How Can We Prevail In The World?

Actually I have been living in an area, which remained the center of war on terrorism for the last few years. I saw many people killed in front of my eyes. I have seen the women and children running for the lives when the Pakistani jets started bombing the areas. I still remember the day as at that time I was in Bajaur Agency. More 4000 people have been killed in the fighting. Almost half a million people have left their area and now they have been living in the rufugees. I saw the death and destruction in my areas. I heard the cries of wailing mothers and sisters. Though I have been living in Bajaur Agency, tribal areas situated on Pak-Afghan border, but I failed in my bid to stop the war. The whole town has been destroyed.
Now I am simply putting this question to all the peace activits that how we can prevail in stopping further death and destruction. Just keep in mind the tears of mothers and sisters sometime turn into storm. I think this is the responsibility of everyone living in this world to play his/her role. How we can prevail in stopping the war. I think there is no reason for war. As far as the problems are concerned we can solve them through negotiations. If we are doing something wrong then you have the right to ask us to stop doing the wrong thing. This is not necessary that army will be used for stopping the wrong-doings. I think with peace we can do this.
Now just tell me how we can play our role? How can we form a peace force? These are the questions which can be discussed. But we must play a role in saving the world from further death and destruction.

Permalink Reply by Charlie Kirkpatrick on March 25, 2009 at 10:24am
We can turn this thing around! We can stop the madness then end this wave of terror and destruction, but we must act now! On a planet where weapons of mass destruction are available to anyone who can pay for them, if all out global nuclear warfare were to break out, the human experiment on planet earth would surely be put on hold and maybe even terminated by way of self destruction!

We must reverse this tide of terror and destruction which now threatens our very existence! This will empower us to stop the madness that has us on a dead end course straight into another age of darkness on earth! The question that now comes to mind? “Are there any other options open to us other than that of war, terror and destruction?”

But please, not from the point of view of those trapped on the treadmill of matter who have isolated themselves from the laws and forces that govern the universe! Some of us actually believe that the only aspect of ourselves is that of matter, in spite of the fact that as we observe our planet from a point located in deep space, we are invisible as matter. You have to get a close up view of our planet to even see us as matter! We all believe in many different stories, dreams and tales that supposedly explain how we all came to be.

We refer to these stories and tales as Religion!

Because these religions do not have to be based in proven scientific fact and logic, we accept many strange, unnatural events and behaviors as our reality even though they only serve to keep us divided. A better, more enlightened point of view is the view that reflects the scientific approach!

Permalink Reply by Muhammad Khurshid on March 25, 2009 at 3:12pm
Thank you very much for your thought-provoking comment. You are absolutely right in your comments. But what I want. I want that how can form a united group whose voice can be heard. Now a lot of people have been talking of peace, but still they are divided. Our voice is not being heard. I want that our voice must be heard. I think the ipeace can be good forum for bringing change in the world. If we say that we can do and we will do then we can bring the change. Actually now this the high time that some saner elements must prevail and stop the mad rulers from further death and destruction. We all are human beings and are one. We are the creatures of One. Therefore, we all should be one in our struggle for peace.

Permalink Reply by Swampthing on March 25, 2009 at 3:58pm
I stumbled upon your heart-breaking confession and concerns. What a horror you have had to face and I pray you are sane in the midst. This world of egos-run-amok must be tempered by love, wisdom, and true heart sanity.

Indeed this is the turning point moment for humankind as a species, to grow beyond tribalism, into a global cooperative order of human beings, and indeed all earthkind. That is the only possible sustainable future for all, especially the children. We are all brothers and sisters, whatever our apparent upbringings in difference.

And this global cooperative order has been most compassionately proposed, outlined, guided, and expressed in form in the book Not-Two IS Peace by the World-Friend Adi Da. And Adi Da says ""Only everybody-all-at-once can change the current chaos." The entire human family awakening as everybody-all-at-once is the only power on earth capable of changing this madness. And so let the Awakening be so, now and everywhere!

We are one family. Humankind exists in a prior unity. Reality is this, and the human heart knows reality. The time for this global awakening is upon us, one at a time, and everybody-all-at-once. This is the true global activist movement of possible human futures.

"There is no difference between people. Human beings are a SINGLE species — and, fundamentally, they are all the SAME. The various colors do not make any difference. Races of human beings are variations of minor genetic changes that developed as human beings wandered the planet and lived under various conditions over thousands of years. Of course, in each place where human beings settled, they developed particular philosophical views and cultural characteristics. Nevertheless, the changes that occurred and the differences that developed are sheerly incidental and minor.

It is important for everyone to understand that HUMANKIND, as a species (and as a whole), is (and always has been) characterized by a constant and global process of diaspora. All of humankind is wandering all over the Earth. Humankind (and even life itself, as a singular whole) is, historically and characteristically, DISPERSED (or scattered). However, in its fragmentation (as many and separate everythings), humankind is, now, acting as if it is not one thing, but, rather, as if it were many different and separate somethings — as if tribal differentiation into national, and religious, and cultural particularity, and distinct racial groupings, and distinct language types, and so forth, amounts to a fundamental difference-making force that should redefine humankind, not as one indivisible species, but as many separate and competing species."

--The World-Friend Adi Da, from Not-Two IS Peace

Permalink Reply by Muhammad Khurshid on March 25, 2009 at 4:17pm
Thank you very much my dear Will. You are absolutely right that we all brothers and sisters. Actually we are the creatures of One Creator. We have the same hearts, the same feeling and the same bodies. We all feel the pain. We all one. At the moment we have been living in a very difficult situation as our areas are the center of war on terrorism. I have been seeing deaths and destruction, which had badly affecting me mentally and bodily. Let us pray for peace in the whole world. Let us pray for peace in Bajaur Agency.

Permalink Reply by susan chandel on March 26, 2009 at 2:59am
You are probably in the best place to see what is happening, as horrible as it is. I can't even think of how to work diplomatically to end this destruction... though I know it is the way because death and destruction only leads to more death and destruction. We are trying to plan a movement for peace in solidarity with all citizens of the world. I have written my thoughts on what that might look like but it is a demonstration It is good to have the stats some pictures some voices from the heart of destruction. I am so sorry that there are such dark corners in the world.

Permalink Reply by Muhammad Khurshid on March 26, 2009 at 8:06am
Dear friend susan chandel, A lot of thanks for your kind comment. Actually I have been living in extreme terror and fear as no one here is ready to hear my voice. Actually there are some people, who have made the war as their business. They have been earning dollars through war. This is the reason that they will always oppose any move for the peace. I am facing opposition in my hometown because the people want the war may continue. This is my belief that war cannot solve the problems. War always increased the problems. This is my own experience. Now the whole world wants peace, therefore, I am hopeful that I shall also see peace in my life time. I am just praying to God the Great to please give us the peace. Peace is very very important.
Dear susan chandel, you voice for peace is very important. Please keep me remember in your thoughts and prayers. May God the Great give you all the happiness in this life and in the life hereafer if there is any.

Permalink Reply by SunBôw on March 27, 2009 at 1:04am
There are many things we can do for Peace in our every day life. But to make a global change we need to get together.

What about if we start with something like this? 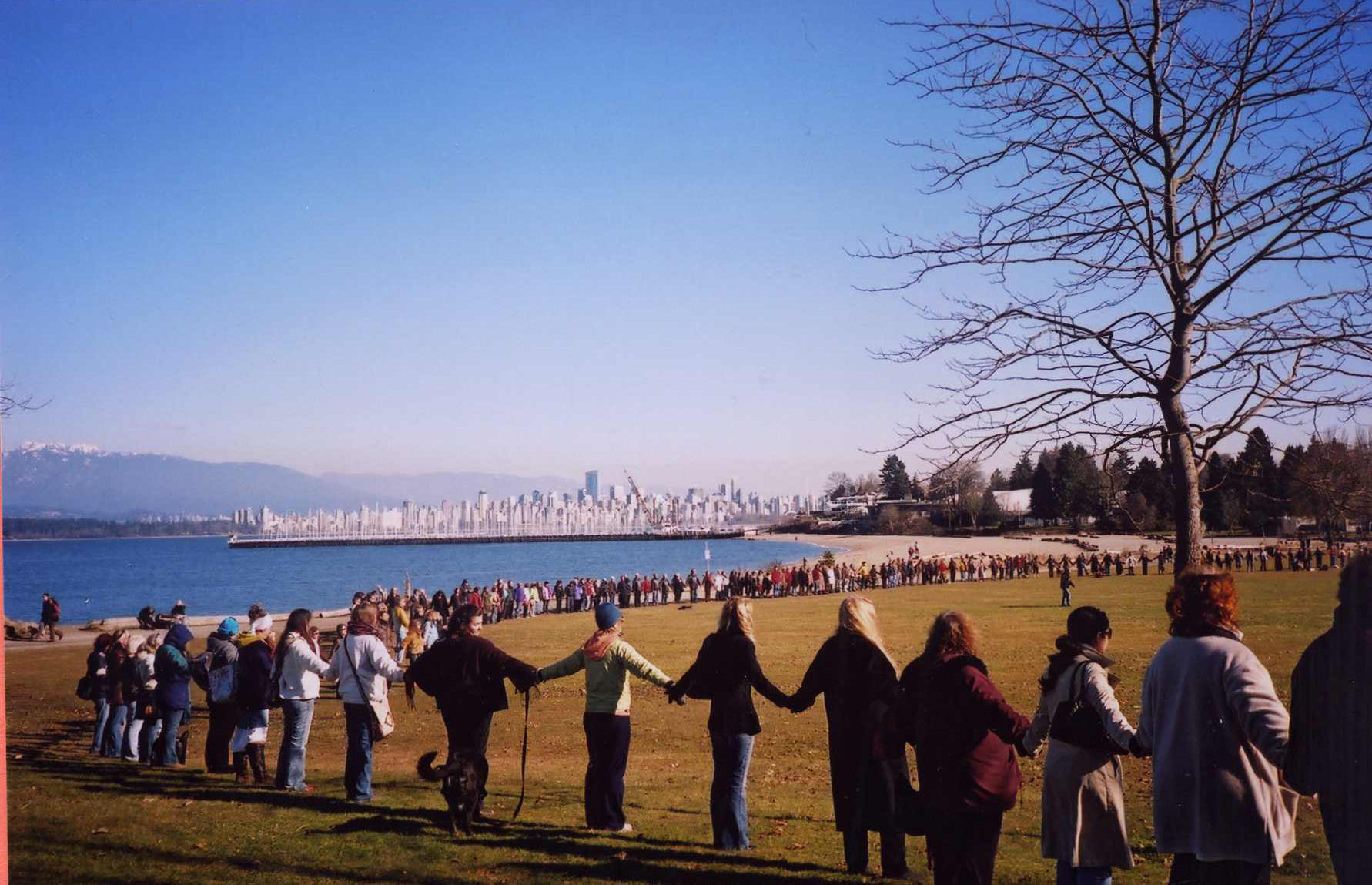 Peace on Earth to all humans of good will.

Permalink Reply by Muhammad Khurshid on March 27, 2009 at 7:41am
Dear SunBôw,
Thank you very much for your kind comment. I think you are right. We can bring the change if we start a united struggle. I accept your suggestion as I also consider this is the best way for achieving peace in the whole world. Just keep in mind presently I am living in a very difficult situation.

Permalink Reply by Muhammad Khurshid on March 28, 2009 at 9:26am
Dear Minerva, I think they should be dealt with an iron hand. I think sometime use of force can be justified for holding the peace. The criminals whether they have been living in tribal areas or elsewhere in the world should be brought to the court of law. I think in this way we can control terrorism in the world. We must use all means for bringing peace to the world and establishing rule of law.