SIGNS OF THE TIME

The star that heralds Maitreya's emergence

'In the very near future, people everywhere will have the opportunity to witness an extraordinary and significant sign, the like of which has been manifested only once before, at the birth of Jesus.

Then, according to Christian teaching, a star appeared in the heavens and led three wise men from
the East to the birthplace of Jesus.
Soon, once again, a star-like luminary of brilliant power will be seen around the world. "
(Benjamin Creme's Master, 'Maitreya's first interview', 5/Jan/Feb 2009)

On 12 December 2008 Share International distributed a news release announcing that in the very near future a large, bright star would appear in the sky visible throughout the world, night and day, heralding the imminent appearance ofMaitreya in His first interview on a major US television programme.
Since early January 2009 sightings of the star have been reported all over the world and hundreds of sightings have been sent to Share International.
We include a selection of the latest reports from the media,
Share International readers, and sightings from YouTube. All are genuine sightings confirmed by Benjamin Creme's Master to be the 'star'. 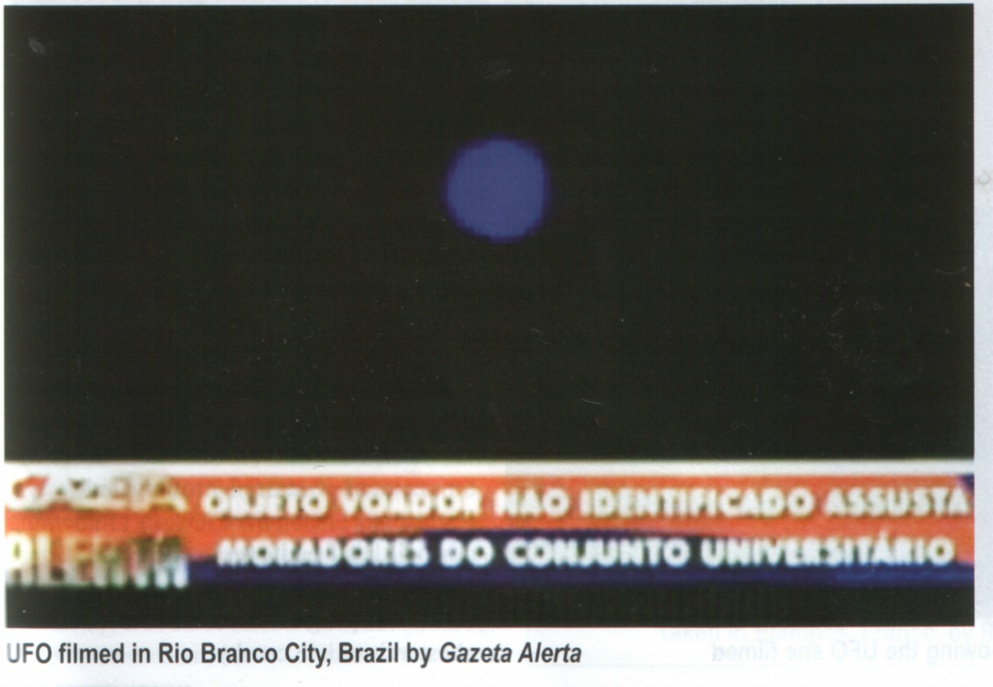 On 8 February 2009, during the live television programme GazetaAlerta in Rio Branco City, Brazil, the film crew spotted an object in the sky changing colour from white, to red, to blue. The live coverage continued as they filmed the object for more than two hours, with more than 25 people witnessing
the event. The object moved from east to south and then from south to west.
(Source: YouTube) 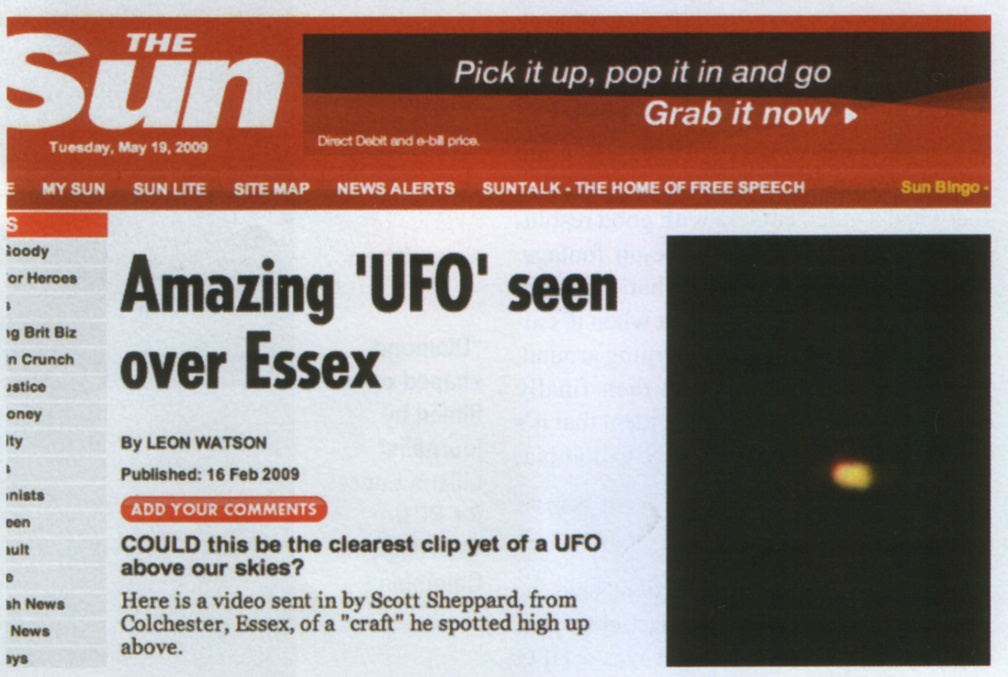 The Sun, UK
On 16 February 2009 The Sun newspaper included a report from Scott Shepperd of a bright light or "craft" spotted over Colchester, Essex. A video of his sighting was placed on the newspaper's website. Shepperd had been to the cinema with a friend before he captured the dazzling light in the sky.

He said: "As I was about to get in the car to go home, a golden ball of light no higher than 100 ft above me caught my attention. I said to my mate to look, he ignored me and said its probably just a plane. I asked him to check anyway and, just as he did, it started moving over the top of us.
It was very bright orange and moved very quietly: it had no flashing light which made me question if it was a plane.
Quick as I could, I got out my mobile phone to video it but by the time I had got it out and set it up it had moved
pretty far away."
(Source: The Sun, UK) 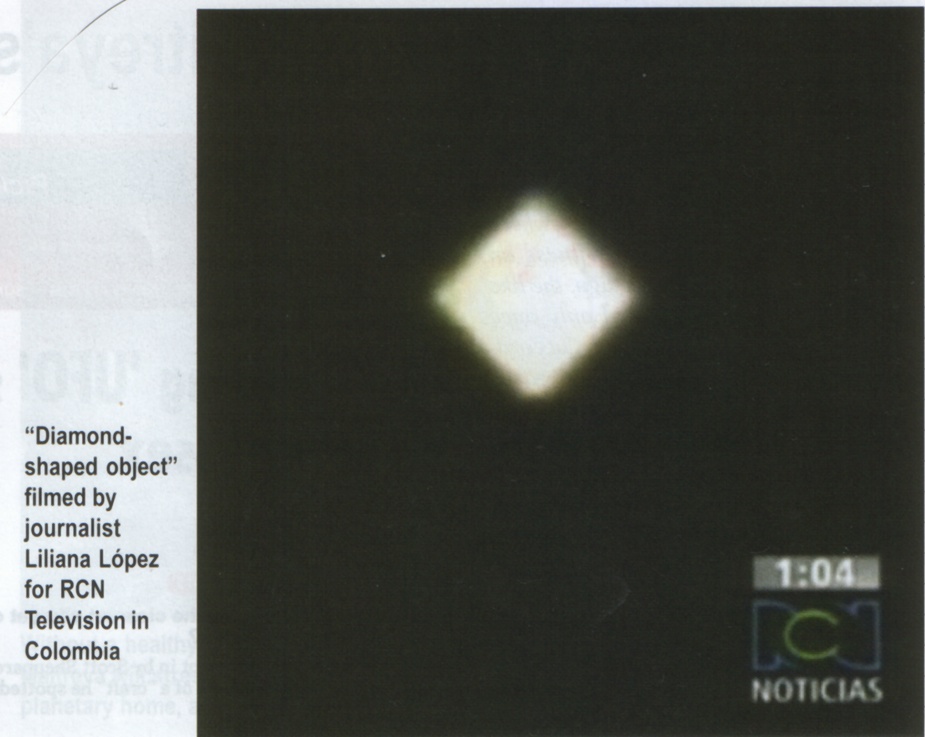 Colombia Television news channel RCN Colombia reported an incident which took place on 15 April 2009 in Pereira, capital city of the state of Risarald. Announcing that a "journalist films a UFO in Pereira, the spaceship flew over several buildings", it told how television journalist Liliana Lopez saw a gigantic, bright light in the sky from her eighth-floor
balcony at 9.20pm. She captured the diamond-shaped object on her video camera and reported that it emitted a multi-coloured light. It drifted across the sky for several minutes and then mysteriously disappeared.
UFO experts are investigating the extraordinary footage.

Lopez recalls: It! saw a very big, resplendent light in the sky, certainly not normal at all. It was easy to see it was not a star
or a plane and taking advantage of the fact that I had a video camera with good resolution I tried to get some close-up footage.
You can see quite clearly what a strange object it is. There is a moment when it's already going away - it starts turning around, around, around, around and then finally moves away - it's perfectly evident that it's a "spaceship".
(Source: RCN Colombia; YouTube) 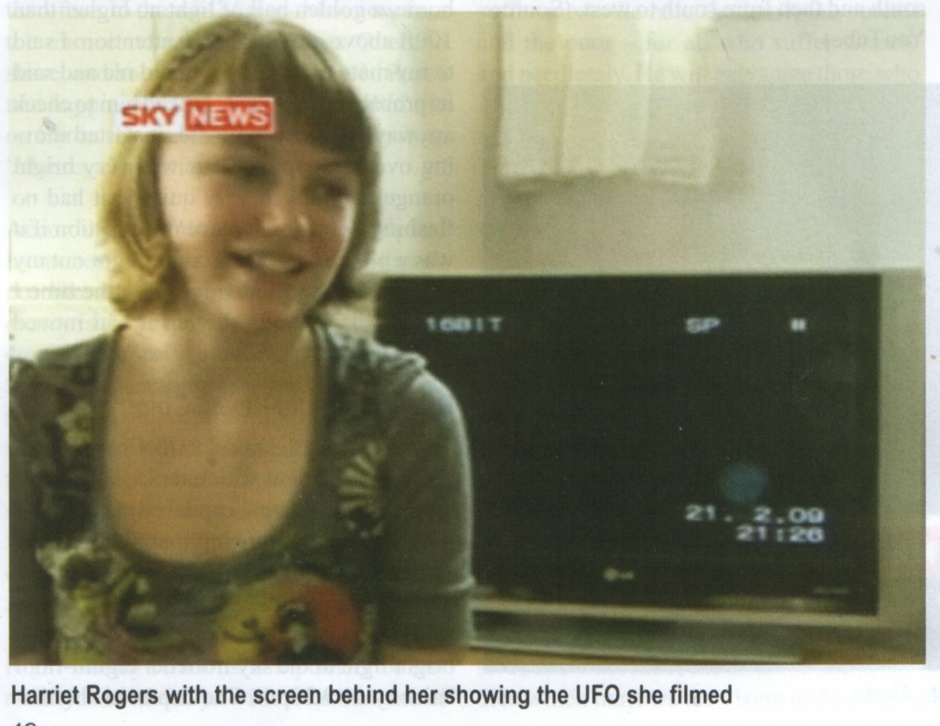 On 22 March 2009 Sky Television News interviewed thirteen-year-old Harriet Rogers who filmed what she thought was a UFO hovering above Shrewsbury, England.
On 21 February 2009, after a call from her grandmother about a bright light in the sky, Harriet and her father went upstairs to have a look and saw a brilliant ball of light pulsing and changing colours.
Harriet explained:
'To the human eye, it just looked like a bright light but, on the video camera we could see it pulsing, then suddenly
changing colours.
They decided to go out and follow the light to try to get a bit closer and they started to notice it was going down beyond the horizon.
She added: 'This is when you could see with your own eyes that it was pulsing and changing colours. We stopped in a layby and rested the camcorder on a gatepost where we got the best shots.
We could see how it was getting much brighter than before."

Asked by a Sky reporter if she thought it was a UFO
Harriet said: "Yes. It's come back, it's definitely come back, literally every starry night."

"Orange UFO spotted above Chester skies" is the headline in the Chester Chronicle on 30 April 2009. Marty Wilbur was standing on his balcony using his mobile phone when he saw a "pulsating orange light" rising up in front of him at 9.02 pm on 26 April 2009.
He filmed the mysterious orange glow as it tracked northwards and disappeared.
"I could see this orange ball rising up. at a 90-degree angle, straight up. then it just sat there, sat still for a few seconds. To my amazement it started moving sideways.
Right away I recognized it wasn't something normal that I had ever seen before.
There was no sound at all. All you can hear are birds chirping on the video."
(Source: chesterchronicle.co.uk) On 25 April 2009 at 3.30am a group of security guards outside a hotel in the coastal town of Kemer, Turkey, saw an unusual object hovering over the ocean and photographed it.

Security guard Erman Bulut was at the front of the hotel when he saw the hexagonal object doing impossible manoeuvres
above the sea and changing shape and colour.

He recalls: "At first I couldn't understand what I was witnessing. I saw this large object rising from the sea. It definitely wasn't
a plane or balloon. It was leaving a trail and it was glowing. My hands were shaking from the excitement. As it descended towards the sea I ran to the beach but then it began to rapidly rise eventually merging with the stars. It was hexagonal, orange and fluorescent.
As far as I am concerned it was definitely a UFO. One does not get the chance to see such things often and I feel lucky to
have witnessed this. When one takes into account the size of the universe and the number of stars, UFOs and aliens become a certainty."

Erman's co-workers Mehemet Aydin and Sezgin Cesur also saw the object and described it. "It was hexagonal but at times it's shape changed. It descended and then rose, disappearing into the sky. "I didn't sleep all night from excitement" concluded Mr Cesur.
(Source: Milliyet Kemer News, Turkey)

According to All News Web, formations of UFOs have been seen above cities throughout the world in the first few months of 2009.
In China, reports the website, a UFO was filmed by a Beijing tourist on 18 February 2009 in Kashgar in Xinjiang Uyghur Autonomous region along the ancient Silk Road.

"Me and my father were walking through a park near the Science and Technology Complex returning to our hotel when I noticed a very bright and clear object in the sky that appeared too close and too bright to be a star," said Lee Kwan Hing.
"I used a Panasonic High Definition camcorder to take the film. As I zoomed in on the object I noticed that it had the form of a yo-yo and I could make out geometric patterns on the object.
Is it a UFO, a satellite or a star?" he asks. "Perhaps an All News Web reader can help Hing solve this mystery," suggests
Michael Cohen of All News Web.
(Source: allnewsweb.com)