The "star". Crop formation in a field of yellow flowering canola(oilseed rape). 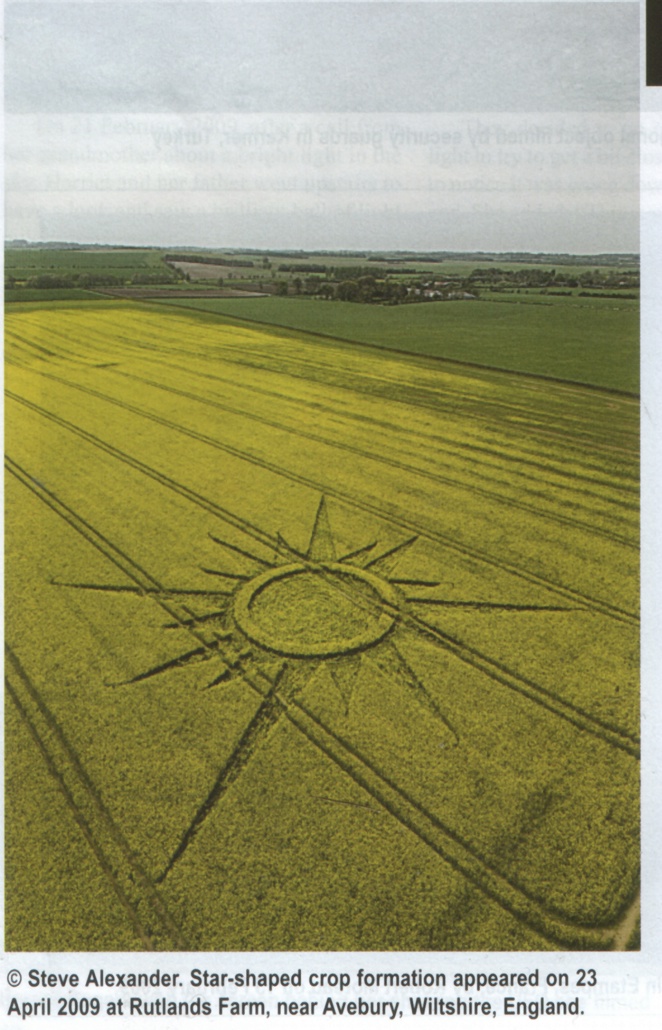 On 23 April 2009 a large crop formation appeared in a field at Rutlands Farm near Avebury, in Wiltshire, England. The beautiful, symmetrical pattern resembles a star - a central circle sur-
rounded by 16 rays of different lengths - and appeared in a field of yellow flowering canola (oilseed rape.)
The formation measures 298 feet at its longest with a 66 foot diameter central circle.

Rape seed, with its thick, brittle stalks and profuse pollen, is one of the most difficult crops to walk in, yet, according to Charles Mallett of the Silent Circle Information Centre, this new formation is one of the "most elaborate and geometrically sophisticated oilseed rape/canola formations that have occurred in British crop circle history ...
Right now in 2009, we've had really huge, serious formations! This has never really happened before - kind of unprecedented."
Steve and Karen Alexander have been photographing and researching the crop patterns for over 15 years and for the past ten have produced an annual Year Book displaying the best
formations each year.
On 20 May 2009 Share International asked Steve Alexander whether the complex patterns already
appearing in the fields of Wiltshire, England, were unusual for this time of year.

Steve Alexander: "Between April and late May each year we normally see only a few crop circles in oilseed rape crop. Some years we don't get any at all. In 2009, we have had an incredible
eleven formations. What is impressive this year, is the size, and quality of the oilseed rape formations.
The formation which appeared at Clatford in Wiltshire was measured at 700 feet in length!

Some researchers are expecting a phenomenal summer, as the crop circles at this early
part of the season have already out-stripped expectations."
(Source: temporarytemples.org.uk;earthfiles.com)

(Benjamin Cremes Master confirms the formation was created by the Space Brothers and is a sign of the presence of the 'star'.)