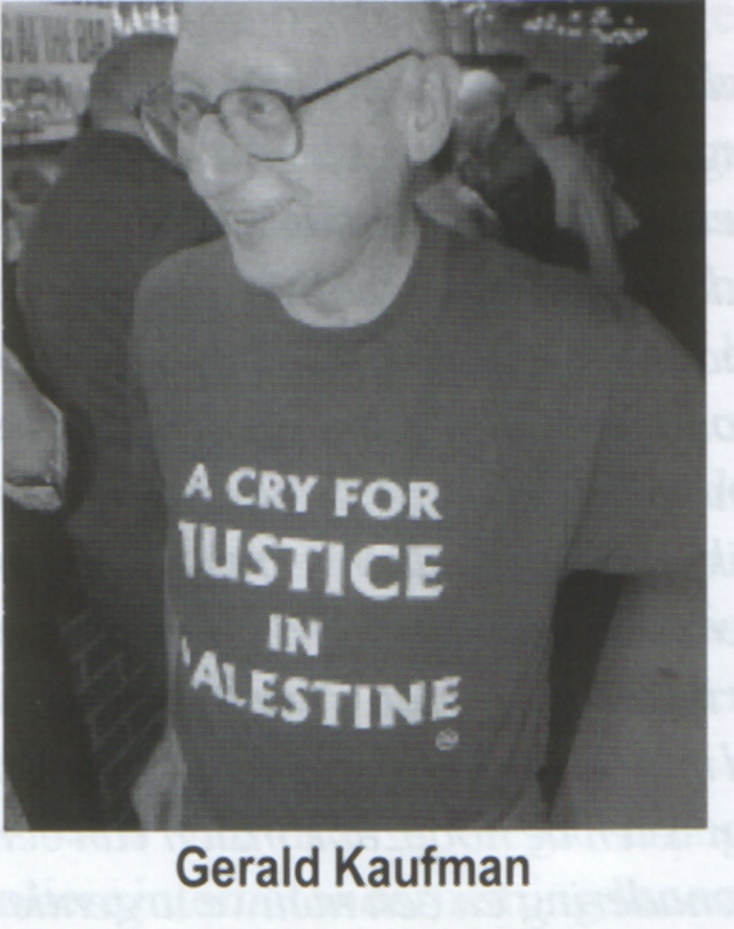 "We the undersigned are all of Jewish origin," they wrote.
"When we see the dead and bloodied bodies of young children, the cutting off of water, electricity and food, we are reminded of the siege of the Warsaw ghetto.

"When Dov Weisglass, an adviser to the Israeli Prime Minister, Ehud Olmert, talked of putting Gazans 'on a dieft and the deputy defence minister, Matan Vilnai, talked about the Palestinians experiencing 'a bigger shoah' (holocaust), this reminds us of Governor General Hans Frank in Nazi-occupied Poland, who spoke of 'death by hunger....

'The time for appeasing Israël is long past.
As a first step, Britain must withdraw the British ambassador to Israël and, as with apartheid South Africa, embark on a programme of boycott, divestment and sanctions." (Source: stopwar.org)

UK Jewish MP Gerald Kaufman spoke out in Parliament on 17 January 2009:
"A Nazi soldier shot [my grandmother] in bed. My grandmother did not die to provide cover tor Israeli soldiers murdering Palestinian grandmothers in Gaza.

The current Israeli government ruthlessly and cynically exploit the continuing guilt among gentiles over the slaughter of Jews in the Holocaust as justification tor their murder of Palestinians.

"On Sky News a few days ago, the spokeswoman for the Israeli army. Major Leibovich, was asked about the Israeli killing of, at that time, 800 Palestinians. The total is now l ,000.
She replied instantly that '500 ofthem were militants'.
That was the reply of a Nazi.
I suppose the Jews fighting for their lives in the Warsaw ghetto could have been dismissed as militants." (Source: jewssansfrontieres.blogspot.com) •

Permalink Reply by Serge Da Sylva on March 10, 2009 at 1:13am
Thank you for this post. Again we can only realize that there is a difference between a citizen and his goverment. Israel has excelent and brave pacifists, We need to support them and support a peace mouvement in Palestine as well.