I'm sure that if Gandhi were alive he would be recruiting people to help release Aung San Suu Kyi from prison in Myanmar. Bono (U2) and many others are doing their best. Thank you. "Aung San Suu Kyi wins top Amnesty honor (Jul 27, 2009)". Hey you: read and help to spread it everywhere, in forums and by e-mail (use the attached file)!! 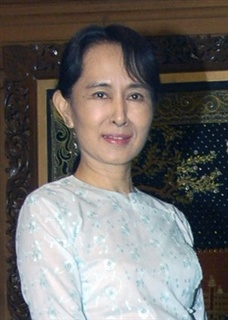 The human rights watchdog earlier said it hoped the Ambassador of Conscience Award would help protect her as she faces a potential prison sentence.

"Her crime is that, if she was free to participate in elections, she would win. This week the brutal force that has her incarcerated will decide if she spends the next five years in prison," Bono said. He added his wish that Suu Kyi's latest international honor "will help keep her safe."

Amnesty International leaders said the award was timed to coincide with the 20th anniversary of Suu Kyi's initial arrest on July 20, 1989, as she led a campaign to oust Myanmar's military dictators.

Suu Kyi's opposition party, the National League for Democracy, won national elections in 1990 but the military refused to relinquish power. She won the Nobel Peace Prize in 1991 but has been under house arrest for 14 of the past 20 years.

Suu Kyi, 64, is on trial for allegedly harboring an American who swam out to her residence uninvited. The offense of violating house-arrest rules carries a potential five-year prison sentence, and foreign diplomats have been barred from key parts of her trial. Suu Kyi's supporters accuse Myanmar's junta of seeking to put her behind bars until after elections planned for 2010.

Former Czech President Vaclav Havel, a fellow Nobel recipient and the first winner of the Ambassador of Conscience Award in 2003, said foreign recognition probably has deterred Myanmar's rulers from imposing even harsher punishments on Suu Kyi.

"I know from my own experience that international attention can, to a certain extent, protect the unjustly persecuted from punishments that would otherwise be imposed. ... Goodness knows what would have happened if her fate had not been highlighted as it is again today," Havel said in a statement.

U2 -- which won the top Amnesty honor in 2005 in recognition of Bono's humanitarian campaigning -- has been honoring Suu Kyi at each performance of the band's ongoing European tour. More than 100 people walked on stage Monday night, holding Suu Kyi masks over their faces, as U2 performed its 2000 song honoring Suu Kyi, "Walk On."

An Amnesty International official who attended the concert, Donna Jean Guest, said the London-based organization hoped one day to be able to present Suu Kyi the award in person. Amnesty officials were permitted to visit her most recently in 2003.

"She should never have been arrested in the first place," said Guest, Amnesty's deputy director for the Asia-Pacific region. "We have been very concerned from the start that the authorities would use any pretext to lock her up until after the elections."