I GET BY WITH A LITTLE HELP FROM MY FRIENDS!

SPECIAL NOTE TO MY FRIENDS: THANKS FOR THE SUPPORT! I LOVE YOU ALL! *SMILE* --CHRISTIE
*******
One day while exploring New York City some friends got together...and helped one another. Just a montage of clips meant to be friendly, kind, a little lovey-dovey and cute... So, don't go searching for some kind of epic meaning...*smile*

Music: With A Little Help From My Friends (from "Across The Universe" originally by The Beatles)

BTW, This video is not about the artists who perform the song, it's about "hangin' with your friends." The music is just to set the tone, not hit the top forty charts! LOL!


Find more videos like this on iPeace ****************
THESE ARE THE COMMENTS THIS VIDEO HAS RECEIVED, SO FAR... WHAT DO YOU GUYS THINK OF IT?
I BELIEVE THERE'S NOTHING MUCH SWEETER THAN THE LOVE BETWEEN YOUNG GIRLS WHO HAVE BEEN FRIENDS SINCE PRE-SCHOOL DAYS. THE TRUST AND LOYALTY THEY SHARE IS BEYOND BELIEF, AND OF COURSE, THE LOVE!! WE COULD ALL TAKE A LESSON FROM THAT.
***************

Permalink Reply by MommaToldMeNotToCome on September 14, 2009 at 9:07am
How is that Joni? in what way? do you agree with my opinion? Girls... just before they fall in love with that first special boy... or girl (let's be honest here) are in love with life and their friends... they hang together and talk about what they want out of life, share their dreams, their joys, their tears... and fears. It's friendship in the tightest meaning of the word. The only thing that approaches it is two or three guys that operate with one brain, one heart and one mind. I know a few doubles and trios like that. This has nothing to do with sexuality, you understand. I KNOW you understand Joni, but others might get the wrong idea. So what do you think? Am I right? :D

Permalink Reply by MommaToldMeNotToCome on September 16, 2009 at 6:25am
Friends don't need much in the way of toys to enjoy their time together... I remember the "rambling days" of my youth all to well! 'something magic about "messing around with water" too, that starts when you're just a little kid. Right now, It would be lovely to grab an apple, shove some line, hooks and sinkers in a pocket, check for knife, matches and salt, then head out the door to go fishing for the day... oh yeah, girls do that to.. and we can cut a willow pole with the best of them.. :D .... never brought anything home because we ate everything we caught! lol! Those were the days.... 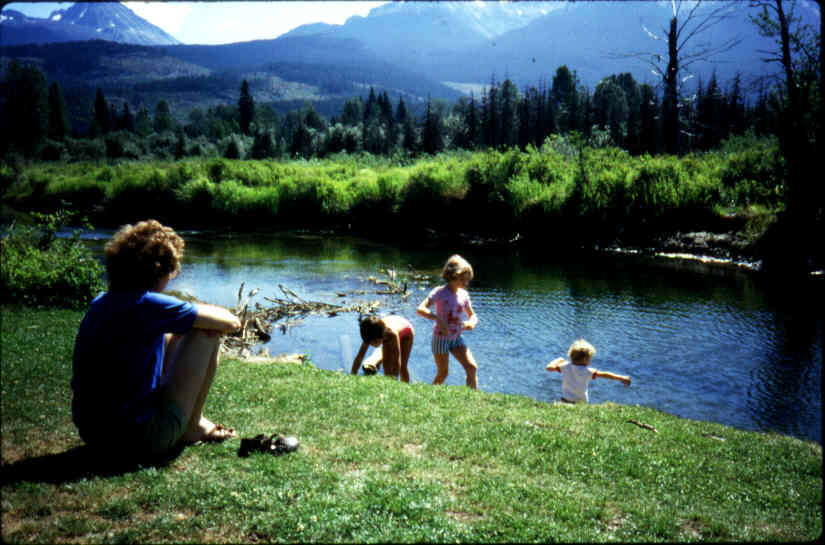 Permalink Reply by MommaToldMeNotToCome on September 16, 2009 at 9:16am
That sounds lovely Grace! I spent many happy hours catching frogs tadpoles, minnows, etc when I was a child and did more of the same while teaching my children :D Toads seem to mostly come out at night (after dark) so never had much to do with them. My mother could hear a floor board creak at a thousand paces so there was no sneaking out to play in the moonlight, tho it kept me awake calling to me, many a night... sigh... thanks for the memories, new FRIEND! Welcome to this group. :D

Permalink Reply by MommaToldMeNotToCome on September 16, 2009 at 6:09am
Even doing, "Not much of anything," can be fun with a friend beside you. Wonderful video, Frank and if I can find the time, the song will be on my music player before morning! hehe! Such a lovely combo of "It's A Wonderful World" and "Somewhere Over the Rainbow!" Thank you my friend! BTW, I sure would like to sink my teeth into a slice of that watermelon.... hahaha!

Permalink Reply by George Lane on September 16, 2009 at 1:01pm
boy that is just like my oldest and her Friends there all great.thanks!
Attachments:

Permalink Reply by MommaToldMeNotToCome on September 16, 2009 at 1:27pm
Wow! Great group shot of your kids and friends! Beautiful fountain in the background. What were you all celebrating? Or were you there that day? Yep, that's the way they are at that age... I've seen my girls piled six deep or more with their friends, all on the couch watching the tube while other places sat empty...they're like puppies that way, all in a heap! :D

Permalink Reply by George Lane on September 17, 2009 at 10:40am
yes we had a great day at the taste of Chicago just before the 4th of July
and closed the day at the museum of art
Attachments:

Permalink Reply by MommaToldMeNotToCome on September 21, 2009 at 1:18pm
Awesome pics, George! I think the one with the "lion" in it is my favorite! Thanks for sharing! Sounds like the "perfect day" to me! Bet your family enjoyed it! :D --Christie

(sorry it took me awhile to find this one... I saw it on your page a few minutes ago! :D )