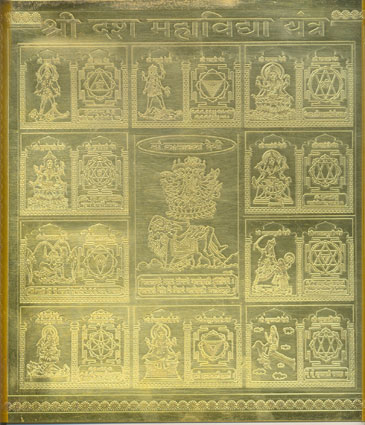 The Ten Mahavidyas are known as Wisdom Goddesses. The spectrum of these ten goddesses covers the whole range of feminine divinity, encompassing horrific goddess's at one end, to the ravishingly beautiful at the other. Mahavidya means (Maha - great; vidya - knowledge) Goddesses of great knowledge. These Goddesses are:Mahavidyas - The ten forms of Shakti.

Shodashi the Goddess who is Sixteen Years Old

Bhuvaneshvari the Creator of the World

Chinnamasta the Goddess who cuts off her Own Head

Bhairavi the Goddess of Decay

Dhumawati the Goddess who widows Herself

Bagalamukhi the Goddess who seizes the Tongue

Matangi the Goddess who Loves Pollution

Kamala the Last but Not the Least

Once during their numerous love games, things got out of hand between Shiva and Parvati. What had started in jest turned into a serious matter with an incensed Shiva threatening to walk out on Parvati. No amount of coaxing or cajoling by Parvati could reverse matters. Left with no choice, Parvati multiplied herself into ten different forms for each of the ten directions. Thus however hard Shiva might try to escape from his beloved Parvati, he would find her standing as a guardian, guarding all escape routes.

Each of the Devi's manifested forms made Shiva realize essential truths, made him aware of the eternal nature of their mutual love and most significantly established for always in the cannons of Indian thought the Goddess's superiority over her male counterpart. Not that Shiva in any way felt belittled by this awareness, only spiritually awakened. This is true as much for this Great Lord as for us ordinary mortals. Befittingly thus they are referred to as the Great Goddess's of Wisdom, known in Sanskrit as the Mahavidyas. Indeed in the process of spiritual learning the Goddess is the muse who guides and inspires us. She is the high priestess who unfolds the inner truths.

A Brief about the Das Mahavidyas

Kali is mentioned as the first amongst the Mahavidyas. Black as the night (ratri) she has a terrible and horrific appearance. The word 'ratri' means "to give," and is taken to mean "the giver" of bliss, of peace of happiness.

Literally the word 'tara' means a star. Thus Tara is said to be the star of our aspiration, the muse who guides us along the creative path.

Shodashi - the Goddess who is Sixteen Years Old

The word 'Shodashi' literally means sixteen in Sanskrit. She is thus visualized as sweet girl of sixteen. In human life sixteen years represent the age of accomplished perfection after which decline sets in. This girl of sixteen rules over all that is perfect, complete, beautiful.

Bhuvaneshvari - the Creator of the World

The beauty and attractiveness of Bhuvaneshwari may be understood as an affirmation of the physical world, the rhythms of creation, maintenance and destruction, even the hankerings and sufferings of the human condition is nothing but Bhuvaneshvari's play, her exhilarating, joyous sport.

Chinnamasta - the Goddess who cuts off her Own Head

The image of Chinnamasta is a composite one, conveying reality as an amalgamation of sex, death, creation, destruction and regeneration. It is stunning representation of the fact that life, sex, and death are an intrinsic part of the grand unified scheme that makes up the manifested universe.

Bhairavi - the Goddess of Decay

Bhairavi embodies the principle of destruction and arises or becomes present when the body declines and decays. She is an ever-present goddess who manifests herself in, and embodies, the destructive aspects of the world. Destruction, however, is not always negative, creation cannot continue without it.

Dhumawati - the Goddess who widows Herself

She is the embodiment of "unsatisfied desires." Her status as a widow itself is curious. She makes herself one by swallowing Shiva, an act of self-assertion, and perhaps independence.

Bagalamukhi - the Goddess who seizes the Tongue

The pulling of the demon's tongue by Bagalamukhi is both unique and significant. Tongue, the organ of speech and taste, is often regarded as a lying entity, concealing what is in the mind. The Bible frequently mentions the tongue as an organ of mischief, vanity and deceitfulness. The wrenching of the demon's tongue is therefore symbolic of the Goddess removing what is in essentiality a perpetrator of evil.

Matangi - the Goddess who Loves Pollution

Texts describing her worship specify that devotees should offer her uccishtha (leftover food) with their hands and mouths stained with leftover food; that is, worshippers should be in a state of pollution, having eaten and not washed. This is a dramatic reversal of the usual protocols.

Kamala - the Last but Not the Least

The name Kamala means "she of the lotus" and is a common epithet of Goddess Lakshmi. Lakshmi is linked with three important and interrelated themes: prosperity and wealth, fertility and crops, and good luck during the coming year.

In their strong associations with death, violence, pollution, and despised marginal social roles, they call into question such normative social "goods" as worldly comfort, security, respect, and honor. The worship of these goddesses suggests that the devotee experiences a refreshing and liberating spirituality in all that is forbidden by established social orders.

The central aim here is to stretch one's consciousness beyond the conventional, to break away from approved social norms, roles, and expectations. By subverting, mocking, or rejecting conventional social norms, the adept seeks to liberate his or her consciousness from the inherited, imposed, and probably inhibiting categories of proper and improper, good and bad, polluted and pure. Living one's life according to rules of purity and pollution and caste and class that dictate how, where, and exactly in what manner every bodily function may be exercised, and which people one may, or may not, interact with socially, can create a sense of imprisonment from which one might long to escape. Perhaps the more marginal, bizarre, "outsider" goddesses among the Mahavidyas facilitate this escape. By identifying with the forbidden or the marginalized, an adept may acquire a new and refreshing perspective on the cage of respectability and predictability. Indeed a mystical adventure, without the experience of which, any spiritual quest would remain incomplete.

Excellent effort for a candid exposition. Congrats. Perfection being a movement of becoming less and less imperfect so that the Infinite Perfection which is already an accomplished spiritual fact would manifest to oneself and in turn to others who come in contact with that presence, more needs to be added here.

Just as the coconut water is placed well protected within the shell, fiber and the link with the tree a so that its sweetness and nourishing qualities remain fresh and live the spiritual truths are well placed within spiritual stories, episodes and anecdotes in the Tantra tradition. As even nothing remains to be discarded after the sweet water is taken, that is, the shell, fiber and anything else are used creatively to make decorative, rope and such items, the Tantra teachings serve the integral purpose of transforming the wave into an ocean and fill the ocean into the wave!

The shift of vision from the grossest to the subtlest can be spiritually comprehended only in the intimate and immediate presence of a Master. A story, told by a Master, read for the second time would yield another meaning and so on... So is the case with the Ten Great Wisdom Goddesses.

The geometrical patterns known as Yantras of these Goddesses are already there within all. So too are the Mantras, their sound patterns.

All these are gathered into OM and can be seen gathered while in at-one-ment with a Master.

Salutations to the Divine Parents residing in the hearts of all. Permalink Reply by Mani kutty on December 22, 2008 at 9:00am
Rick,
What a fantastic info you have given us which many of us do not know.Merry Christmas and a very happy and peaceful New Year from my family to yours,

Permalink Reply by Rajesh Dhari on December 22, 2008 at 11:29am
No words speechless
JAI SHRI KRISHNA

Permalink Reply by Rick on December 23, 2008 at 12:55am
Dear Brothers...it is an honor to be the simple vehicle by which our Mother spreads Her Love. )O(

(Oh Mother, Oh Sai Bhavani, Jagadambe (all appellations of the Supreme Mother, the feminine aspect of Godhead), You protect the three worlds; You have supreme compassion. Oh Uma, Sharada (different names for Parvathi), please protect us)

(This is a "Praana-prathistaapana" song. The Deity has been sculptured in clay, dried, draped in the finest silk garments, decked with gold and diamond jewelry and placed in the shrine. Before beginning formal worship, devotees chant the "Prana- prathishtapana" song and pray " Goddess Mother, we have prepared the clay statuette. Please infuse it with Your presence. Please breath life into it and make it wake up and come to life" The meaning of the song is: Mother, uplifter of the universe, please wake up. Durga, chandi, consort of Lord Shiva, please make the image wake up into a living vibrant You.)

Permalink Reply by Devanayagi Parameswaran on December 27, 2008 at 1:09pm
Salutations my divine Rick

It is a blessing to all that you have joined us, and are contributing to the discussion. We are thankful to Mr. Mani kutty and Dr. S.Ramakrishnan for helping me to spread the teaching, and now you have joined in to bless this group with your valuable contribution. Please keep the light glowing, so that humanity enjoy the light that all of you radiate.

I like to take the opportunity to also thank Mr. Mani kutty and Dr. S.Ramakrishnan for their contribution