Jetsunma Tenzin Palmo was raised in London and whilst in her teens she became a Buddhist. In 1964, at the age of twenty, she decided to go to India to pursue her spiritual path.
There she met her Guru, His Eminence the 8th Khamtrul Rinpoche, a great Drukpa Kagyu lama, and became one of the first Westerners to be ordained as a Tibetan Buddhist nun. She remained with Khamtrul Rinpoche and his community in Himachal Pradesh, northern India, for six years and then he directed her to the Himalayan valley of Lahaul in order to undertake more intensive practice. Tenzin Palmo stayed in a small monastery there for several years, remaining in retreat during the long winter months.

Then, seeking more seclusion and better conditions for practice, she found a nearby cave where she remained for another 12 years, the last 3 years in strict retreat. She left India in 1988 and went to stay in Italy where she taught at various Dharma centres.
Before H.E. Khamtrul Rinpoche passed away in 1980, he had on several occasions requested Tenzin Palmo to start a nunnery. She understood the importance of this and remembers when in 1993, the Lamas of the Khampagar monastery in Himachal Pradesh India again made the request. This time Tenzin Palmo was ready to take on the formidable task and she began slowly raising interest worldwide.
In January 2000 the first nuns arrived and in 2001 the construction of Dongyu Gatsal Ling Nunnery began and is now, with the ongoing construction of the traditional Temple, nearing completion.

In February 2008 Tenzin Palmo was given the rare title of Jetsunma, which means Venerable Master, by His Holiness the 12th Gualwang Drukpa, Head of the Drukpa Kagyu lineage in recognition of her spiritual achievements as a nun and her efforts in promoting the status of female practitioners in Tibetan Buddhism.
Tenzin Palmo spends most of the year at Dongyu Gatsal Ling Nunnery and occasionaly tours to give teachings and raise funds for the ongoing needs of the DGL nuns and Nunnery. 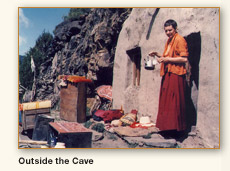