The finding comes ahead of a decision on whether to end or renew a 12-year logging ban in the area.

Writing in the journal Biology Letters, the researchers - from China and the US - tell the government that continuing protection would be cost-effective.

They based their finding on data collected during a five-year forest survey in Sichuan Province.

There are thought to be fewer than 2,500 adult giant pandas in the wild, scattered across mountain ranges in small, fragmented populations.

They are classifed as a "conservation-dependent species", meaning that without protection, they would be on their way to extinction.

Roots of the issue


In Sichuan - the animals' main homeland - teams of observers gathered all kinds of data on forests during the State Forestry Administration's Third National Survey, which ran from 1999 to 2003.

This database has now been mined to see which aspects are most closely associated with the presence of pandas. 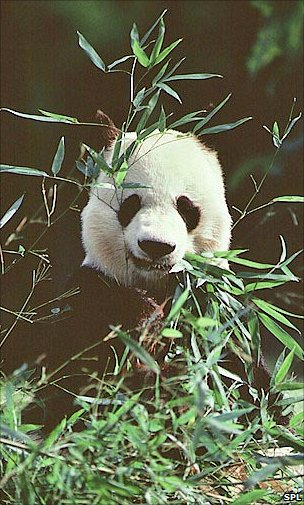 Old forests may stimulate growth of new bamboo, whcih is easier for the pandas to eat

Having bamboo in the area is a key factor that researchers had previously known and understood - hardly surprising, as the plants constitute 99% of the panda's diet.

However, the researchers - led by Zejun Zhang from the Chinese Academy of Sciences in Beijing - discovered that the age of the trees also strongly predicted the existence of pandas.

They suggest this link has not been found before because previous studies looked at small areas only.

Why old-growth forest should be so important is not clear, and data of this type cannot yield the answer.

"One possibility is that the bamboo that grows underneath old growth [trees] is more nutritious," they write.

"Another intriguing possibility is that only old-growth trees grow large enough to form cavities suitable for maternity dens.

"This raises the question: are birth dens a factor-limiting panda population size in reserves with a history of logging?"

Iain Valentine, Director of Animals, Conservation and Education for the Royal Zoological Society of Scotland (RZSS) who has worked on giant pandas with Chinese colleagues for abour five years, commented that understanding the animals' ecological needs was crucial for their long-term survival.

"It could be as simple as that old stands of bamboo produce large new shoots of bamboo at their bases, which are rich in sugars," he told BBC News.

"These large shoots are softer too, and are therefore easier to eat than hard stalks.

"But conversely it could be far more complicated than this and involve complex seasonal nutritional needs of the panda which themselves vary as a result of the bamboo forest structure and age."

RZSS has just concluded an agreement with the Chinese Wildlife Conservation Association to host two giant pandas in its Edinburgh Zoo - the first pandas in the UK for 17 years.

The Chinese authorities have implemented a number of policies aimed at conserving the species - banning trade in skins, setting up reserves, and, in 1998, banning logging throughout the panda's range.

But the logging ban is up for review this year.

The scientists on this study stop short of calling for a continuation; instead, they observe: "It may be more cost-effective to protect the existing old growth than to open it up to logging while protecting an equivalent area of secondary growth forest".