One mans eyes who lived with wolves and his view regarding women.

I do not wish to deviate from Devanayagi Parameswaran's original content, but just wish to add a point of view that I would like to have open for discussion.

I have spent most of my life with wolves, and also living in wilderness.
As a runaway child fled to the wilds for shelter and to survive after my father was killed when I was 12 years old.

I have been places not yet effected by the spirit of modern man, and rather than infect it with my own spirit,
sought to embrace the spirit of the land and walk as one with it, so I would not change it, but rather also in accepting it within me, become like a carrier of a seed of what is very very ancient.

I want to add some modern.
E=MC2
energy and mass are the same thing in 2 different forms.
If I were to describe this to someone with the highest technology of a wheel,
Father and Mother.
Life, is the union.
of energy and mass.
Energy > Spirit > Father
Mass > Earth > Mother

I am head of my household.
But was confused when I left the wilds, by women, and tried hard to fit among my own kind but could not.
They wanted me to destroy the earth (drive a car, buy nuclear powered electricity, own "things")
This was not wise to me. To destroy what gives me life?
I was rejected over and over because of this... wanting of material goods and machines and not caring about what is done to the earth to get them, that, was to them, success.

I met a woman 10 yrs ago who honors the earth, and understands.

I am male.
This makes me only 1/2 human.
I need her help, to help me learn more ways to live with this earth,
and for her to tell me this is what she wants.
Men likely hear a lot what I heard a lot, from women, wanting the big house and nice car....
and that is how you attract and keep a mate.......

I need my wife to help guide me, because I am a man, I want to provide for her,
and I listen to her on what she wants to be more happy and secure.
This one wants to live in a tipi with me. As I did for decades.
She wants me to walk the path of respect and honor of this earth.
Rather than calls me crazy and takes my children from me because, I cant destroy this world,
and be at peace with who I am at the SAME TIME.

I am at peace with my wife.
She does not want me to rape and abuse from this earth nor steal resources from future generations.
The earth gave freely, what was wrong, that we have to force more from her?

My wife is 50, worries about me meeting other women here and other places, who are younger, have $ to offer, or whatever else it is she is worried about.
I think she is nuts! I have a woman of RESPECT and HONOR for this earth.
And know to well those who did not, and I will NOT dishonor my wife, nor my best friend I've ever had.
So if there are women, who wonder what a decent man wants in a wife?
Honor this earth and show men, you want her PROTECTED, rather than abused.

But in the face of abuse, just walking through a valley as a human knows abuse, DESTROYS her spirit.
This is how I can tell if modern man has been to a place. Because she is gone.
That ancient spirit, more than just the earth itself, is being destroyed.
I carry that spirit within me.
As a father would protect a child, from those who would abuse it.

Humans are not animals... I hear this from my own kind.
This is not what I see from the outside looking at humanity.
Wolf sees that the embryo of almost all life on earth, has something in common.
It resembles the human being.
We, are natures INTENDED destination of evolution,
DESTINATION, yes, but that meant we NEEDED the others FIRST.
And we are wiping them out, because we call our selves "special" as if ABOVE all other life on earth.

No less is this planet, and most of life here.
AWARE of the TRUTH.
If we cannot understand other animals here,
Maybe there is a 'reason'?
Because I can!

And perhaps it is why, I and this eagle see eye to eye.
Its not what "I" know, so much as what it is clear, we BOTH know. 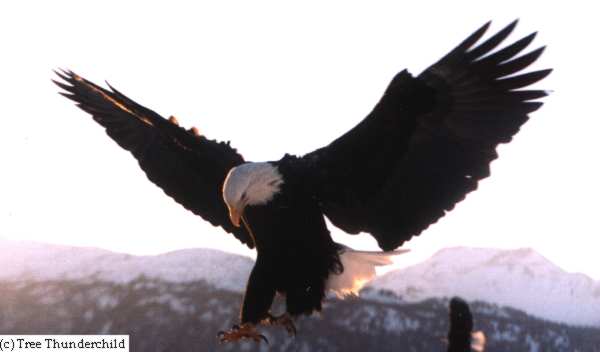 I treat my wife with love, compassion, dignity, respect, and as an equal life as am I.
I am head of household, I make the rules, those are my rules.
I am not female, nor is she male, I LIKE this DIFFERENCE.
Are we equal? As in being alive, yes. As in being human, yes.
Is she a man? I hope not!

But I stand by her, I protect her, I am here to serve her in my ways as she is here to serve me in hers.
And both are respected for each others roles, that combined we become whole, and stronger than separately.
The union, is stronger than the separate parts.
Their is a trilogy.
HER, I, and US.
My focus remains that way. If I focus to much on US, the part that is I, becomes weakened.
I need to be strong in who I am, help her to be strong in who she is, and hold the two of us together in my fair share.
and we support each other, give shelter to each other from the hardships of life.

Or would you instruct a man, to be in the habit of abusing, what is defenseless?
And tell themselves in habit, that doing that, is okay.....
And then wonder at abuse, of women, children, earth, wars, and more.

Asked what I saw stopping peace from ruling our selves and thus the earth,
that above, is my answer.
As an animal looking from dense forests looks at a city.
and seeks to understand humans.
WHY are they doing this?
Does not the above, answer that question?
I'm open to response,
I am open to learn,
and I reserve the right to be wrong.
that I may change, if I learn better.

A friend in peace,
Tree Thunderchild.