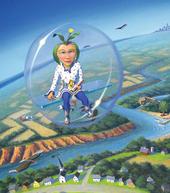 More
all problems return to fear

More about me
writer, songwriter, sculptor...intuitive...mother...grandmother
I wrote a novel for the kids (the kids in all of us)...the book's villain is fear - it metamorphoses into whatever each of us fears the most.
I'm concerned for the planet we leave behind and concerned for the lessons in interpersonal and interspecies relationships we leave.

2 New 5 Star Reviews for the Professor

A MAGICAL JOURNEY DESTINED TO BECOME A CLASSIC
By Malcolm R. Campbell, May 9, 2009

"It was the first day of spring, and it was Saturday. Zak didn't have to go to school. From his bedroom window he could see two robins poking at the wet spring grass. The trees were beginning to bud and he couldn't get dressed fast enough! This was the perfect day to head down to the river and go fishing."

So begins a fishing trip for Zak, his friend Ivy, and his dog Ziggy that becomes a journey around the world and into deep space in L. B. B. Ward's extraordinary middle readers novel "Professor Angelicus Visits The Big Blue Ball." The plan of the day changes when Professor Angelicus arrives in a large bubble from the planet Quantia in search of pure water.

When Zak says there's plenty of water in the river, the professor asks, "Do you children call that river clean?" Zak responds, "Well, it's cleaner than it was."

But the professor's pipe, from which he blows bubbles that can whisk a person anywhere in the universe, requires pure water. And so the quest begins. Even though Zak promised his mother he'd be home for dinner at 6 p.m., he and Ivy and Ziggy fly around the world with a lot of help from birds, fish, and other "Sharelings" on a quest as vital as a quest for the Holy Grail. Without the kind of water the earth was once known for throughout the universe, the professor's pipe cannot create a bubble powerful enough to take him all the way home in time for a Rainbow Festival that's held only once every billion years.

This book works well on multiple levels. The story itself sparkles with life and mystery and dangerous moments. Middle readers will enjoy reading this book just for the adventure. Parents will find in Ward's work, a wonderful read-aloud story for their children (starting at age three) at bedtime.

The magic of Professor Angelicus' bubble ship allows Zak and Ivy to understand the speech of animals who welcome the travelers into their habitats. In the process, two everyday kids (along with the book's young readers) learn what the dog already knows, that these habitats and the creatures who call them home are inextricably linked together and that humans, the Earth's "Guardian Residents," have let things slip in the blue ball's cleanliness department. Those who want to work together to clean it up are called "Sharelings."

There's a gentle but clear environmental message in this book that lives and breathes dynamically within the storyline. Ward's prose flows like sweet water from a deep well, creating an exciting and memorable story. This is a book that you and your children will read many times. It will be shared with friends and their friends and then the dust jacket will be lost, the cover will get dirty, and some of the pages will become frayed--just like the other classics on the household's shelf of treasures.


A WONDERFULLY IMAGINATIVE AND SPIRITUAL JOURNEY TO THE LAND OF SPARKLE
By Helena Harper, April 19, 2009

The idea behind this story - that everything is dependent on everything else - needs to be written about more, in my opinion, and author L.B.B. Ward has tackled this with imagination and sensitivity. Professor Angelicus, himself, symbolises the interconnectedness of all things by being a mixture of person and plant - his leaf-like ears and flower-like antenna serving as an early warning system when something isn't right. He teaches Zak and Ivy, the two children he meets when he lands on Earth (the Big Blue Ball), that sharing what one has with others is the way to live a happy and balanced life. Everything is a Shareling (a lovely word!) - people, plants, animals, water, air, the planet itself. Professor Angelicus says of his planet, Quantia (or the Land of Sparkle),

"We share our food and water, our feelings and love. We share everything. We share the space on our planet equally. We're all friends on Quantia and we all speak the same language. The animals talk, the trees, the flowers...even the rivers sing...In harmony, of course. You become a Shareling by doing what you can do best."

On their journey to find pure water to fuel the Professor's bubble spaceship back home, the children and Angelicus are helped by all kind of animal sharelings e.g. Monique, the French butterfly; Seetasha, the whale, and President of the Underwater Confederation; and Prime Minister Popadopadon, a huge three-eyed, dinosaur-like creature, who is 70 million years old and is cousin to the Loch Ness Monster. Besides having three differently coloured eyes to see the past, present and future, he also has a body coloured every shade of green and blue and has a white belly with red and orange polka dots - how, I would have loved to have seen a picture of him, when I read that! When the travellers' fears overwhelm them, the evil Borrell appears - a monster that can take any form - and Zak and Ivy learn that the only way to defeat him is to think positive thoughts. Eventually, they find the pure water they've been seeking and they all travel to Quantia to see the Rainbow Festival, using one of the starpaths that criss-cross the universe.

The description of the Rainbow Festival and the Grand Council at Great Spirit Mountain is probably my favourite part of the book, as the author describes beautifully and imaginatively a world of wonderful joy, sharing and harmony, where all things are possible, but there are marvellous words of wisdom peppered throughout the book, such as when the Professor is talking to Popadopadon in the Palace of Memories: "Things have gotten out of alignment here. Hate makes more hate. Only love can make love. If the Guardian Residents balanced their body, mind and spirit, the Big Blue Ball would be better balanced."

And when seeing all the rubbish dumped in the ocean, Angelicus says about humans, "Why do they do that?...What do they think the water can do with their garbage?"

There are some quite challenging spiritual themes to the book and what readers gain from it will depend on their age, but the book deserves to be read by young and old alike, as it will open their eyes to a different way of looking at and living on this wonderful living, breathing Big Blue Ball of ours before, hopefully, it's too late.

Beyond the Big Blue Ball Chapter6

"It's nothing like my globe at home," remarked Zak, "I can't see the borders of the countries. They aren't different colors or anything."
"Borders? Borders?" The Professor looked bewildered. He thought for a minute then pulled the planetary guide from his belt. He turned rapidly through the pages then stopped and said, "Aha. Here we are. 'Borders: Imaginary lines (sometimes following the natural shape of a planet) established by some early warlike Guardian Residents to separate individual… Continue

Beyond the Big Blue Ball Chapter 6

"Stars? We're made of stars? Is Ziggy?" Ivy was star struck.

"Are you made of stars, Professor Angelicus?" asked Zak. "Is Quantia?"

"Absolutely. Nothing more and nothing less," the professor affirmed. "The iron in your blood, the calcium in your bones...everything. Even the tiniest drop of water shining on a spider's web is stardust and starlight. All living things are related. We're all brothers and sisters."

He pointed out toward the silent brilliance in… Continue

Best wishes to you both...

The expression
of the beautiful genius
opens like a wordless
rose
and clothes us
in the fumes
of paradise.
Somehow
when we are
listening to the wings
of crows and the
tender melodies
of elfin butterflies
we feel embraced
by the breath
of angels.
Beating
so softly, so
delicate-sweet that
velvet on a virgin’s
skin
might touch us
with an offering.
Though
we are there, out
in that other place
the familiar cup
of a summer’s rose
rises
from this ground
to kiss us
with the miracle
of its pouring passions.
And
we are downed
supine
into the common
haunting symbolum
of earth’s
dense mystery.
Though
not a single
word has swollen
to the lips
like a cherry
freshly swollen,
but the heavy
buzzing
of a working bee
lost
in the ecstasies
of pollen.
And
we are spellbound
and complete.
Like fruit.
Like garden.

Anahata Love said…
Aloha, sending prayers to Jan and you to ease your minds and hearts during these challenging times. If you can find time to check out Project Camelot's interview with James of Wingmaker's (it is in text form) it may also help to ease your minds. We have no idea of how powerful we are. 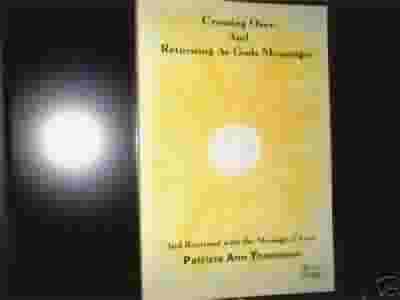 Thank you very much for the invite & for your friendship. Patricia Ann Thompson/Author

Have a Nice week!
Best regards from
Maria

Thanks for your friendship, lovely page,music and writings..will return to read more when have time. Peace ~N~Love Sister xx

the Story Of Stuff . com

Stuart Thomas said…
Thank you, Linda, for becoming a friend.

All the best to you,
Stuart