PeaceJam has built a brand new website which is combining www.globalcalltoaction.org with www.peacejam.org and implementing a total overhaul of how things work to provide you with a completely user focused site, which, in plain English, totally pwnz. Seriously, it’s really sweet.

If you have never signed up with PJ before, now is the time to start! If you're actively working towards peace through service projects then come register them… Continue

Listening to the Other published today

First copies of Listening to the Other arrived last night. They look great! Always a surprise seeing a new book for the first time as you never quite know how it will be in the hand as opposed to on screen. This time I have to say I think it looks better than I'd imagined. The cover is a slightly deeper colour and the exercises give an imprssion of accessibility. … 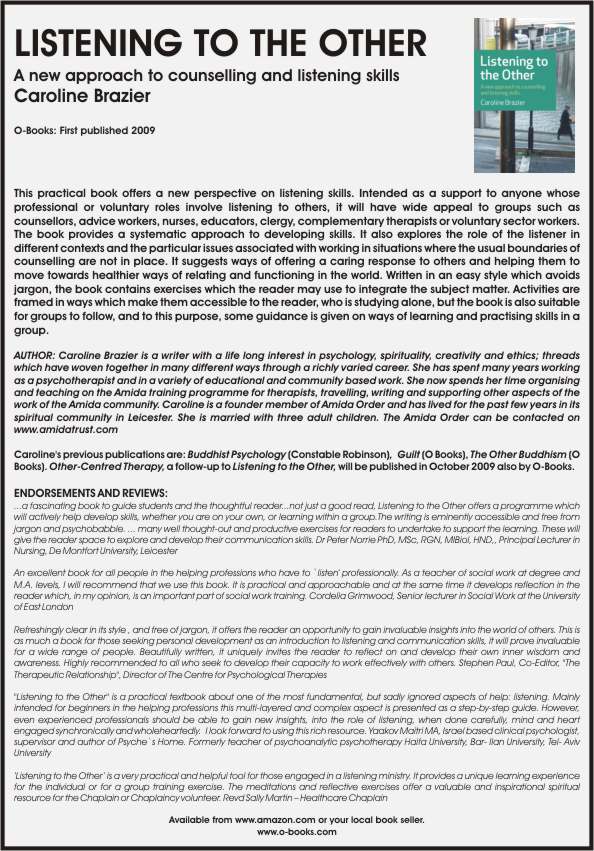 “Feel the pain of others. Understand their strengths and disappointments their hardships and inadequacies and open your heart to them. Realize that everyone is doing the best they possibly can. Judge no one. But rather, cradle all humanity in your heart.”

One of the most important things I have practiced in my life is Compassion. Compassion for every person I meet, from a street person begging for money to a wealthy… Continue

There have been peace rallyes all over the world for decades, but so far all of them had been locally restricted to a certain geographical region and / or for a specific ethnical or religious issue in question....

But what is the name of the most popular and unique GLOBAL peace rallye in the world with 1.000.000 members in only 5 years?
Here is the "Who-wants-to-be-a-Millionaire?" final question... ;-))

"Nonviolence means avoiding not only external physical violence but also internal violence of spirit. You not only refuse to shoot a man, but you refuse to hate him."

FIERCE LIGHT HELD OVER AND EXPANDING!

Congratulations – we did it!!! Fierce Light is held over in Vancouver and Montreal, and expands to two screens in Toronto Friday! Thanks to all of you who've played a part in Fierce Light having an outstanding first weekend!

Now we need to build momentum, and prove to the cynics out there that a film about hope, compassion, and possibility is needed in this time of crisis. Let's crash the gates of the gatekeepers!

IT'S OK TO BE SAD SOMETIMES Ok as most of you know me I am always pumped up, full of energy and on cloud nine the majority of the time. I love to embrace life with the most positive and amazing attitude and embrace everything to its full potential and experience. However; sometimes I get sad, real sad and I want all of you to know that it is ok to be sad sometimes.
Sadness is just another feeling. A feeling that we should embrace, let in, feel, analyze and then… Continue

The timing is good, as we are still hoping to finalise investment in the US release. Watch this space!

Music and Spiritual Practice - An Overview of Poligraf (part 1)

The adventure began during the second of my four years of studying electrical engineering at Université Laval in Québec City. Through various friends and contacts I reconnected with progressive rock, a form of music to which I had already been exposed to in my youth thanks to my older brothers and sisters. Hearing the music of bands such as Yes, Rush, Genesis, and King… Continue

From the Director of Scared Sacred & The Producer of The Corporation

IN THEATRES ACROSS CANADA MAY… Continue

ICA Films is proud to announce the acquisition of UK Theatrical and DVD rights for Anthony Fabian’s award-winning drama SKIN, starring Sophie Okenodo, Sam Neill and Alice Krige. The film, based on the true story of Sandra Laing, premiered at the 2008 Toronto International Film Festival and has gone on to win numerous international awards (see below). Date for UK theatrical release will be 24 July 2009 with a DVD release which will include several extra features slated for later in the… Continue

Be Love like all great visions, began and functions in accordance with destiny. Co founders and life partners KamGi Chak and Kyle Finch met because the wind of Spirit blew us together. We created Be Love because we see nonviolence as Love, the highest Truth, and we are committed to supporting education and action that is aligned with the great teachings of nonviolence. The Be Love apparel brand (gorgeous eco/organic t-shirts) is the powerful vehicle designed to sustain our… Continue

To heal from the inside out is the key. ~Wynonna Judd

I have spent the past few days not feeling well. When I woke up this morning the feeling persisted. It got me thinking about healing and what it means to get sick. According to Louise Hay, every physical illness we manifest is linked to a mental or emotional condition in which we are limiting ourselves or holding ourselves back. I think there is a lot of truth to her philosophy.

Our healing starts from within.… Continue

On Sunday, May 24th, I will be back on the radio for three hours with great music (and a great message).
The station is WFIT FM and may be heard 24 hours a day on the internet.
The time will be 10:00 am eastern time.
I had a show for many years each Sunday called Private Radio and it will be good to get back in the studio for these three hours. Sould any of you listen I am The Sandman on air.......................
hope you will join me for some great music, a message of… Continue

If we let go of what our plans are, we allow what is. ~ Pilar Stella

This quote came to me this morning when I woke up. So many of us plan our lives away. I know I have always been a planner - until recently (and I still do it, but less and less). That is, I am beginning to truly allow what is and honor what the universe presents to me more and more every day. It is quite an amazing, and different, way for me to live.

Yet, I am finding more of the magic and mystery… Continue