The Enemy is the State!

Obama Has a Heart!!!

PROTECTION OF CIVILIANS FROM N.A.T.O. AND U.S.A. ARMY ATTACKS

THE U.N. ,POLITICIANS , HUMAN RIGHTS ORGANIZATIONS AND THE MEDIA SHOULD DEMAND FROM
N.A.T.O. AND U.S.A. ARMY TO STOP KILLING CIVILIANS
AND BRING TO JUSTICE THOSE RESPONSIBLE FOR WHAT HAS HAPPENNED SO FAR

CIVILIAN CASUALTIES ARE ESTIMATED BEFORE AN ATTACK


Thank you to Breeze and yig… Continue

Ipeacers, would you like to join OneWebDay stories contest?

I think www.ipeace.me (being its creators or participants) is an outstanding example of a positive experience on the Web. I was wondering if you guys would you like to join OneWebDay stories contest. Please see more about OneWebDay below.

"OneWebDay (http://www.onewebday.org/stories) Stories blog is already available to receive entries. This year apart from inviting Bloggers from around the world to… Continue

The story of the two Bushes is not a new theme, and has been chronicled and analysed by Astrologers over the years. With troops being recalled from Iraq, it seems that the karmic cycle which began when the North Node left Aquarius and entered Capricorn at the time of the First Gulf War (late 1990, early 1991) has come full circle round the zodiac. The three main characters of this karmic tale are the archetypal villain Saddam Hussein, the elder President George H. Bush, and his son George W.… Continue

The North Node, which represents the karmic tone of the period, now stands at O degrees Aquarius in the process of moving into Capricorn, as it moves backwards. It spends approximately a year and a half in each sign, and the shift is due to take place over the next two months. The Mean North Node enters Capricorn on Sunday 26 July, and the True North Node on Friday 21 August. If you have planets or angles (such as your Ascendant) at O degrees of a sign, there is likely to be a significant… Continue

Declaration of Independence from Violence 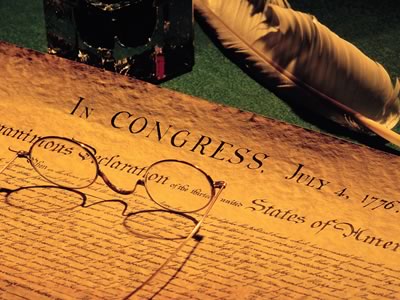 On this day in 1776, our country's forefathers declared independence from the tyranny of the British monarchy and launched this shining example of democracy. However, somewhere along the way, the right to "life, liberty and the pursuit of happiness" has morphed into a society based on violence and a winner-take-all mentality. The history of our democracy is filled with one tragic period of war followed by another, with all-to-brief interludes to reload. When school children are taught… Continue

We Must remeber our crimes :: History can teach us what not to do!

The Meaning of the 4th of July to the American Father Posted on July 2nd, 2007 by Glenn Sacks in All News, Society and Culture, US News, Read 1,261 times

.“What, to the American slave, is your 4th of July? I answer; a day that reveals to him, more than all other days in the year, the gross injustice and cruelty to which he is the constant victim. To him, your celebration is a sham; your boasted liberty, an unholy license; your national greatness, swelling vanity; your sounds of… Continue

A great artist that never had a chance to a childhood. An abused child who tried all his life to please his father in front of whom he was never good enough. His father called him “big nose” all his childhood and unconsciously he all his life tried to get a better “nose” with all the consequences it had.

We can cry for a super artist, entertainer, and musician that has left us. I cry for that child that never had a chance to be a… Continue

Hi my friends...Too lissen and peace in you heart can takes time.But dont give up.If you really want shane and feel harmony//peace in you heart.Learn too lissen at you body.I can tell thats take years for me too fine my self.And I learn moore for every day.Then you can chare of youre innsperation too Good life,and happines//lissen too heart.Peaceful.Be then you really are. Love Katarina

This is my newest Peace Artwork!

With summer in mind my hand went on a journey drawing a picture of a ship sailing for peace. This artwork is entitled, "Maiden Peace" and the original artwork is a pen & ink drawing.…

WAr and the 4th of Jully

The St Petersburg times, July 3th 2009, headline read “New front in Afghan war.” I was blessed to be sitting in my air conditioned apartment In Gulfport Florida sipping coffee, as I read the newspaper. I did not see the Newspaper headlines on Feb. 5th 1971; I was part of a “New front in the Vietnam War.”
There are just as many similarities as differences in both of these war stories. War fronts far away with our Army chasing an invisible ghost of an enemy, through the mountains along the… Continue

Being all that Is

It will be nothing

Nor will it be

Fall from the sky

Nor will it be God

Or his brother the Devil

You’ll get what you deserve


You can break many mirrors

Shake your head in disbelief