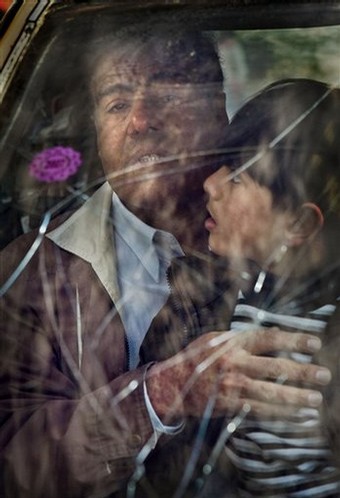 Today, the IDF published the results of its inquiry into the incident. The IDF admitted that 3 of Dr. Abu al-Aish daughters were killed by 2 tank shells that were shot by mistake into their apartment. This represents a closure of sorts for the doctor who's been adamantly claiming that no arms or armed men were operating or hidden in his home.

I think that we in iPeace can learn a great deal from the good doctor.


Dr. Ezzeldeen Abu al-Aish, who lost three daughters and a niece in an Israel Defense Forces strike in the Gaza Strip last month, responded Wednesday to an IDF statement confirming that it was Israeli fire that killed his daughters, thanking those responsible for investigating the incident and saying that "we all make mistakes, and we don't repeat them."

Abu al-Aish, a father of eight, became one of the symbols of the Gaza offensive for Israelis after he captivated TV viewers with a sobbing live report on the death of his three daughters and his niece in Israeli shelling. The 55-year-old gynecologist trained in Israeli hospitals and speaks Hebrew.

The IDF announced earlier Wednesday that an investigation into the January 16 incident confirmed that it had been Israeli fire that killed the four girls.


"First of all, I would like to thank all those who worked, and had the courage and good conscience to shed light on the truth that I always believed. Thank you to everyone who took upon themselves to publicize this truth seeking investigation," Abu al-Aish said in an interview with Channel 2.

Abu al-Aish did not neglect to thank the Israelis who met with him and offered him strength, saying "the love that I've received, from people I knew and people I didn't know, gave me strength."

The IDF released the conclusions of its investigation into the incident earlier Wednesday, explaining that Golani troops had been fired upon by snipers situated in the house adjacent to Abu al-Aish's home. The troops identified suspicious figures in the upper levels of the doctor's building, and deduced that they were serving as observers, directing the sniper fire from their vantage point.

Following long deliberations and assessments of the situation, the Golani commander decided to fire tank shells at the building, and when the soldiers heard the screams and realized civilians had been hit, they helped evacuate them, the investigation revealed.

The army argues further that the residents of the neighborhood were urged to evacuate the area prior to the attack via thousands of leaflets that were disseminated in the area, and that the doctor was personally asked by phone to evacuate his family from the neighborhood due to the fighting.

Abu al-Aish denied that there were any militants in the building at the time of the shelling.

The IDF spokesman's office issued a statement extending the IDF's condolences over the incident, but maintaining that the IDF operated within reason in light of the sniper fire directed at the troops and the heavy fighting in the region.

Comment by Chris Walters on February 8, 2009 at 5:07pm
I sent a prayer when I first heard about this on the news. I admire anyone who can chose Love, Light & peace. My thoughts are still going out to everyone there
Chris
ps Would that the politians could think the same way as us.

Comment by Rev Isabelle Stone on February 6, 2009 at 10:13pm
May you, Abu al-Aish, be blessed by your choice to walk in the light. May many others take the power of your decision to heart and choose likewise. God's blessings upon you.

Comment by Greg Alario on February 5, 2009 at 4:33pm
This is the way of the Dalai Lama, Gandhi, Yogananda, Morihei Ueshiba, Christ, Martin Luther King and all the other beautiful ones. It is one thing to talk the talk and intellectualize spirituality and humantiarianism, it is the real deal when faced with this kind of personal pain and have the base of true love that allows you to walk the walk. I feel the pain of Dr. Ezzeldeen Abu al-Aish and I applaud his effort in bringing such a powerful message and midset of peace.

Comment by John Paul Loucky on February 5, 2009 at 4:00pm
May I recommend the book Blood Brothers, by Chacour, a Palestinian Christian. lst Palestinian to earn a degree from Hebrew U in Jerusalem, he has built many schools, libraries, community centers and youth clubs throughout Israel to aid his people by peaceful means. The Light of truth does indeed set us free from lies. In Him was life and that life became the light of men and of nations. Like this father has said, it is indeed up to us whether we choose to walk in light or darkness, motivated by forgiveness or revenge. Our prayers are with him!
www.CALL4ALL.us (JPLoucky)

Comment by Eric Hiss on February 5, 2009 at 9:44am
I think we can all agree that without truth, respect for human life and the rule of International Law, ultimately there will be no peace and the sacrifice and courage of people like Abu al-Aish will be in vain. even he said "we all makes mistakes. And we don't repeat them."

Regarding C. Pavans comments, there is ample and clear evidence, most notably from statements by Israel's IDF (army) themselves (see link below) they did strike the perimeter of the school. over 40 women, children, civilians died within a few meters of the compound that day. is that something that should absolve the Israeli army? Does that somehow make these and well over 1200 other deaths ok? Half-truths will not bring peace to the Middle East, nor will lighting candles and wishing the best for this fine gentleman while the majority of his fellow Gazans live on one meal a day living in an open-air prison. A full accounting of transgressions on BOTH sides is what is needed for true and lasting peace.

blog post on the incident from the very respected human rights organization Human Rights Watch. If you are interested in the facts, it provides an insightful read:
http://www.hrw.org/en/news/2009/01/07/gaza-israeli-attack-school-needs-full-un-investigation

Comment by 1powder on February 5, 2009 at 3:41am
I have suffered as of late from a wife that has fallen out of my life. My suffering is nothing compared to yours. I commend you at following light, peace and hope. These are things that every human should follow and show help towards those suffering. In a perfect world why would we not give to our neighbor to make them equal to what we have or vice versa? So much suffering, let us all love!! I think that would be god's true words...

Comment by susan oppenheim on February 5, 2009 at 2:51am
The Toronto star ran a this tragic item in a full front page story last Sunday .It was emotional and charged very highly with a lot of anger.I knew about the doctor from ipeace so i was sorry to see how the paper handled it.There followed at least 150 comments.Many very very hostile to both sides.I am so pleased to see this positive and gracious closure for me David on this story.The Dr. is welcome here at the University of toronto as he had planned as it would be an honour for my city to have such a family present in these times of madness.
Blessings and loight.

Comment by dinah mellin on February 5, 2009 at 2:31am
thank you for posting this story abut eh doctor who lost his 3 daughters and niece in t eh Gaza missile shooting..
I'm so sorry for the awful losses in that most recent war.

I pray that the use of force and the killing will stop. and that other forms of dispute and communication can be learned instead.. There must be an answer in Israel and The Gaza. There has got to be an answer to the question of how can these two sides work out their border problems...
thanks