Diwali on the Square 2009
Sunday, 4th October,
2 pm till 7 pm
Trafalgar Square, London.
FREE
Programme
2.00-3.15pm Celebrations begin with traditional circular Garba dancing in the centre of Trafalgar Square with live entertainment from one of the most dynamic and exciting Asian bands in the U.K, Shama and Friends.
3.45-4.15pm Opening ceremony with special Diwali messages.
4.15-5.45pm Experience a spectacular stage show with some of London’s best talent. From Devdas to Latin and contemporary Bollywood hits, mind blowing Dhol beats and classical, urban and street dance.


Hindus observe Diwali over a period of five days. The first day of Diwali, called Dhanvantari Trayodasi sees the Hindu families offering prayers to the Goddess of wealth (Lakshmi) to remember wealth is considered a benediction from God.


The second day, called Narak Chaturdasi is associated with the defeat of the demon king Narakasura by Lord Krishna, who freed 16,000 captive women. This day reminds us not to abuse our power and to channel our strength for the greater benefit of mankind.


The third day is actually Diwali. According to the Ramayana, the people of Ayodhya illuminated the kingdom with earthen lamps (diyas) to celebrate the return of their king, Lord Rama after he defeated the demon king Ravana who captured his wife Sita.


The fourth day is the Govardhana Puja (Hindu New Year), and is a time for reconciliation and forgiveness. On this day, Hindus offer thanksgiving to cows and worship Lord Krishna with offerings of food arranged in the form of Govardhana, a hill in Vrindavana.

The fifth day of Diwali is called Bhaiya Duj and is dedicated to the relationship between a brother and a sister. It is a day when every brother takes time to visit the home of his sister and her family. The Sikh Festival of Diwali

Sikhs celebrate Diwali to express their joy at the return of the sixth Guru, Guru Har Gobind Ji to Amritsar in 1620. Emperor Jahangir had imprisoned him along with 52 Hindu kings. The Guru was granted freedom but refused to leave until the kings were also released. To commemorate his determination and undying love for Sikhism, people lit the way to the Golden Temple in his honour. 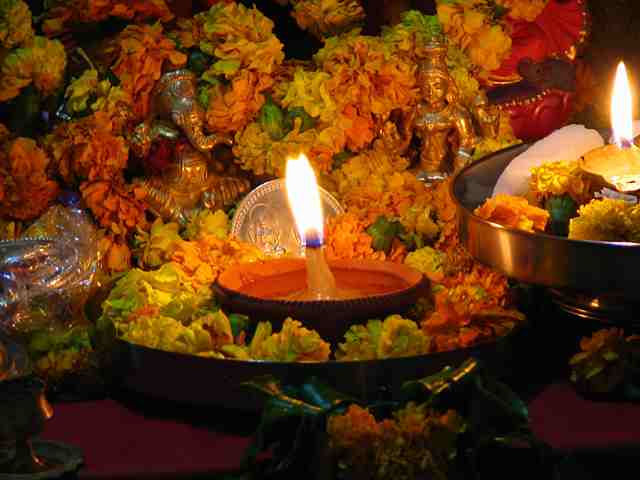 The Jain Festival of Diwali

The Jains celebrate Diwali as a festival of light, a symbolic representation of the knowledge that was given by Lord Mahavira for the peace and welfare of all living beings. It marks the anniversary of the attainment of moksha by Mahavira in 527 BCE and achievement of omniscience by his chief disciple, Gautam Indrabhuti.