As I sit here at my desk thinking about the “old me”, or in other words the “me” before I discovered that I was literally in my own way - by in my own way I mean I was the only one ever standing in the way of my life’s purpose or Dharma.

Every time I was asked what I wanted to do, I was ridden with total anxiety and fear. I had extremely low self esteem and was dealing with a deep depression. I thought that where I came from or my past limited my future potential or made me unworthy of being “successful”. I didn’t deserve anything more then what I already had! “I didn’t belong in this society”, or so I was told.

I was a Victim!

A victim of sexual, physical and mental abuse, a child who grew up believing that because I didn’t fit in, or as a friend of mine Jennifer Hough, of The Vital You , calls it “A Member of the Not Belonging Club” I felt that my opportunities in life were limited ,that my past predicted my future. Who’s going to hire a gay guy that came from a poor family with all of this baggage?

Are you standing in your own way? Do you frequently make excuses about why you can’t do things?

Do any of these excuses sound familiar?

Is your mind overwhelmed with excuses, limitations and pains from the past?

If you move all of those excuses out of the way then what is stopping you from achieving and becoming everything in life you ever wanted?

Dan Caro was born in Metairie, La. on November Sixteenth, 1979.
At the age of two, an unthinkable event would change his life forever. While in the family garage, the pilot light of a hot water heater ignited gasoline fumes and Dan sustained third degree burns to over seventy percent of his body. After being rescued by local firefighters, he was rushed to New Orleans Charity Hospital where he underwent emergency surgery. While in ICU, a Shriner from the Jerusalem Temple in New Orleans, La. contacted Dan’s parents and told them about the Shriners Hospitals for Children. Immediately, Dan was transported by medivac to the Shriners Burns Hospital in Boston, Ma. where he would undergo many reconstructive surgeries and other treatments throughout his childhood.
Ultimately, as a result of the burn injuries, Dan lost his right hand, most of his left hand and is severely scarred. In the mid 1980s, reconstructive surgery that would give Dan the use of a moveable thumb was performed on his left hand. Since then, Dan has been living life to the fullest in the face of his adversity. His relentless
attitude and resiliency would consistently prove that nothing is impossible; including his lifelong dream of becoming a musician.
Dan, at the age of twelve, began drumming in spite of his loss of fingers. He plays by using the left thumb to grip one drum stick, with the other drum stick attached to his right wrist by a wrist band and rubber bands. With this simple device and an undying passion for music, Dan has become a very respected drummer in the New Orleans area. His unique personal style and musicianship has
landed him countless gigs with some of the world’s greatest performers such as Ashish Khan, Michael Ray, Walter “Wolfman” Washington, Karl Denson, Marshall Allen and Jacob Fred Jazz Odyssey.
In addition to music, Dan is an Ambassador for the Shriners of North America. He is a professional speaker who shares stories of fulfillment and achievement; A prime example of bravery and courage.
All Healing Starts With You My Friend and Comes from Within!

You Hold the Keys To Your Life!

Comment by Julie Veronica Smith on April 22, 2009 at 9:29pm
Indeed, none of us have far to look to see someone who has a far greater challenge to overcome. There is a vast river of denial that lies between victim and victor of circumstance. A very inspiring faith building piece. Thank you for sharing it. 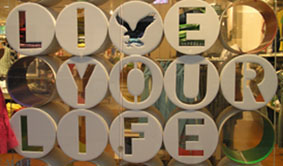 HEY! love your positive attitude, and the title to this post! Good for YOU!! I am surprised that you have no comments yet, and that I am the first.
This kind of energy attracts me -- and I am all for your message! GOOD GOING!!!!