There is a story about the samurai, Miyamoto Musashi, who once went to a sword polisher's shop to have his blade honed and brightened. At the front of the small business he saw a sign that read, "Souls of the samurai polished here." (It is well known that the sword was considered the soul of a samurai in the culture of the time.)
So Musashi entered. "Hello." He called.
"welcome." said the old proprietor.
"I would like to have this sharpened." Musashi said, handing over his sword.
The old man respectfully bowed, examined the blade and asked, "Do you want it really sharp, or just sharp enough?"
"The sharper the better."
The old man frowned then. "Sharper than this?" He re-sheathed the sword, handed it back, and said, "I must decline."
Musashi was both surprised and not a little offended. "Is my sword unworthy of your efforts then?"
"No. Its a superior blade. I just can't stomach honing the blade of a killer. A man who kills and thinks its any great achievement is misguided to say the least.What did my sign say out there? I 'polish the soul of the samurai.' didn't say anything about sharpening things..."

Musashi became even more surprised. Then he became thoughtful.

The old man's wife came out quickly to apologize, but was surprised to hear Musashi say, "No. your husband taught me a good lesson today." He then bowed deeply and asked, "Will you polish my soul?"

The old man smiled, slapped his thigh, and said, "I would be honored to do my best for such a fine blade whose owner is a man of such great character. I only hope I can do it justice. I would much rather my master in Kyoto were here to do it for you." Thus began a friendship between Musashi and the old sword polishing master.

I have recently begun to make these kinds of swords in the old way. Forging and quenching the raw steel until it literally is born into a blade that has taken on a 'life' of its own. During the course of this, one realizes that its an intensely spiritual pursuit. Its a form of alchemy. water, air, earth and fire come together, along with the spirit of the maker to produce something of beauty, that....at its core, is a thing which kills. But at its higher level becomes a thing which refines the spirit.

Through this process I've come to see that our entire journey through life is a form of refinement, as we evolve from birth to our last breath. Its all a question of how much we want to push it. I can say with all certainty that making a blade of this type demands that one pushes it to the extreme. And....it never ends. One can make a beautiful blade, and when the last stroke of the honing stone is made, he will be hungry to get on to the next sword, which will gain benefit from all the mistakes of the last efforts. Its the process...never the object that seems to really matter.

People have a view of the samurai as bloodthirsty fanatics who kill at the drop of a hat. Nothing could be further from the truth. I want to explore the artistic and spiritual end of it to illustrate the reality of who they were. 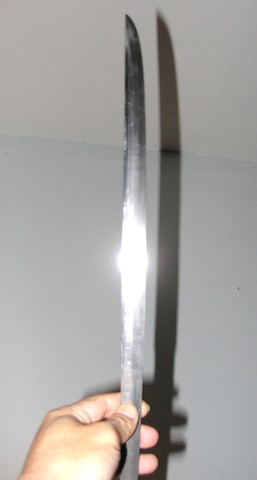 In the old days steel was obtained by smelting all kinds of materials provided by nature. The vikings burned peat moss. In the US they burn mineral rich dirt. In japan, they would burn sand from specific areas. Thus we have the earth component.

Air is needed to raise the temperature of the forge. Bellows are used to achieve this. Yes, it is monotonous, but if you approach it from a spiritual angle, it becomes a very meditative experience. it also has a very Zen component in that one must be keenly aware of the state of the steel as it is being heated. One has to be in the moment. Completely present.

Water is used to quench the blade in the most dramatic moment. The moment when the steel actually takes on the characteristics of, and becomes a samurai sword. it is also used to blast off the fire scale that develops from the extreme temperatures.

Fire is the purifier. It literally lights up the steel, and so 'enlightens' the deepest core of the metal. it makes the steel malleable and allows it to take on a shape without being too rigid. Rigidity forms cracks that ultimately destroy the blade. At its moment of most thorough 'enlightenment,' the blade is quenched.

Joseph Campbell's hero's journey comes to mind here. because the hero in his story must face a crisis. If he survives this, he comes out on the other side transformed. Purified. 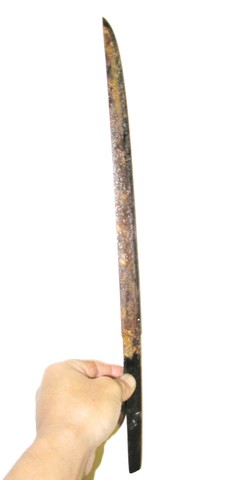 Transformed. Born as a wakizashi.

Forging also affords one the chance to make other things that, if viewed from a certain perspective, allow for a further evolution towards what ultimately becomes serenity and refinement. There are many paths...Kung Fu, Aikido, Kendo, Karate, tea ceremony, painting...

Thing of it is, I've been watching a bunch of old school ninjutsu films of late, and have realized that these folks, the ninja, must have been incredibly serene and composed. To move silently and perform a task when one is up against at least a dozen sentries, knowing that any alarm will bring scores of trained men with swords drawn...Yeah these guys had incredible composure. The consequence of being caught was torture and crucifixion or any other lingering agonizing death that his foes could think up. So i decided I wanted to learn about one small aspect of their art. Shuriken jutsu. Most of us are familiar with the ninja stars, but the bo-shuriken was also very common. The throwing spike.

Its not easy to grasp by a long shot. The grip must be just so. The stance, the angle of attack, and most importantly, the mind must be correct. Coordinating the mind with the act of throwing demands complete presence and instantaneous split second timing. If anything is off, you miss, or the spike doesn't hit right and bounces off.

Now think of executing all this as one is being attacked by men with swords drawn, and you can see how important composure was for these men and women. A great example of this kind of budo honed serenity can be seen in Miyamoto Musashi's paintings. 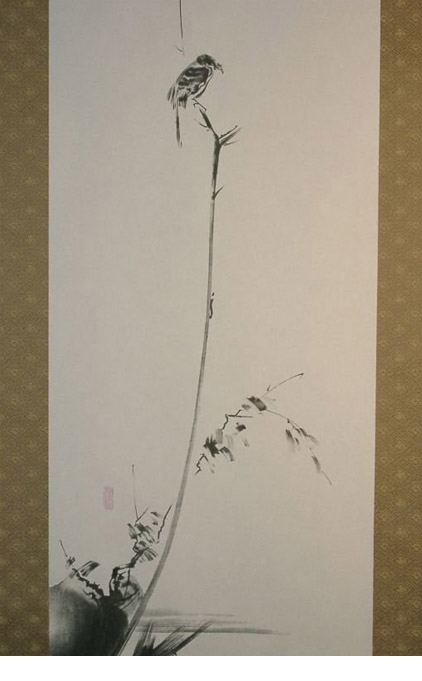 Musashi fought over sixty life or death duels, yet he had developed the serenity of spirit to produce this painting, which is shown in museums around the world as a high example of Zen artistry. A beautiful short video that perfectly illustrates the complete presence in perfect form. Zanshin.

Comment by Mitsuyoshi Mark on April 4, 2010 at 6:30am
Also, the nervousness and anxiety over the event is the same. That quench can destroy the blade even if you did everything right. It can shatter. So I was like the nervous dad, and also the midwife, all at once. Its certain that I will shatter a blade some time, but that's all part of the process too. Just gotta take it in stride and keep going.

Comment by Mitsuyoshi Mark on April 4, 2010 at 6:27am
Oh I'm glad I didn't have to experience that kinda pain! But I liken it to birth, because there are so many parallels. If you look at that last picture, its pretty messy and ugly. Now, I know newborns are beautiful, but damn, they're bloody and gooey, and the head needs to regain its shape....you know what I mean...Bill Cosby recounted being in the delivery room and said to his wife something like, "I love you so much. You gave us a...lizard."

Well, the blade has just been through an awful trauma too. Its been curved by the shock of the water, and that brown stuff is from a protective clay coating I applied. Kind of like a placenta. Yeah its the afterbirth. Hahaha!

Comment by Mitsuyoshi Mark on April 2, 2010 at 8:31am
Thanks, Joni. More to come. One learns a lot of things going through this process, and one of them is the idea of commitment. There is no turning back during some parts, and full attention is needed during even the most repetetive and monotonous parts. There are exciting and dramatic parts too, and that's not unlike the birthing process.