REPORT OF A PEACE ACTION PROPOSAL FOR LIBIA

On march 26 I have sent an email in India, to Arya Bushan Bhardwaj , the Founder of Gandhi In Action International….

Dear Arya, I have been following the evolution of the situation in Libia and
felt compelled  to think of something that could be done as Gandhi In Action in
Europe... Shall we protest? and organize some sort of "stop the war"
manifestation? Are there groups and NGOs moving in that direction we can join
and support?... After some search on the web, I came to the conclusion that
protesting and manifesting against the war would be, as usual, useless and
ineffective.. If the concern of the world is for the civilians in Libia, which
are victims and spectators of the conflict between the government of Gheddafi
and his opposition of armed rebels (that rashly expected his surrender, after
Ben Ali and Mubarak), it is not from the European nations, the NATO and USA
leaders to provide for the safety and protection of the innocent people, as
they are just competing to provide for their national interests on natural
resources.... an effective action can only come from the fearless and
nonviolent rainbow people of Europe. Therefore I came to this idea to launch.... 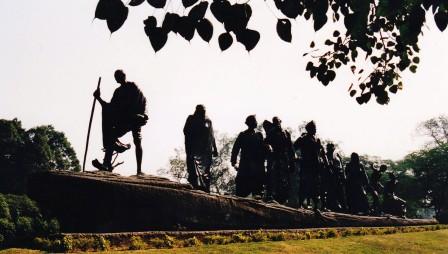 SHANTI NOW IN LIBIA   Peace mission  for a nonviolent solution of the conflict  in  Libia .

A few days after the outbreak of the war, it is evident to all that the violent solutions pursued by the leaders of the European nations involved, including the NATO intervention, is opening the way only to a gradual escalation of hate and destruction, with the potential involvement of all nations of the world, as the so called “humanitarian operations” to protect  the civilians  are, in fact,  motivated by the greed and competition for the natural resources of the area.

We all know that violence feeds violence and the spiral of violence and hostility of this war is expanding fast, manifesting collateral effects that are shaking the consciousness of the citizens of the world.

The time seems appropriate for us, as a network of Associations  devoted to peace and nonviolence, to take action, claiming the right to call the leaders of the armies to cease the fire in the region and explore alternative ways to solve the problem.

The flood of refugees that are reaching Europe at the island of Lampedusa, in Italy, with boats overloaded with  people trying to escape from the war, is creating serious problems to the inhabitants of the small Mediterranean island which are now outnumbered by the asylum seekers  and, at present,  plans to receive and host  these people are still uncertain and undecided.

The idea…. Remember MIR SADA, the march towards Sarayevo organized in 1993 during the Balcan conflict by several NGOs and nonviolent activists?  In this time,  in the same way and with the same principles, mobilizing all the nonviolent activists available, a Shanti Now March towards Tripoli could be organized in few days on the web. Some of the NGOs which have a relationship with the governments of European countries could ask for basic and logistic supplies  together with a political support for this mission, such as…

-          Accept  and pressure the Libia’s government  too for  a  temporary cease fire in the region to allow this nonviolent  people’s peace mission.

-          A free ride of the volonteers  from the harbors and airports  where boats and planes are departing from Italy’s mainland , with destination Lampedusa, to transfer the refugees to the tent camps organized in various military bases in Italy and Europe.

-          To free the seized boats arriving in Lampedusa loaded with the refugees from North Africa coast  and allow them to go back where they come from, loaded with the volonteers. This would represent  a strong message to the people waiting to flee and therefore could prevent  further departures.

The marchers could  gather at a certain location and from there, march towards Tripoli, with the help and participation of local people.

The solution for the Libia civil war should refer to the Gram Swaraj concept, and  apply to the constitution of a Federation of free and independent communities, selfgoverned by direct democracy and a federal parliament  of the representatives of the local communities. It is a proposal that  can easily be understood ad applied  to a political solution for Libia as Gheddafi had already implemented a sort of federation of tribes and provinces…

All people in North Africa that have freed themselves from their dictators could agree towards a North African Federation of Communities and dissolve their national boundaries. It is the same solution we thought for the Balkans in occasion of the “Shanti Now Mission” in 1999, when Gandhi In Action proposed for Jugoslavia to transform into a Federation of communities to bypass the problem of the secession of Cossovo and resolve the conflict.

Gandhi In Action doesn’t have the capacity to organize and manage this initiative, but offers all possible support and participation to the Associations that could make it their own and be the point of reference to organize the expedition. Nonviolent Associations and activists  interested can contact the European Coordinator of Gandhi In Action International  Riccardo Gramegna (+39 329 2298 656   riccardogram@libero.it

Immediately I’ve  got  the answer from Arya B. Bhardwaj….  Dear Riccardo, Excellent, if your inner voice say, please go ahead immediately, my blessings are wirth you, keep in touch with the progress, I am reaching Milan on 15th evening, Arya.

The proposal has been sent to different Peace and Nonviolence Associations in Italy and, up to today’s date,  only few sent a feedback of interest, while protest manifestations have been organized in several Italian cities…