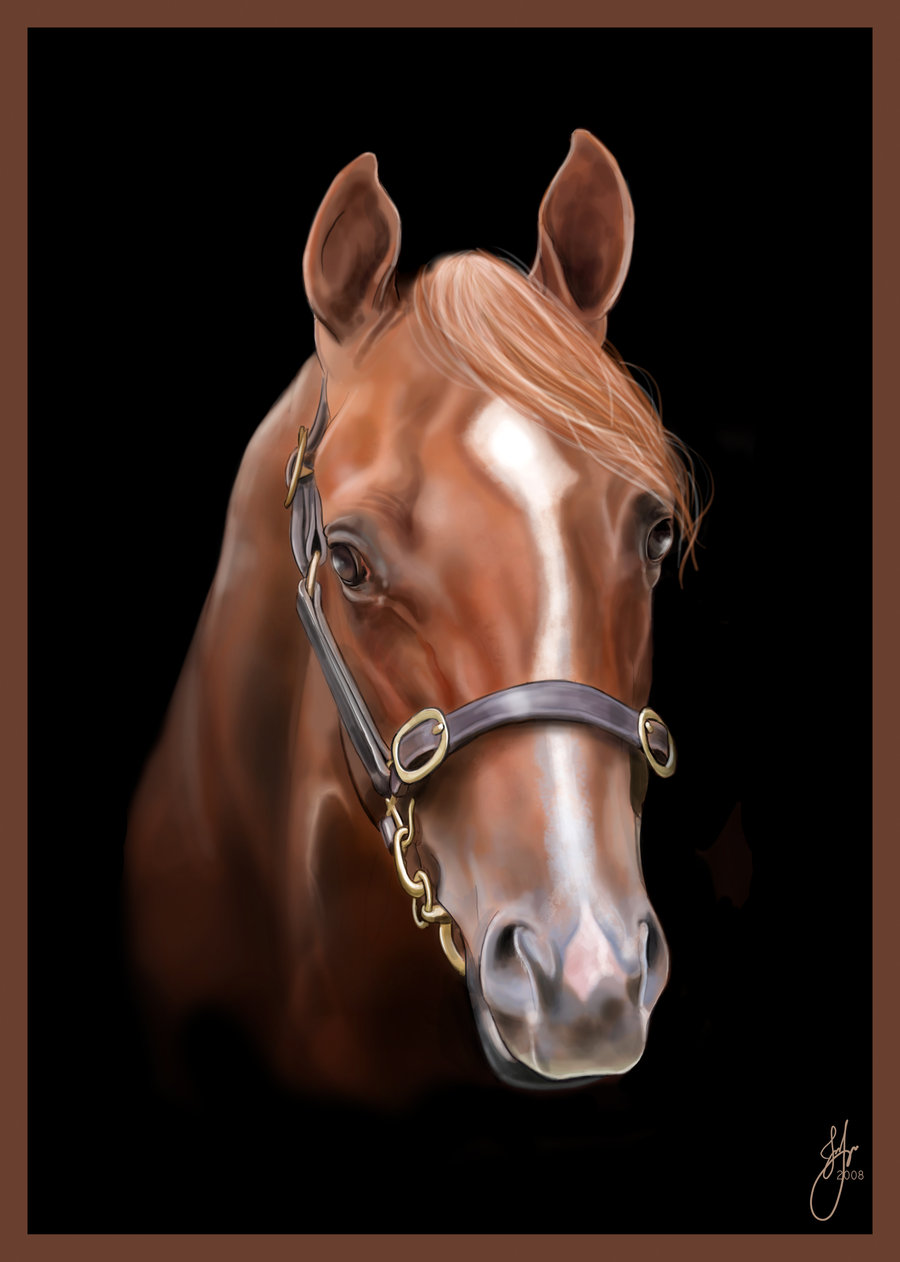 The principle development of the Quarter Horse was in the southwestern part of the United States in Texas, Oklahoma, New Mexico, eastern Colorado, and Kansas.

Some breed historians have maintained that it is the oldest breed of horses in the United States and that the true beginning of the Quarter Horse was in the Carolinas and Virginia.

The colonists were quite interested in short races, and it was only natural that they should have attempted to increase the speed of their horses; to this end some of the best early Thoroughbreds that were brought to the United States included the horse Janus, brought to the United States before the English Stud Book was established, were instrumental in the improvement of these local running horse. Later Imp. Sir Archy and other Thoroughbred stallions were used.

The early improvement in the Quarter Horse-so called because of its great speed at one quarter of a mile-and the early development of the Thoroughbred in the United States were closely associated. Some sires contributed notably to both breeds.

Many short-distance horses were registered in the American Stud Book as Thoroughbreds when the Stud Book was established, even though they did not trace in all lines to imported English stock.

The cowman found the Quarter Horse quick to start, easy to handle, and of a temperament suitable for handling cattle under a wide variety of conditions. Even in the Southwest much was unknown of the breeding of many of the horses that were classified and registered in the 1940s as Quarter Horses.

It is logical, therefore, to conclude that until the Stud Book was established and the pedigrees were based on fact rather than on memory and assumptions, the Quarter Horse should have been called a type of horse rather than a breed.

THE FOUNDATION AND IMPROVEMENT OF THE BREED

A Blending of Bloodlines. It is difficult to give the exact origin of the present-day Quarter Horse because the blending of bloodlines produce a suitable short-distance horse started in colonial areas prior to the Revolutionary War.

This blending of bloodlines and the infusion of Thoroughbred blood was continued in the southwestern range territory as the cow country developed.

Cowboys wanted to be well mounted. Ranchers tried to breed the kind of horses on which these men could work cattle and that could also be used in the age-old sport of racing.

The Quarter Horse was not raced on carefully prepared tracks but was raced on any suitable open space. Organized races were the exception rather than the rule with many of the races being run as a “match race” after a private wager between owner or riders.

In the Southwest country as in the East, no particular attention was made to keep short-distance horses as a distinct breed. Fast horses whose offspring made good cow ponies were crossed on existing stock of mares.

Many times these mares carried Spanish, Arabian, Morgan, or Standardbred breeding, and some have been referred to as “cold blooded” mares. The naming of horses after persons was a common practice, and often when the horses were sold their names were changed; such practices have led to no end of confusion in attempting to verify pedigrees after the horses, breeders, and owners were deceased.

The Contribution of Steel Dust. The first horse of Quarter type that attracted a great deal of attention in the Southwest was Steel Dust, foaled in Illinois in 1843, and taken to Lancaster, Texas, in 1846. He was a blood bay that stood 15 hands high and weighed approximately 1,200 pounds. Steel Dust was sired by Harry Bluff and traced to Sir Archy.

The popularity of Steel Dust as a running horse and as a sire of running horses and cow horses caused many horses that descended from him, or were of similar type, to be called “Steel Dust” horses2. This name was quite common until the American Quarter Horse Association was established and the name Quarter Horse was officially adopted.

Some Other Early Sires. Other outstanding stallions were introduced into Texas before and after Steel Dust. Among these were Cooper Bottom by Sir Archy, foaled in Pennsylvania in 1828.

In 1839 he was taken by General Sam Houston to Texas, where his descendants were considered very fast and made excellent cow horses. In 1849, Old Shiloh, foaled in Tennessee in 1844, was brought to Texas.

In 1889, Traveler, a horse of unknown pedigree, was shipped to Texas in a carload of horses, and legend has it that he had originated in Kentucky. Traveler was apparently not considered a valuable horse because he was used on a scraper and at one time changed hands in a crap game. Traveler and his descendants were mated to some excellent mares, and many Quarter Horses today trace to him in male line of descent.

The Most Influential Sire. The most famous of all sires in the establishment of the Quarter Horse breed was Peter McCue, foaled in 1895, and bred by Samuel Watkins of Petersburg, Illinois.

Peter McCue was registered as a Thoroughbred but evidence was later presented that he was not sired by the horse indicated in his official pedigree but was instead sired by Dan Tucker, who in turn traced his male line to Shiloh. Peter McCue stood for service in Texas, western Oklahoma, and in Colorado, and most modern Quarter Horses trace to him.

Of the 11,510 Quarter Horses that have been registered prior to January 1, 1948,3 2,304 of them traced in male line to Peter McCue through his sons, grandsons, and great-grandsons. Traveler was the only horse that approached him in importance of male lines with 749 similar descendants that has been registered up to that date.

The Use of Thoroughbred Sires and Mares. The outstanding sires in the Quarter Horse type have not always been horses that traced in male lines of descent to recognized Quarter Horses; some trace to registered Thoroughbreds.

In addition, many of the mares to which Quarter Horses have been mated have been Thoroughbred mares or mares of other breeds, so it can truly be said that the breed has been and still is in a formative period. Breeders have not objected to Thoroughbred breeding provided the horses were of the correct type.

Eighteen of the first nineteen registration numbers assigned to horses in vol. I of the American Quarter Horse Stud Book were saved for living horses that had proved themselves as outstanding sires of offspring of Quarter Horse type.

Noted Early Breeders. Many ranchers or persons interested in short-distance racing have contributed to the development of the Quarter Horse. Probably the first really noted improver was William Anson of Christoval, Texas.

Mr. Anson was an excellent stockman who collected a band of horses of Quarter type. Among the best stallions he used was Harmon Baker by Peter McCue. Mr. Anson not only bred, used and raced Quarter Horses but he also was a student of the early history of Quarter Horses and attempted to concentrate bloodlines that he felt were useful in racing and range horses.

Another noted Texas breeder was W.T. Waggoner of Vernon and Fort Worth, Texas. Mr. Waggoner collected the fastest short-distance horses that he could obtain, and it was said that whenever he found a horse faster than any he already owned he attempted to purchase it.

Many of the better modern Quarter Horses are only a generation or two away from Waggoner breeding because after Waggoner’s death, his estate carried on his breeding operations for many years. In the foundation of the American Quarter Horse Stud Book, the term Waggoner bred was considered pedigree enough for registration-so esteemed were his horses by other breeders and by founders of the breed association.

Four other breeders who have had considerable influence in the development of the Quarter Horse through their long association with the breed and through their successful breeding operations were: Coke T. Roberds, Hayden, Colorado; George Clegg, Alice, Texas; S.C. Blake, Pryor, Oklahoma; and Dan Casement, Manhattan, Kansas.

Present-Day Breeders. One of the best-known breeding establishments of Quarter Horses at the present time is the King Ranch, Kingsville, Texas. The King Ranch raised good cattle horses for many years and obtained Old Sorrel, a son of Hickory Bill, as a colt from George Clegg of Alice, Texas; Old Sorrel was foaled in 1915 and died in 1945.

This horse proved to be such an outstanding cow horse and sire of cow horses that a line breeding program was developed at the King Ranch 6 to maintain his relationship in the herd. Considerable Thoroughbred breeding has been used in the development of the King Ranch Quarter Horses.

It would be very difficult to mention all the breeders that have contributed to the Quarter Horse, because many breeders have not made an attempt to keep their horses before the public but have been content to raise their own horses. Some breeders have preferred to keep speed as a primary requisite and have specialized more in horses for racing than for ranch work.

DISCLAIMER:::
I got this information at www.ansi.oakstate.edu/breeds/horses
so that means that it is not my smarts that wrote this.lol. Okay?!?!? :-)))))
even though I could if I wanted to.

Comment by mody Ibrahem on November 11, 2009 at 6:10pm
thank you so much Claire for that values information about American Quarter Horse.
it is great to read and know about it
i love horses too
love,peace..