The Beat Goes On!

This is Blog 3 on the Rainbow Dreaming tour of the US, which started in Oct 2009 in New York and ended in San Francisco. Rainbow Dreaming is an exhibition on the alternative movement in the rainbow region of New South Wales. For more info see www.rainbowdreaming.org

“Smile, you are in San Francisco”, said the black baggage handler at the airport.

“Welcome home”, said Canyon, a native American activist, giving us all a big hug. We were at the last planning meeting before Westfest, billed as the 40th anniversary of Woodstock mega free concert in Golden Gate Park. The meet was held in a large warehouse, packed to the rafters with Westfest vendors and supporters. Boots Hughston, artist and impresario and the producer of Westfest, ran the meeting with panache. The Rainbow Dreaming crew – now down to Hans, Emi, Sim and myself, our gracious helpers Sayaka, Saya and Rina having left for Tokyo – were given a rousing reception. After the meet, many folks came over to greet us. They plied us with invitations, Westfest merchandise, gifts of ganja, and questions about the exhibit.

Before Woodstock in 1969, way before anything of consequence emerged on the east coast, it was San Francisco that was the spiritual and temporal home of the alternative scene in the US. San Francisco, city of St Francis, patron saint of all creatures great and small and the holy land to every hippie who ever dreamt of wearing flowers in their hair.

But before we plunged into San Francisco and Westfest, we went on a little trip: Yosemite National Park, 250 kms by road from San Fran. The trip was Emi’s idea. Honesty demands that I admit I was a reluctant passenger. I wanted to hang out in the Haight, not spend seven hours in a hire car on the highway. But the Haight would have to wait. Here was an opportunity to get away from everything – the manufactured world of men and cities. I’m glad that beautiful Emi won me over.

The climb up the Sierra Nevada and down into the Yosemite valley is stunningly spectacular. Forests of oak and pine, opening out into vistas of glaciated grandeur: vast cathedrals of granite, 2400ft waterfalls, towering spurs and cliff faces, altars fit for giants.

This was the great American photographer Ansel Adams’ playground. Adams first came to Yosemite as a 14 year old with a Box Brownie. He was to spend three decades living, working and photographing the place. He spoke of “the primal song of the wilderness—the whisper of silver winds in the lonely forest--the hollow chant of falling waters.” Adam’s photographs of the Yosemite landscape are iconic images that helped create the idea of wilderness as something worth “saving” in the popular imagination. His photos were used in campaigns by the Sierra Club.

Nothing could save the Ahwahnee, the original inhabitants. They fell victim to the California gold rush and the state militia in the 1850s. Their broken plinths and abandoned hearths speak of a desolation beyond words. The sunset dyed the canyon deep red, then dark crimson. The lights of climbers bivouacked on the cliff face for the night flickered in the gathering dark as we left the valley.

From the Trips Festival, to the Human Be In, to the Summer of Love in 1967, San Fran was where it was all happening. And Haight-Ashbury, a genteel, seedy, low rent neighbourhood on the edge of Golden Gate Park, was, for a short time in that golden, paisley and psychedelic-hued year, the counter culture capital of the world.

Paul, owner of Land of the Sun, a gift shop with a penchant for hippie paraphernalia, had been in the Haight in the golden age. “I was there before, during and after. I remember $2 concerts with the Dead, Hendrix, Santana, that went on till 2am; Janis driving up and down the strip in her Porsche. The Dead were next door at 710 Ashbury. I haven’t been to a concert since Jerry Garcia died in 1995.”

“That was then. But the Haight still has a spark. The community has managed to block certain kinds of development, like chain stores from moving in. There’s resistance to the Haight becoming like any other suburb. Sure, the Haight is an echo of what it used to be, but it’s an echo worth listening to. The Haight is unique, it’s a peace bracelet.”

Mark, a more recent resident, agreed. “Despite all the changes, the energy is still there. I remember going to a Phish concert recently. Looking at all the kids, I could have been at a Dead concert in the seventies. There are these tendrils of influence from that time and the Dead have a lot to answer for”, he said, smiling. “Everything’s still the same, except our hair.”

Boutiques and op shops were doing a roaring trade in wigs of every description and outlandish costumes in a pre Halloween shopping frenzy. Teenagers in Marilyn Manson outfits flashed us the peace sign as Hans and I walked towards Hippie Hill.

Encouraging the illusion of a wormhole through time, Hippie Hill is approached through a dark tunnel. Psychedelic art with paintings of mushrooms lined the path. A pair of boots mysteriously sits near the entrance. A hooded figure whispers: “Would the dudes like to sample some Blueberry?”

We sat on the hill under tall trees. Kids played soccer in the oval at our feet. A large, white peace symbol in splattered enamel, Jackson Pollock style, marked the centre of forking paths. Small groups of people, mostly young, dotted the hillside, some playing guitars, singing and passing joints. In the marmalade evening light they looked like stragglers from an enchanted army.

It looked like all the foot soldiers in the armies of peace, love and enchantment, and their camp followers, had assembled for Westfest, at Speedway Meadows, Golden Gate Park, on Sunday 25 October.

Native American elders, Zen Buddhist priests, musician for peace, the butterfly folk, the rainbow family of love and light, aging hipsters and young ferals, the Hells Angels and the Hare Krishnas, Guitars Not Guns and Grannies for Medical Marijuana, flaunting their glad rags, flying the flag, flashing the peace sign, getting high on the herb, the vibe, the roar of the music from three stages and the brilliant sunshine. Every surviving rock and roll star from the sixties and seventies (and their dog) seemed to be there. Ray Manzarek from The Doors, Paul Kantner from Jefferson Airplane, Denny Lane from The Moody Blues, Country Joe McDonald, plus the original cast from Hair. Some old timers would have had flashbacks and it wouldn’t have been the acid! And the order of the day, proclaimed by speaker after speaker, was the same: make love, not war. It was the favourite sixties mantra all over again! “Are we proud to be hippies”, the MC would yell and the crowd, estimated at around 100,000, would respond with a jubilant roar.

Westfest was the culmination of the Rainbow Dreaming US tour. We had been assigned a 40ft diameter tipi to set up the Rainbow Dreaming exhibit. At the last minute the deal fell through. Douglas Kolberg, the producer of the Greenzone at Westfest, pointed to a grove of trees and said: “Can you do something with these.”

We could. We had Emi and Sim, our two agile helpers, who climbed up the trees and set up a harness using wire and rope to hang the exhibit. The spot was right in the middle of the vast concourse between the two main stages, so hundreds of punters got to see the exhibit.

Canyon, the native American activist who had welcomed us with open arms at the Westfest planning meet, was one of the last visitors at the Rainbow Dreaming exhibit. He recounted for us the White Buffalo legend.

Two brothers were out hunting for buffalo. They followed the trail for days. Finally, they spotted the herd. They were excited to see one of the buffaloes was white. To their amazement, the white buffalo turned into a beautiful woman. One of the brothers would have favour with her. He was burned to ashes. The other brother bowed before her. That winter, she took him to the lodge, taught him the prayers, taught him many things. In spring, she turned back into a white buffalo. She said: “I will feed you, now and in the hard times to come. You will use me for your ceremonies. Remember me and I will be with you always.”

Across time and the blood-dimmed tide of history the White Buffalo legend came alive in Canyon’s retelling. We were all yearning for a new way to relate to the earth, to women, to ourselves. The legend seemed to provide vital clues to our renewal as a civilisation. There were tears in his eyes as he finished the story. He said: “Remember, inside you is the centre of the universe. And the centre is love.”


The Beat Goes On

My last port of call in San Fran was North Beach, the hangout of the Beats. The Beats were the precursors of the hippies. Like a Russian icebreaker on speed, the Beats cut through the frozen tundra of smugness and coldwar hysteria of 50s America. Beat literature and Beat attitude swept across the globe like a meteor, scattering flames and sparks that ignited minds and hearts. As a teenager growing up in the seventies in faraway Mumbai I avidly devoured the beat writers. Kerouac, Ginsberg, Corso, Burroughs were some of my early heroes.

While the Beats were more into booze and benzedrine, as opposed to the psychedelic reveries of the hippies, they laid the groundwork for the hippie movement. Their Rimbaudean manifesto of excess as the path to satori, flirtation with eastern philosophies, and eclectic approach to sexual liberation was the seedbed that sprouted the summer of love. “Poetry is the shadow cast by our streetlight imaginations”, wrote Lawrence Ferlinghetti, Beat poet and founder of City Lights, the famous publishing house. City Lights still stands, along with Vesuvio, the Beat watering hole. Alongside runs Jack Kerouac Alley, with quotes from various Beat writers cast in stone in English and poems by Li Po and Confucius in Chinese. Chinatown is next door.

Across the street is the Beat Museum. I spent that last afternoon surrounded by Beat memorabilia, including Kerouac’s typewriter, the signed, annotated copy of Ginsberg’s ‘Howl’ and the voices of my youth. Some of those voices sound strangely prescient. Here is Ken Kesey, author of ‘One Flew Over the Cuckoo’s Nest’, friend of the Hells Angels and the Grateful Dead, Merry Prankster and veteran of many an Acid Test, on America’s ‘civilising mission’ in another war. "You can't bomb for a humane reason. What we should do is just Mother Teresa them to death with love. It's that old hippie nonsense but it's still the best stuff there is."

"I see the Beat Generation as an enlightening movement," said Beat Museum founder Jerry Cimino. "Because they followed their dreams they changed the world."

But I’ll let the maddest Beat of them all have the last word: “All human beings are also dream beings. Dreaming ties all mankind together.” Jack Kerouac, Book of Dreams.

Thanks to our hosts in the US, including Traci Mann & Nanci Callahan in NYC, Rob Robinson at Harvestfest, Shelli Lipton & Nathan Koenig at Woodstock Museum and Douglas Kolberg & Boots Hughston at Westfest.
Thanks to our principal sponsor Happy High Herbs and our media sponsors Byron Shire Echo & Bay FM.
This project was auspiced by Byron Community & Cultural Centre & produced by the Rainbow Collective. 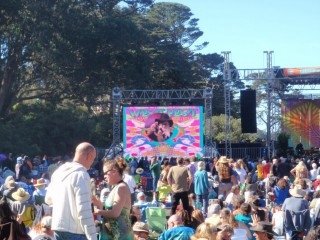