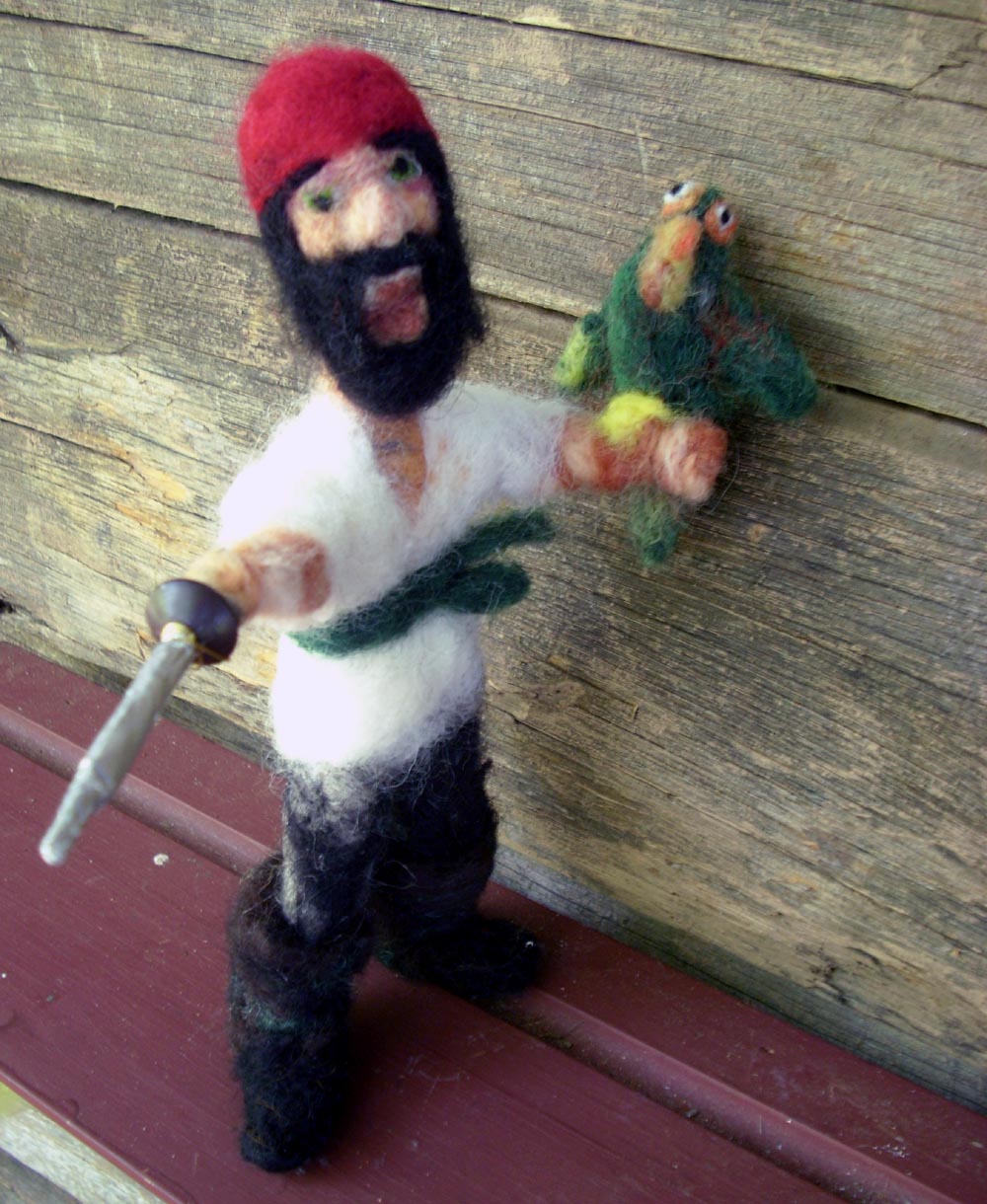 We have as a culture glorified Pirates for a long time. Even I created this little pirate doll last year.

Ayse would like us to join a pirate group:
She writes:
“Sources from Mogadisco report some truth. Somalian coast is no man's land. Since 1992 big fishing vessels from Greece, UK, Spain and Norway exploit this waters. Italian mafia did illegal toxic and nuclear waist disposal. All complaints were ignored by UN general assembly in New York. Fishermen defend their only source of living. They started coast guards.
Same companies return now with warships to protect the fishing mafia.
Hillary Clinton prepare the invasion of Somali coast line with NATO.
the real pirates enjoy their profits from the blood of this people in comfortable conference rooms.
Save the last pirates.”

I respond:
Even though I totally see what you are saying about the pirates as activists of sorts. desperately trying to survive in a world that has been abused such as the coast off the horn of Africa. I see that things are not good for Somalis and others in that region. Refugee camps are over flowing, conditions are not good. There are many Somali people who live near me and I have heard their stories, eaten in their restaurants, enjoyed their company. I think that there actually more peaceful ways to protest. Piracy is to me an act of war and in fact pirates were historically mercenaries in days of yore. I see that you are feeling intensely about the injustice in the region and indeed in the world, but it sounds that by playing devil's advocate that you support war as a means to justice, and I am not sure if this is what iPeace is all about. It could be that you feel passionately and that your wording is harsher because English is not your first language. It could be that I am misunderstanding you. If this is the case please make your self clearer.

While I realize that the situation is grave for many Somali people and I know this from friends who came here from the Somali refugee camps and from what I have read. I don't think that repeated attacks on merchant ships is the way to go. In fact, it might only make things worse in that region. There fore I am not joining your group. Susan

She Writes:
“ok, I understand...for most people here on iPeace the most serious problem is ...
is ning nicer than facebook, a really threatening question...

I’m sorry - i can feel the pain of other persons
today’s news section:

German army officers want "harsher measure"
Hillary Clinton prepare a "package"
CIA got amnesty for "waterboarding"
NATO does maneuvers in Georgia against the will of Russia...

when u think its bad do defend you life with handgun
bad good to send a warship armada of the latest technology...

I am probably wrong here”

I respond:
Okay...
I can’t speak for others, but I don’t think that is generally true that we are all here to debate Ning vs. Facebook. Sure we all are in different circumstances and come from different places none of which is our fault.
In my case, I have taken stands against violence all my life. ..I think that the outrage you express is totally understandable, but to attack others who are actually making an effort the best they can in non violent ways is not conducive to finding a solution.... I like a little edge, I really do, but it usually doesn’t serve me well.

It does certainly seem as if these pirates feel like they have no choice but to attack merchant ships. They seem to have no forum where they can be heard. When I say that this could make matters worse, indeed various overly well armed states are gearing up to protect their citizens and interests. A spokesperson needs to step forward. Maybe we need a free legal clinic in international law. Perhaps there is such a thing if not there should be. I think this is an idea whose time has come. In short I would join a group more geared towards solution instead of a group that glorifies piracy would be perhaps one that more people would likely join and you would have more people discussing and perhaps working on this issue.

P.S. your image of the powers that be Corporate interests) as pirates is a good one. Indeed who are the true pirates in this picture?