Van Gets Ripped or The Sleep of Unreason

Van Gets Ripped, or The Sleep of Unreason

Marijuana legalization activists and their supporters on the East coast were to meet at Camp Minglewood in the Catskills, a couple of hours north of New York, for the Harvest Festival & Freedom Rally, on 9 Oct. It was an opportunity too good to be missed. Our hosts from the Woodstock Museum, Shelli Lipton and Nathan Koenig, had booked us a spot at the Festival. They had also booked us into a bunkhouse, with 10 bunk beds. By now we had mushroomed to a party of 10.
It wasn’t pot, but potties that preoccupied us the three days we were there. The toilets were blocked. Much time and energy was spent agonizing over the situation and negotiating the portaloos well before the happy horde that had descended on the Camp trashed them every morning.
Harvest Fest, the child of Hemp activist and performance poet Rob Robinson, was now in its thirteenth year. The legal situation with pot in the US is complex and confusing. Some states (California) allow the medical use of marijuana. Others will bust you for possessing rolling papers. The talk at the Camp was all about the bust of a long-time hemp activist, who had been caught with a whole lot of pot that he was bringing to the festival. Regardless, the pot was plentiful.
From pot to politics. I met Kurt Shotko, a member of the Greens party. Kurt was of the opinion that the Republicans and Democrats were cut from the same cloth, manufactured by big business. “Look at what Obama’s doing in Afghanistan. He’s sending more Americans to die there. We need an alternative to the main players. We’ve got to wake up to the reality that the American dream has been a nightmare for a lot of Americans and for the rest of the world, especially in Iraq and Afghanistan. We have been asleep for too long. We need a revival of common sense. Only a massive program of self education is going to do it.” Then he quoted from the Populist Program, published in 1892: “They propose to sacrifice our homes, lives and children on the altar of mammon; to destroy the multitude in order to secure corruption funds for the millionaires.” 1892! The sleep of unreason had been a long one.
But Kurt was hopeful of the next generation. That’s why he set up camp at festivals across the US. And that’s partly why we were there too.
The Rainbow Dreaming exhibit was attached to a wall in the main music hall. Thus many, mostly young, punters got to see the exhibit. This was where The Wailers played on Saturday. I caught the Wailers when they played in Byron and I’m happy to report that they are still wailing away.
But what struck me most about the music at Harvest Fest was the pervasive influence of the Grateful Dead, the legendary sixties psychedelic band from San Francisco. From Cabinet, an established US indi band that played the main stage, to camp fire songs at 4 am, the Dead were everywhere, on so many t shirts and stickers, in so many riffs and improvisatory moments, as a psychedelic glint in so many eyes.
I spoke with Jane, an artist from New York, who had a stall selling Dead memorabilia. She had grown up in San Francisco and was still a Deadhead. Her eyes misted when she spoke of Jerry Garcia: “You could see so much love pouring out of him. It was a love affair that lasted and lasted and it’s still going strong even when he’s gone.”
Minglewood Moment: across from the festival site, two lovers sit on the steps of a boat ramp. The dying sun paints purple tints on the tops of the maple and elm; waterfowl break the surface of the lake. A band is playing the Dead’s “China Cat Sunflower.”

Woodstock: The Town that Time Forgot

In Rip Van Winkle, Washington Irving’s story, a man wanders off into the Catskill Mountains, meets some rather strange companions who serve up a suspiciously heady brew, and falls asleep under a tree. When he wakes up, he finds that some 20 years have gone by and his world has changed.
The town of Catskill is 30 minutes away from Woodstock. Some 40 years have gone by after the infamous Woodstock festival of 1969. And the world has changed since those heady days. But walking around Woodstock, the town that gave a name to the festival, (which happened in the neighbouring town of Bethel, some 100 kms away), you could be forgiven for believing that it’s still in the thrall of those halcyon days of hippiedom.
Our first port of call was the Woodstock Town Board meeting that night. Benny Zable, Nimbin’s ambassador to Woodstock, presented letters from Nimbin and the crew made a presentation on the Rainbow Dreaming exhibit and its relevance to the whole Woodstock legacy. The meet was dominated by a spirited discussion over rezoning issues, something very familiar to us on the north coast. Would Woodstock go the way of other small towns and be besieged by rampant development, or would it stay true to its alternative legacy?
That night we also visited the Bearsville Cultural Centre (set up by Albert Grossman, one-time manager of Bob Dylan, Janis Joplin and The Band) and Alchemia Café to catch some live music, including a spirited set by Adam, a young musician we had met at the Byron market drum circle!
Guided around by Benny, on our very first day in Woodstock, we met some representatives of Woodstock’s hippie past: Jogger John, the local village savant, who used to jog everywhere, but, due to his advanced age is now is on a bike; Day A, the village barber, who runs a soup kitchen for the Rainbow Family in town; Grandpa and Grandma Woodstock, an elderly couple, dressed the part, almost town mascots. Woodstock itself is full of funky cafes and art galleries. Turn a corner and spy a Zen garden, complete with waterfall and pergola.
In the centre of Woodstock town is the village green and the peace pole, with peace messages in several languages. We bumped into Fr John, a priest and peace activist. When he heard that two of our crew, Sayaka Nakao and Rina Terasaki, were from Tokyo, he beamed at them and said: “ Lets set up a peace link between Woodstock and Tokyo. All it takes is five people. Five is the magic number. Can you find five friends in Tokyo who may be interested?”
Fr John also runs the Hippie Church, on the hill overlooking Woodstock. This was the very church where Bob Dylan was rumored to have married the love of his life, Sarah, his sad eyed lady of the lowlands. The church wears the patina of age, its icons fading in the dim, dank light streaming through stained glass windows.
In stark contrast is the Buddhist monastery next door. Set up in 1975, the monastery is linked to the 10th century Tibetan Kagyu lineage. Its halls are huge and lushly decorated with tankas, its massive Buddha is gold-painted, its prayer lamps cast a beatific glow on meditating monks and visitors; its gift shop bulges with merchandise, all a tribute to Buddhism’s growing influence in the new world.

The next morning, my very first snowflakes, fine and feathery. It was too cold to venture out. Emi Iizuka and Simeon Michaels, both from Byron, had joined us in Woodstock. We were toasty warm at the Woodstock Museum, hosted by Shelli and Nathan. Under the tutelage of Shelli, the sacred Indian corn was brought out and inspected. Purple, yellow, orange, red and black, this was authentic Hopi corn. The girls played with the corn silk, good for medicinal tea and dress ups, fake moustaches and beards. They were transformed into imaginary characters, magical beings, the warrior princesses of Genghis Khan, dressed as men to pass unnoticed amidst the ripening corn. Shelli makes beautiful corn necklaces, a craft she learnt from Rainbow Weaver, a Mohawk Clan Mother.
Nathan spoke about the connection between the Hopi and the Tibetans. “Padmasambhava, the founder of Tibetan Buddhism, said: When the iron bird flies and the horses run on wheels the Tibetans will be scattered over the face of the earth and the dharma will come to the land of the red man.”
Nathan went on: “The Hopi’s felt that this might have something to do with the dharma coming to the US. They have prophesies to. After the swastika and the sun, there would be another force, symbolized by the colour red. This force will wear a red cloak or red cap. Spiritual wisdom will come from the East. This spirituality must spread. If that does not take root, others with the red symbol will invade from the West and crawl over the land in one day. The Hopis think this could be the ‘red’ Chinese.”
“When the Tibetan Karmapa visited Hopiland in 1974, he said: We must have know each other before; your features, ceremonies and way of life are similar to our own.
When we bought Hopis to the monastery in Woodstock in 1979, the two cultures again recognized each other, and the Hopis said that the Tibetans may very well be the long lost brother who left them at the beginning of time and went to the other side of the earth to balance the earth spiritually.”
Said Shelli: “When the shit hits the fan, we won’t survive unless we cooperate with each other. That’s also what the Hopi prophecies speak of. The Hopis are known as the ‘peaceful ones’.”
While we spoke of prophecies, outside, in the gathering gloom, Tiago Guimaraes, a Brazilian artist, was busy carving out a statue of a man with a guitar, the quintessential hippie hitchhiker, his hand raised, his fingers flashing the peace sign.
The Rainbow Dreaming opening at the Woodstock Museum on Sat 17 Oct was a modest yet sweet affair: local musos were in attendance and members of the Woodstock drum circle banged their bongos. The highlight of the evening was meeting Elliot Landy, the famous Woodstock photographer. Elliot was all praise for the exhibit, gave away signed copies of his book to all the crew and offered to help us find a publisher for a book on the exhibition. The last act of the day was raising the sculpture of the hippie hitchhiker and placing him on his pedestal: a symbol of Woodstock’s hippie past and a pointer to its uncertain future as a cultural pilgrimage centre.
On our last evening in Woodstock, we participated in the Woodstock Earth drum circle. Some 30 drummers were gathered in the backyard at Day A’s house. In summer, the drummers gather at the village green and spill out onto the road. As the sound of the drums rose over the autumn dusk, we were again reminded of how lucky we were with our vibrant culture of communal drumming and dancing in the rainbow region.

Last days in New York: the Bangladeshi cigarette sellers; the African rickshaw pullers in Central Park; the old men and women carting large bundles of recyclable cans and bottles; the man in Times Square offering to sell me a 15 carat gold ring or Obama condoms. While the crew went shopping and sightseeing I wandered back to Central Park. More than the statue of Liberty, than Ground Zero, than the suicide gulches and canyons of Wall Street, I was drawn to the spot with the Imagine mosaic and tribute to John Lennon. Park benches line the walkway, each with its dedication. I sat there, amidst the touros and derros, as the shadows lengthened. Then I saw these lines from Dylan Thomas, carved on a park bench: “Though lovers be lost love shall not; And death shall have no dominion.” 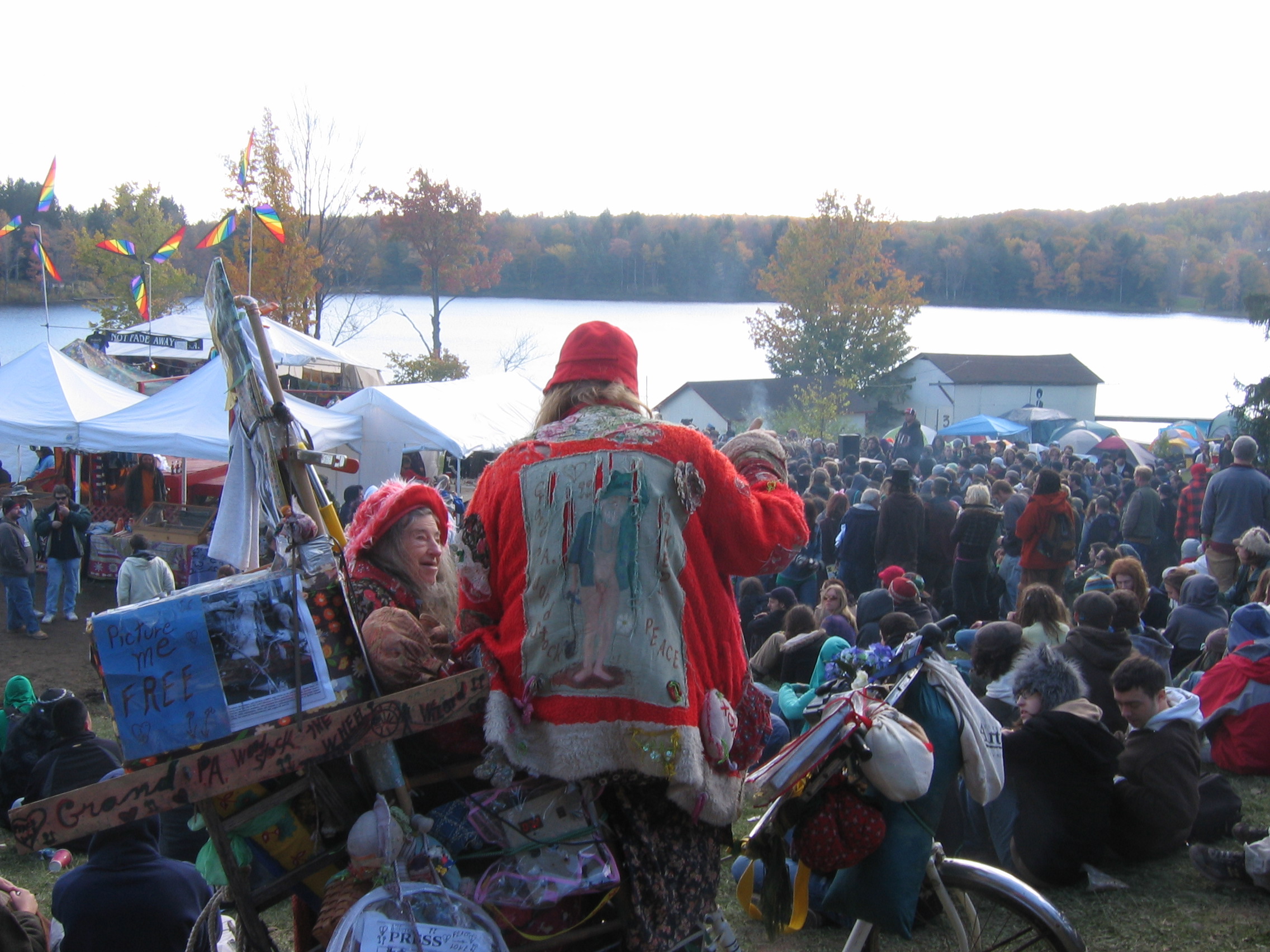