What are Angels? and do I have to be of a particular religious persuasion to believe in them?

The following information provides an overview of a commonly held understanding of the Angelic Kingdom of Light. Please do not let this limit your own vision or understanding of Angels and the Spiritual Hierarchy in any way, especially as the increase in Earth’s vibrational rate and our consciousness is allowing unprecedented contact from the Angelic Realms, with more and more Angels and Ascended Masters revealing themselves to those who are ready.

Whatever your beliefs, it is not necessary to alter them in any way in order to communicate with the Angelic Kingdom of Light.

The word Angel is thought to derive from the Greek word angeloi meaning "messenger" and the Sanskrit word angiras meaning "divine spirit" and "courier".

Angels emanate from a different stream of consciousness to that of humans, from the dimension of original divine source.

Having the ability to open channels of divine communication, they are messengers of god/of all that is/of the absolute source and universal law . . . whatever resonates with your beliefs, whether such beliefs are of an organised religious nature or not.

Angels are messengers, guides and teachers and have many other tasks and missions. They have no physical bodies as they are beings of light and energy who occupy the non physical dimensions that co-exist alongside ours.

Being high spiritual beings of pure energy, they vibrate on such a high, fast level that, although they occupy the same space as humans, they are usually invisible to us.

As such we tend to recognise their presence via sensations or a subtle knowing. On the occasions when we are able to glimpse them more physically, we see them as incredibly bright beings – often manifesting in rapid movements of surreal shimmering light, flashes or patterns of brilliant colour.

Belief in angels has formed part of humanity’s spiritual quest down through the ages, and references to angels can be found in every religion, every culture.

Therefore, when we see angels in the most physical manifestation of which they are capable, they tend to take on whatever appearance best fits in with our ability to perceive them. Often this will be in human form - with wings - because that is how our memory has recorded them based on how they have been portrayed since time immemorial in art, literature and religious texts.

Whilst they may appear to us as male or female (and may indicate a male or female name) this is just to help us with our connection to them, since angels are androgynous. They are beyond the need for sexuality because their masculine and feminine energies are perfectly balanced. Also since they do not see themselves as separate from each other and all that is, they are not known to each other by individual names.

It is said that angels work on the golden ray of true unconditional love and wisdom and, certainly, angels have immeasurable love and compassion for us and for our planet as we work through these times of huge turbulence and change which are causing us so very much distress.

Belief in angels has formed part of humanity’s spiritual quest down through the ages, and references to angels can be found in every religion, every culture. Interest in angels grows daily and their loving, supportive presence is unmistakable to sensitive adults and children, and to those seeking inner peace through spiritual development.

If you have been drawn to angels because you are looking for deeper meaning to offset the shallowness of modern living, or if you’ve been facing all manner of challenges recently, it may comfort you to know that you are certainly not alone.

In these early years of the 21st century, levels of consciousness have risen considerably, triggering ever greater tests for humankind generally - and lightworkers in particular. On an increasingly frequent basis, everyone is having to contend with unprecedented challenges on personal, relationship, family, organisation, national and international levels.

The bitter conflict, appalling injustice, inhuman disregard for decent behaviour, corporate greed . . ., and all the other very low energy manifestations of the confusion and discontent that currently abound are causing deep distress throughout our world.

And, on personal levels, the struggle to keep from being sucked down into and tainted by negativity can be exhausting.

As a species we have forgotten that there is an immense, expansive, cosmic pool of unconditional love; we’ve lost our connection and feel insecure in so many ways.

Vast numbers of human beings are trying to assuage these feelings of insecurity by acquiring more and more possessions, consuming more and more of the Earth’s finite resources and seeking to dominate others in all manner of ways - each with wide reaching harmful consequences.

But don’t despair, angels can help us re-connect to and be totally a part of the cosmic pool of love - for the good of all of creation. Angels are constantly working to promote peace and harmony here on Earth and they can help in all manner of ways - but only if asked!.

So work with them in connection with your own individual concerns, and also take time to enlist their support in helping to enlighten humankind to achieve lasting peace and harmony through unconditional love and understanding.....Kay Zega 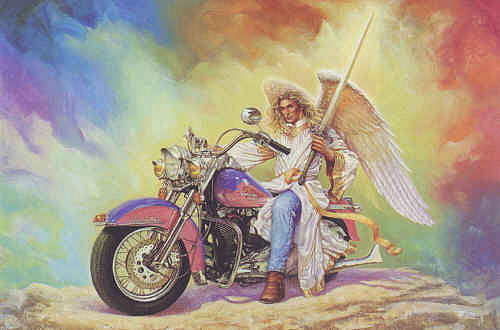 You're an angel Motorcyle Hippy

For all that
together we
e-mail address and times
you shared here ...
For every post made with love ...
The days and nights, spring and winter
"My Gratitude"

Are you part of my life.
For this and much more
You're an angel

Comment by Valerie Rawlings on September 10, 2009 at 6:52pm
Thanks for spreading the love

Comment by Maraki on September 8, 2009 at 4:12am
Thank you for your angelic presence! I love your colorful zebra! Can I use this picture on my blog?

Me thinks Hippy Al is an Angel ;-) missing you dear friend, love this blog post! hugs and loads of love xx

Comment by Colette Morgan on August 7, 2009 at 1:17am
Thank you so much for this page/blog, not sure what you call it....a link? Angels are just awesome......since my mam passed away just over three weeks ago......I have been finding the same white feathers in strange places, hanging on a thread when I went to the shop, on the step when i went to collect my car from the car park and other places. I even had a tiny white feather on the back seat of my car. I found this page very touching. My grief is pretty much all over the place and I am just keeping busy, working, I work for a womens organisation & I write learning units about domestic abuse, supporting my dad, doing massages, writing in my journal. I know it will catch me soon enough....but I have learnt or had reinforced that people are just lovely....in love & light xx

Comment by Motorcycle Hippy Al on June 16, 2009 at 7:13pm
May angels rest beside your door,
May you hear their voices sing.
May you feel their loving care for you,
May you hear their peace bells ring.
May angels always care for you,
And not let you trip and fall,
May they bear you up on angel's wings,
May they keep you standing tall.
May they whisper wisdom in your ear,
May they touch you when you need,
May they remove from you each trace of fear,
May they keep you from feeling greed.
May they fill you with their presence,
May they show you love untold,
May they always stand beside you
And make you ever bold.
May they teach you what you need to know
About life here and here-after.
May they fill you always with their love
And give you the gift of laughter

"Here is a moment I spent with Trinity Rose my grand daughter on Thursday .......

i saw my grand daughter yesterday .. and she was telling me she is naughty . JIJI .. i said *u r not naughty* * u just like to be naughty sometimes* :-) and i showed her my angel wings ... and told her I could see hers

"i asked her a few times if she could se mine .. n she said no .. then i asked her wot she did when she was big ... she said lotsa things"

so I then asked her if she could remember when she had wings and she said yes .. then i said with excitement i could se her wings and i asked her to get me a pen and paper

she went to her mama's bag and brought me back a pen and paper .. so i drew her wings on the paper and said these were on her back

so then i told her how i coul feel mine get really small when I am being naughty .. and when i am kind caring and happy that my wings grew big but they never dissappeared

"then i asked her again if she could FEEL her wings and she said yes and looked over her shoulder and said she could SEE them ." see was glowing so excited .. only 3 years old she is

so as soon as she started demanding or yelling .. i would say OH! ur Angel wings just shrunk in size ! they r little now because u started to be like a angry little girl .. U better come back to me Angel .. I SEE u and let ur wings grow out again

she instantly changed back into this Angel .. and theglow ... and peaceful she was .. and she looked over her shoulder to make sure they were there

"I said .. *can u still feel and see ur wings Trinity Rose? and she looked over her shoulder aagain ... and yes very strong * YES I can see them, ..

"I took her down down ... for a walk .. every now and then I would say ... * R ur angel wings still there and spread out? snd she knew straight away and would look over her shoulder just to make sure :-)"

Comment by Rev Dr Alva Elizabeth Folkes on May 29, 2009 at 3:47pm
Wonderful insights. Did you know that angels work with us daily and send information to us many times a day. through our solar plexus. It is what is called the gut instinct. They give us infromation to make us aware of choices that we can make. Most people are aware of these instincts but do not always choose to follow them. The more aware you are of the connection to higher self through the solar plexus the easier it is to understand how to work with the connection.What a magnificent picture of Michael. I have one very similar. love and light Alva