Why Sing For The Children Is So Important 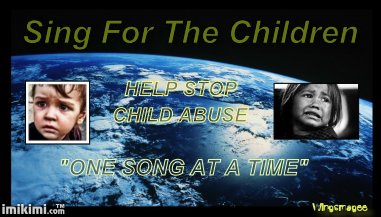 I am so very grateful to Casper & Kelly for stepping up and taking some action to help prevent child abuse. I am a survivor of sexual, emotional & physical child abuse that began at the age of six and continued into my teen years. I became more or less a renegade AS A RESULT OF THIS TREATMENT.
At age sixteen I gave birth to a child a, son who was also a victim of sexual abuse at the hands of two teenage boys. The sad thing is I was so angry about the abuse I'd experience that I told my son if anyone ever touched him in that way I would kill them and more than likely had I known about his experience I would have done just that. Unfortunately he kept silent about the experience because he knew me well enough to know that I meant what I said. So instead he turned to injecting drugs as an escape mechanism. He developed HIV and later full blown AIDS. He died at the age of twenty-five in 1995. My son shared his experience a month before his death. It is important that parents be educated not only in recognizing the signs of child abuse but also talking to their child about it without making them afraid to communicate with them.

I also feel that there should be more aggressive programs put into place for the offenders. I'm inclined to believe that sexual abuse is a learned behavior which creates a cycle of continued abuse. This cycle must be stopped and can only be stopped by the involvement of parents, schools, churches, neighbors and most importantly government.

So PLEASE GET INVOLVED!!!!!