And Celebration of women’s day

Report of Seminar Organized by and Held at

an NGO in Faisalabad, Pakistan

The seminar started with prayer by Ms, Perveen.

Dr. Shameem Arshad, Program Coordinator, HDO, welcomed all the participants and presented an introduction to HDO DOH    and its activities.  Then she invited first speaker Dr. Shabnam Noman.

Purdah or Child Marriage (Vani) is followed in many communities of Pakistan.  It is practiced in various ways, depending on family tradition, region, class, and rural or urban residence.  Although the Child Marriages Restraint Act makes it illegal for girls under the age of 16 to be married, instances of child marriages can be found. Vani is a custom followed in tribal areas and the Punjab province.  Girls are forcibly married off in order to resolve the feuds between different clans; the Vani can be avoided if the clan of the girl agrees to pay money, called Deet, to other clans.  Swara, Pait likkhi and Addo Baddo are similar tribal and rural customs that often promote marriage of girls in their early teenage years.

Watta satta is a tribal custom in which brides are traded between two clans.  In order to marry off a son, parents must also have a daughter to marry off in return.  If there is no daughter to exchange in return for a son's spouse, a cousin, or a distant relative can be substituted. Even though Islamic law requires that both partners explicitly consent to marriage, women are often forced into marriages arranged by their fathers or tribal leaders.

Honor killings are still practiced in Pakistan.  A majority of the victims are women and the punishments meted out against the killers tend to be lenient. The practice of summary killing of a person suspected of an illicit liaison is known as karo kari in Sindh and Balochistan.  In December 2004, the Government passed a bill that made karo kari punishable under the same penal provisions as murder[44].  Many honor killings have been done against women who marry against their family’s wishes, who seek divorce or who have been raped.

Marriage to Quran is practiced in some parts of Sindh.  Marrying a woman to Quran is prevalent among landlords, although this practise is alien to Islam and has no religious basis. The practice is often used by men to get the land of their sisters and daughters.

Culture and dress:  Although the women’s dress varies depending on region, class and occasion, the shalwar kameez is the principal garment worn by Pakistani women. Ghararas (a loose divided skirt worn with a blouse) and lehengas were very common earlier, but now they are worn mostly at weddings.  Few Pakistani women wear the hijab or burqa in public and the degree to which they choose to cover varies.  Some Pakistani women who do not wear the hijab may wear the dupatta or chadar instead.  A Sari is a formal dress worn on special occasions by some mainly urban women. The so-called "Islamization" under General Zia ul Haq's dictatorship branded the sari as an "unIslamic" form of dress.  The sari is now making a comeback in fashionable circles.  Western garments such as T-shirts and Jeans are occasionally worn by young urban women.

Education and economic development:  In Pakistan, women’s access to property, education, employment, etc., remains considerably lower thasn men’s.  The social and cultural context of Pakistani society is predominantly patriarchal.  Women have a low percentage of participation in society outside of the family.

Despite improvement in Pakistan’s literacy rate since its independence, the educational status of Pakistani women is among the lowest in the world.  The literacy rate for urban women is more than five times the rate for rural women.  The school dropout rate among girls is very high (almost 50 percent) and this despite educational achievements of female students being higher than male.

Patterns of women’s employment vary throughout the Muslim world.  As of 2005, 16% of Pakistani women were “economically active” (either employed, or unemployed but available to furnish labor), whereas 52% of Indonesian women were.

Although women play an active role in Pakistan's economy, their contribution has been grossly underreported in some censuses and surveys.  The 1991-92 Labor Force Survey revealed that only about 16% of women aged 10 years and over were in the labor force.  The World Bank's reports of 1997 stated that women constituted only 28% of the country's labor force. According to the 1999 report by the Human Rights Commission of Pakistan, only two percent of Pakistani women participate in the formal sector of employment.  However, the 1980 agricultural census stated that the women's participation rate in agriculture was 73%. The 1990-1991 Pakistan Integrated Household Survey indicated that the female labor force participation rate was 45% in rural areas and 17% the urban areas.  Pakistani women play a major role in agricultural production, livestock raising and cottage industries.

Land and property rights: Around 90% of the Pakistani households are headed by men and most female-headed households belong to the poor strata of the society.  Women lack ownership of productive resources. Despite women's legal rights to own and inherit property from their families, there are very few women who have access and control over these resources.

Violence against women in Pakistan is a major problem.  Feminists and women's groups have criticized the Pakistani government and its leaders for whitewashing the persecution of women and trying to suppress information about their plight in the international arena.  Skepticism and biased attitudes against women’s complaints of violence are common among prosecutors, police officers and doctors in Pakistan.  Such complaints often face delayed or mishandled processing and inadequate or improper investigations.

Rape is one of the most common crimes against women but grossly underreported due to the shame attached to the victim.  Marital rape is not recognized as a criminal offense in Pakistani law.  Many cases of rape in police custody have also been reported.  According to Report of the Commission of Inquiry for Women (1997), 70 percent of women in police stations were subjected to sexual and physical violence.

Trafficking of women is on the rise in Pakistan. Foreign women from Afghanistan, Bangladesh, and Myanmar are brought to Pakistan and sold.

Dowry abuse is the cause of many cases of bride burning in Pakistan. The wife is typically doused with kerosene, gasoline, or other flammable liquid, and set alight, leading to death by fire.  In some cases, accidents are engineered (such as the tampering of a kitchen stove to cause victim's death) or the victims are set ablaze, claimed to be yet another accident or suicide. According to a 1999 report, of the sixty “bride-burning” cases that made it to the prosecution stage (though 1,600 cases were reported), only two resulted in convictions.  However, dowry abuse cases are low after 2001.

Domestic violence is not explicitly prohibited in Pakistani domestic law and most acts of domestic violence are encompassed by the Qisas and Diyat Ordinance.  The police and judges often tend to treat domestic violence as a non-criminal, private or family matter, or an issue for civil courts, rather than criminal courts.

A 1987 study conducted by the Women's Division and another study by the Human Rights Commission of Pakistan in 1996 suggested that domestic violence takes place in approximately 80 percent of the households in the country.  Domestic violence occurs in forms of beatings, sexual violence or torture, mutilation, acid attacks and burning the victim alive.

Acid throwing is a form of violent assault.  Perpetrators of these attacks throw acid at their victims (usually at their faces), burning them, and damaging skin tissue, often exposing and sometimes dissolving the bones.  The consequences of these attacks include blindness and permanent scarring of the face and body.  These attacks are common in Cambodia, Afghanistan, India, Bangladesh, and Pakistan.  According to Taru Bahl and M.H. Syed, 80% of victims of these acid attacks are female, and almost 40% are under 18 years of age.  Women in the Islamic Fundamentalist parts of Pakistan, such as the northern reaches around the Swat Valley, who do not cover their faces risk being attacked.  The theory is that if the women won’t hide their alluring faces, then they should be made too ugly to be alluring to men.

Marriage and divorce issues:  Often, inter-caste marriages in Pakistan are met with violence against the women in the families involved.  Women from low Pakistani castes who try to get an education are looked down upon and sometimes attacked, the case of Ghazala Shaheen being the most infamous one which prompted international outcry.

The average age of women for marriage has increased from 16.9 years in 1951 to 22.5 years in 2005.  A majority of women are married to their close relatives, i.e., first and second cousins.  Only 37 percent of married women are not related to their spouses before marriage.  The divorce rate in Pakistan is extremely low due to the social stigma attached to it.

Women who seek a divorce are often victims of honor killings.  One example is the high profile case of Samia Sarwar who was murdered in her lawyer's office on April 6, 1999 by a hitman hired by her family.  She was seeking a divorce from her estranged, abusive husband, which was deemed as dishonorable by her family.  Due to Samia's father being a prominent figure in the community, the police charged Samia's lawyers, Hina Jilani and Asma Jahangir, with kidnapping his daughter.  Samia's father additionally demanded that Hina Jilani and Asma Jahangir be dealt with in accordance with tribal and Islamic law and be arrested for misleading women in Pakistan and contributing to the country’s bad image abroad.  Several people belonging to religious organizations issued fatwas against both female lawyers and promised to pay rewards to anyone who would kill them.

Health:  The health indicators of women in Pakistan are among the worst in the world. Intra-household bias in food distribution leads to nutritional deficiencies among female children.  Early marriages of girls, excessive childbearing, lack of control over their own bodies, and a high level of illiteracy adversely affect women's health.  More than 40 percent of the total female population are anemic.

According to 1998 figures, the female infant mortality rate was higher than that of male children.  The maternal mortality rate is also high, as only 20 percent of women are assisted by a trained provider during delivery.  Only nine percent of the women used contraceptives in 1985, however this figure has increased substantially.

Women are at a higher risk of contracting HIV-AIDS and other sexually transmitted diseases (STDs) because of male dominance in sex relations and lack of access to information.

The sex ratio in Pakistan is somewhat unbalanced with 1.05 men per 1 female.  This phenomenon is attributable to male-favored sex ratio at birth (preference for sons).  In the urban areas, the sex ratio is still lower, which could be attributed to a large male out-migration from rural to urban areas.  The conservative Muslim families also refuse to give strangers any information about females in their household.  This has been a major problem for census officials in Pakistan and also in Afghanistan.

Eve teasing is a euphemism used in India and sometimes Pakistan, Bangladesh and Nepal for public sexual harassment, street harassment or molestation of women by men, with Eve being a reference to the biblical Eve.  Women, especially Westerners, who dress immodestly face this annoying prank.

Dr. Noman, explained to participants that they could have equal rights in this society if they know how to get them and stand for them. She explained the protection laws which are recently implemented by the government of Pakistan and which encourage women to speak about their rights and violence against them.  She said that women are very important to this society.  Her lecture was much appreciated by all participants and at the end of the seminar all participants had a nice lunch together arranged by HDO. 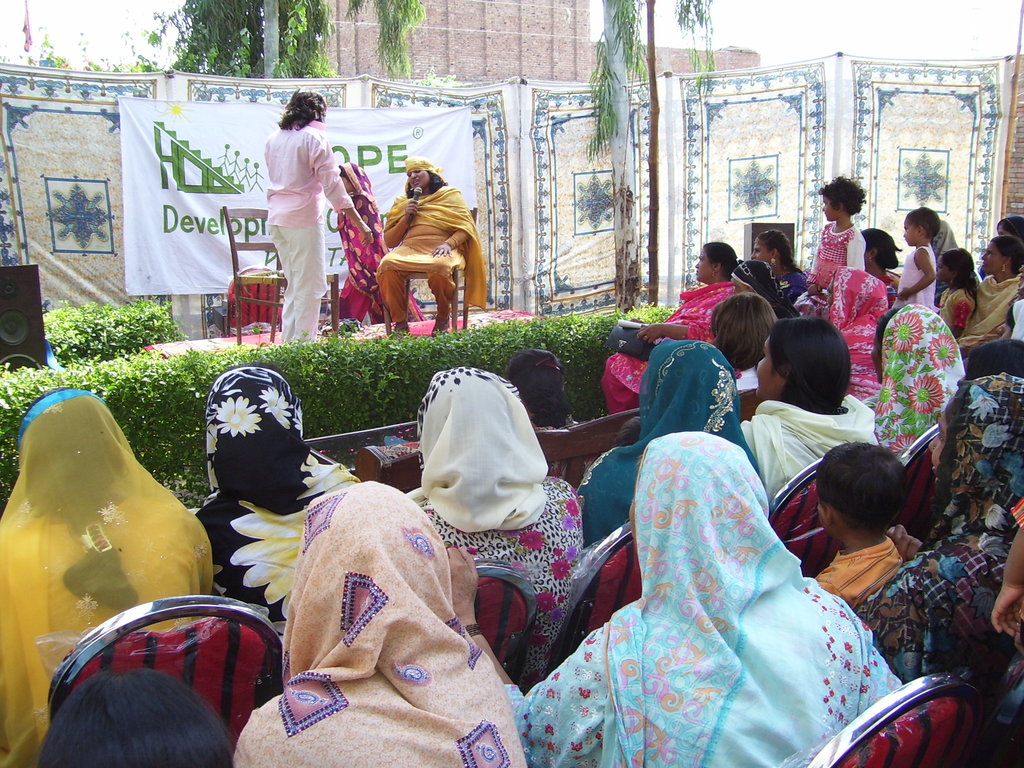