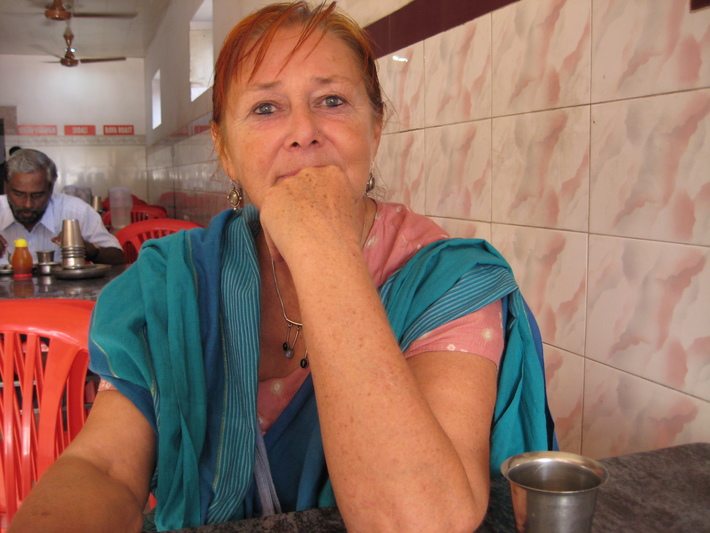 So what is it?
unconsciousness

More
Not knowing where the answer lies

More about me
That is who I really am - that's been shown to me by my Master Prem Rawat. I like to tell others what I've found after searching for so long for true happiness. 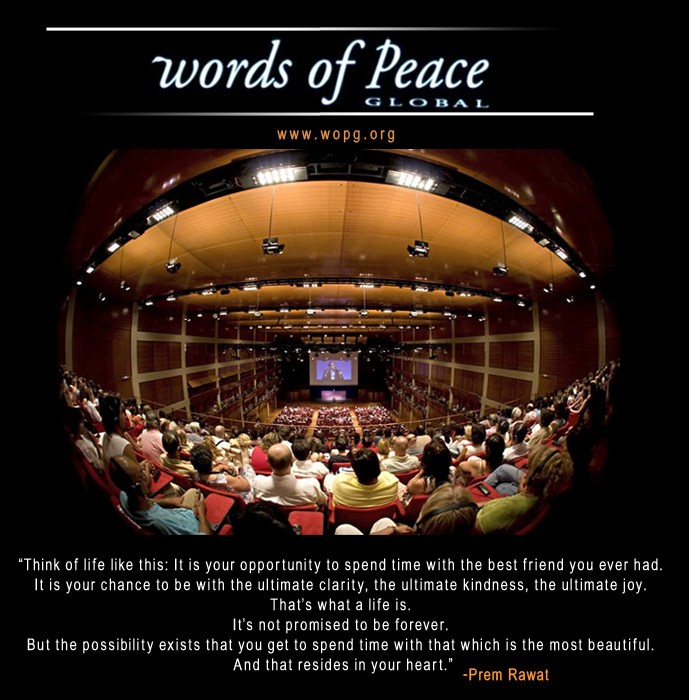 There is growing evidence that Prem Rawat has become a favorite with Brazilian television viewers who listen to his message on Words of Peace. His efforts to help individuals find peace have been widely recognized.
After Words of Peace was launched in the city of São Paulo, it quickly spread to other cities throughout the states of São Paulo and Rio de Janeiro. It currently airs in Porto Alegre, Florianopolis, Vitoria, Brasília, Belo Horizonte, Salvador, and Belem, as well as many other major Brazilian cities.

With the support of the Association of Community TV Channels and others, Words of Peace is estimated to have at least two million viewers, and the number of stations interested in it is growing steadily. By September 2009, all four community TV channels in the state of São Paulo will be airing Words of Peace once a week.

I was listening today to a dvd of what Prem Rawat says. I quote:
"Peace is not something you can merely talk about. Peace is not a placard on a wall. Peace is not something that you can just stick somewhere and say 'Yea, there it is and its a nice thing to have and lets talk about peace and hold up two fingers.' and that's Peace. Peace has to be felt - not once, not twice, not three times but every day, every moment and it's possible to feel it." > This meant something to me as this is… Continue

Dear Friend
May you have all the joy your heart can hold, All the smiles a day can bring, All the blessings a life can unfold, May you have Gods best in everything. Wishing u a Happy Birthday !!! 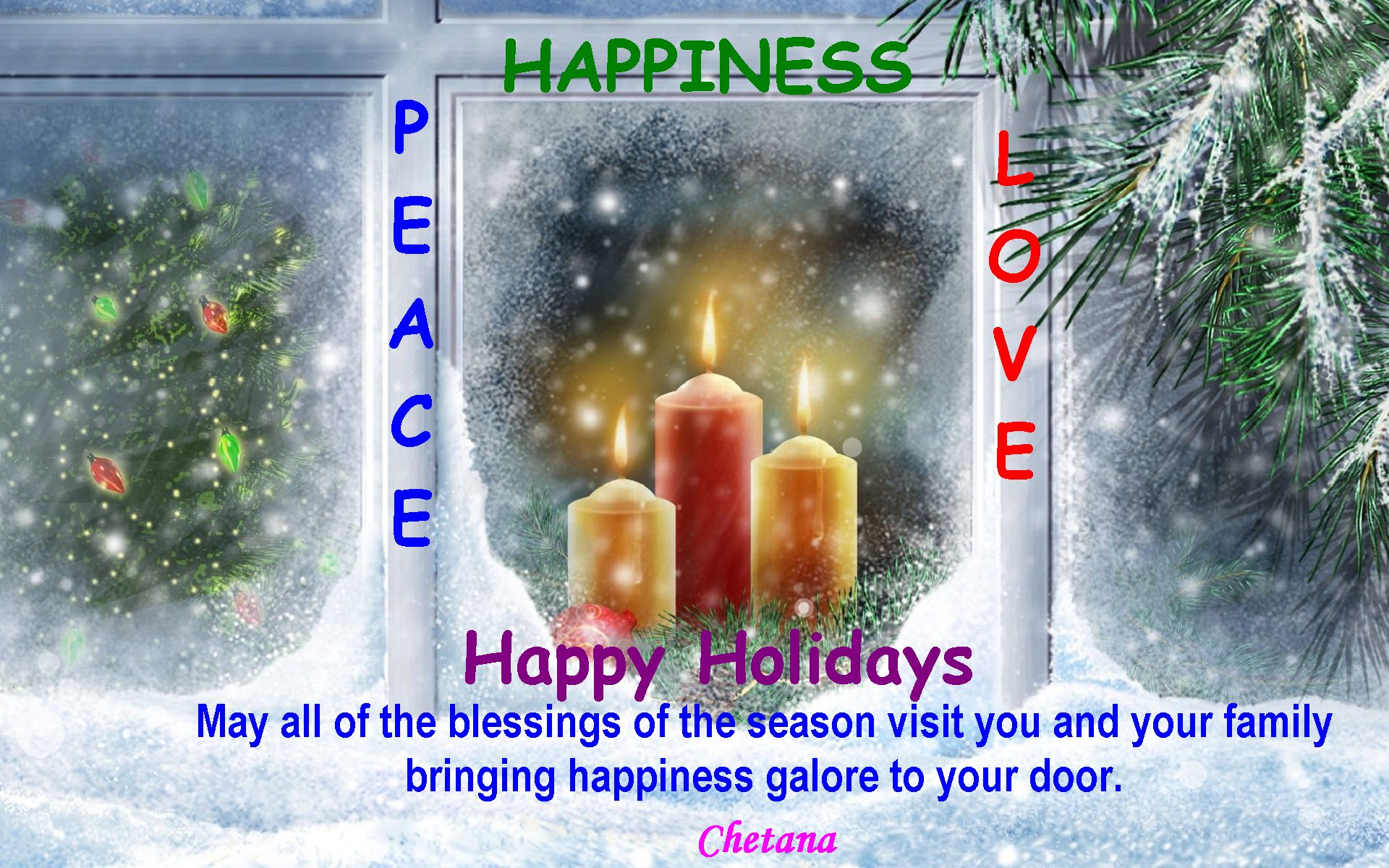 GLAD TO MET YOU ,
KEEP IN TOUCH,
LOVE,PEACE UPON YOU
KISSES..
MODY.

Krishnakumar Sreekandath said…
Hi Caz,
Thanks for the friend add, comment and the susequent messege. The reason why your comment did not appear under my profile was because of my opting for the provision of checking the comments and approving before posting them. Your comment is now posted. I look forward to communicating with you from now on for our mutual benefit. Take care!
Cheers,
Kris

Lynn Shedler said…
17/08/09
DEAR CAZ: One thing I forget to tell you is about the Bears we have in Canada!! Bears come down from way up north because they are hungry. They can be seen looting big garbage bins in the Muskoka Area (thats common - because it is "Cottage country" and there is no garbage pick up only the big bins & there big)!! You have to take your garbage there & run like hell to your car. They don't bother the Cottages and some of these Cottages are worth a fortune and all year round
places; because the owners never leave anything out and have
high fences. Goldie Hawn and Kurt Russell have just a place like that (a Mansion actually) Their fences even have barbed wired to keep people out!!!! lol But Bears are are a problem in many places. The "Game Warden's" shoot them with tranqulizer guns and they taken by truck to where they should be!! They are usually just after food and it rare that they attack people but has been known to happen!! A very tragic story is about an olympic athalete doing training on Base Borden (an army base not far from where I live)!!! Now, that place has high fences & barbed wire and their are soldiers always around. How this Bear got in is beyond me but she had something like an iPod (they weren't invented yet) - but the Bear came up from behind her and she didn't hear and it clawed her to death - well some soldier heard her screams and ran over and shot the bear - dead. She was so bardly mauled she didn't survive. Apparently, there was a whole in the fence and the Bear got in that way! The investigators asked the soldiers WHO made the hole. The whole Base was on lock down and the fences made of some kind of metal that bolt cutters could even cut through were put up. The fact is in Canada we are all told to "Freeze" if you see a Bear and it may sniff you But will usually 99% of the time walk away. Beause she was jogging and had the stupid music on - the bear attacked. There have been less attcaks since "That warning was issued and about the dead jogger came out" !!! And that is a true story. Bears are very rare in my City even in the forests like "Scouts Valley" but we do get the odd Moose and they are harmless if you don't disturbe them. The Police won't shoot they just call the Humane Society for wild Animals and they either ship them off up North or watch where it goes - because this moose walked through the main part of the City to the Lake (Traffic was halted by the Police) and into the water it went swam off to the other side of the Lake (this is the Small Lake)! Everybody was stunnded believe me. Whatever he was looking for he didn't find here!!!!
Now, I'll probably see a bear - I'll let you know if I do or if I'm unfrozen......
PEACE AND LOVE FROM YOUR FRIEND: LYNN SHEDLER

Lynn Shedler said…
DEAR CAZ: The picture's are fantastic. Have you ever been to Tibet - I've heard it is beautiful there except for the fighting right now. You're not from there (Manai), I mean are you? All the places you mentioned I recognize from other people being there. Where would you travel to in the winter? The forest is certainly lovely with the rocks and it's trees; ( is a beautiful picture
for sure). I'll write more tomorrow - it's very late here and I'm
so tired. So; Good night from Orillia, ONTARIO, CANADA!!
PEACE & LOVE FROM: LYNN SHEDLER

Lynn Shedler said…
DEAR CAZ: I am so sorry that you are not feeling very well!! I will understand about the "Gap" in not writting - so I'll wait for you to write for you to write to me; O.K. Manali is in India? I tried to find it one the "map" and couldn't find it? I tryed Brazil and Europe
and no luck. Now I will try there. I am trying to learn the world from where everybodies lives - It is facinating (To me anyway)!!
I love the forests here in Canada (and we have lots of them -
believe me). To walk through and no sound except some birds
and our National Flower - the Trillium grow everywhere in the forests - hundreds of them (beautiful wite flower - which are illeagal to pick). Every path takes you to a different beautiful
Part of the Park of the forest - that is for every one to go through. And it is huge and you have to be care full not to get
lost. I did once and a couple came by and I told them I was lost - so they said follow us. I did and the took me out, I hugged
them both and said thank you....I told them: "Sometimes I get lost in my own Neibourhood!!" They laughed at that and we said
are goos-byes! You are right about the Past being gone and to
concentrate on the present and future. To feel that joy is marvelous - inside of me - I tried it and It Was Easy.
My PRAYERS will be with you and I hope you find a solutoin
to why you are 'ill'. JUST GET WELL!!!
If your good I'll send you a Pizza.........
PEACE & LOVE FROM YOUR CRAZY FRIEND: LYNN SHEDLER

Mingmar Tsering Lama said…
hi friend...glad to hear from you.It's really interesting what u do and how long you are gonna stay in Manali?Are you planning to visit Nepal.?Keep up the good work.....i'm sending you my good wishes and huge hug........I'm 29..how about you?take care.......

BAIJU said…
THAT IS NICE, I LOVE SINGAPORE VERY MUCH. RIGHT NOW I AM IN KERALA FOR A VOCATION. PLS INTRODUCE YOUR FRIEND I CAN MEET THEM. YES YOU GOT VERY PROFESSIONAL OUT LOOK OF KERALA. I ADMIRE YOU FOR THAT. BUT THE SCENE IS MORE VERSE NOW. EVERY ONE HOUR. ONE GIRL OR CHILD MISSING OR DEAD