The Tomb of Sennedjem at Deir El Medina ,LUXOR

Sennedjem and his wife lyneferti from tomb wall Sennedjem was a tomb worker. He lived with his wife Iyneferti in a house on the southwest corner of the village. Like others in the village, he built a tomb in the hillside nearby

The tombs were dug underneath small mortuary chapels, and lined with mud brick. They were in the shape of a semi circular vault, and all their surfaces were plastered and decorated. As these were private tombs there was no formula for what must go on the walls, therefore the decoration was often personal and varied as to individual taste. The Tomb of Sennedjem has many religious scenes. Cartoon showing coffin being dragged on sledge to tomb with pyramid on top
Nefertiti

We had not expected to film the tomb. It was the day of the holiday ending Ramadan, and we had some difficulty persuading our guide to get us across the river as the car ferry was closed. In the end, he took us across on the local ferry and arranged for one of the drivers on the other side to take us around. As he arranged for the fees to the other driver (because we had already paid in advance for the day), we had a limited time, and quite a few sights on my list.

When we visited the tomb, we had the still camera and the video camera with us, but no camera permit. The tomb guide saw our cameras and offered us the opportunity to film, which we did hurriedly. The time one is allowed to stay in a tomb is limited because of the potential damage to the tomb from the moisture in the breath of visitors, and other visitors were waiting above for their turn.

Below is a diagram of the tomb with several stills taken from the video. The still shots are color enhanced to give you the best look at the details. Click the "thumbnail" to see the full picture. 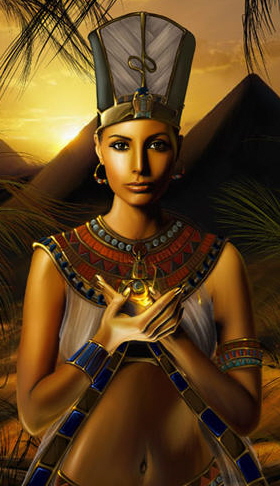 Nefertiti definitely stands out as one of the most beautiful and entrancing women of all times. Everything ever written on her sums her beauty as extraordinarily regal, aristocratic and enigmantic. Her gaze was magnetic and proud; she had an air that commanded admiration and total enrapture
Namaste

Permalink Reply by mody Ibrahem on October 20, 2009 at 9:31pm
yes this true Clicia ,she is the most beautiful queen of the egyptian history
thank you
Namaste..