One of the best known and most respected Zen masters in the world today, poet, and peace and human rights activist, Thich Nhat Hanh (called Thây by his students) has led an extraordinary life. Born in central Vietnam in 1926 he joined the monkshood at the age of sixteen. The Vietnam War confronted the monasteries with the question of whether to adhere to the contemplative life and remain meditating in the monasteries, or to help the villagers suffering under bombings and other devastation of the war. Nhat Hanh was one of those who chose to do both, helping to found the "engaged Buddhism" movement. His life has since been dedicated to the work of inner transformation for the benefit of individuals and society. In Saigon in the early 60s, Thich Nhat Hanh founded the School of Youth Social Service, a grass-roots relief organization that rebuilt bombed villages, set up schools and medical centers, resettled homeless families, and organized agricultural cooperatives. Rallying some 10,000 student volunteers, the SYSS based its work on the Buddhist principles of non-violence and compassionate action. Despite government denunciation of his activity, Nhat Hanh also founded a Buddhist University, a publishing house, and an influential peace activist magazine in Vietnam.

After visiting the U.S. and Europe in 1966 on a peace mission, he was banned from returning to Vietnam in 1966. On subsequent travels to the U.S., he made the case for peace to federal and Pentagon officials including Robert McNamara. He may have changed the course of U.S. history when he persuaded Martin Luther King, Jr. to oppose the Vietnam War publicly, and so helped to galvanize the peace movement. The following year, King nominated him for the Nobel Peace Prize. Subsequently, Nhat Hanh led the Buddhist delegation to the Paris Peace Talks.

In 1982 he founded Plum Village, a Buddhist community in exile in France, where he continues his work to alleviate suffering of refugees, boat people, political prisoners, and hungry families in Vietnam and throughout the Third World. He has also received recognition for his work with Vietnam veterans, meditation retreats, and his prolific writings on meditation, mindfulness, and peace. He has published some 85 titles of accessible poems, prose, and prayers, with more than 40 in English, including the best selling Call Me by My True Names, Peace Is Every Step, Being Peace, Touching Peace, Living Buddha Living Christ, Teachings on Love, The Path of Emancipation, and Anger. In September 2001, just a few days after the suicide terrorist attacks on the World Trade Center, he addressed the issues of non-violence and forgiveness in a memorable speech at Riverside Church in New York City. In September of 2003 he addressed members of the US Congress, leading them through a two-day retreat.

Thich Nhat Hanh continues to live in Plum Village in the meditation community he founded, where he teaches, writes, and gardens; and he leads retreats worldwide on "the art of mindful living." 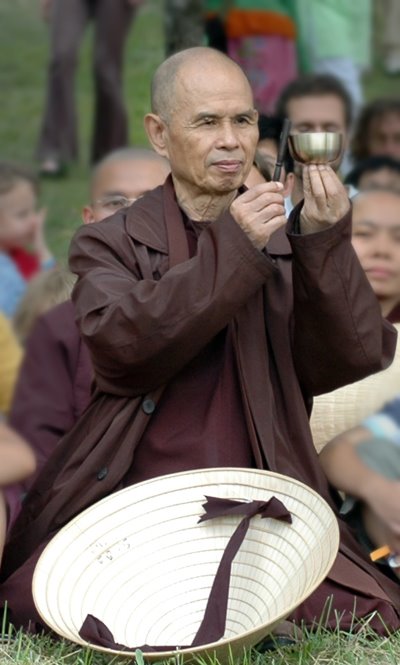 Thich Nhat Hanh, Nothing to do, Nowhere to go - Waking up to who you are, Parallax Press, 2007

Permalink Reply by Vicky F. on May 18, 2009 at 7:22pm
THICH NHAT HANH:
The practice of peace and reconciliation is one of the most vital and artistic of human actions. One day, a Zen student came to his master and asked him a very important question about the ultimate reality. He had been there for three years, but he believed that his master had not taught him the best things concerning meditation. So he presented himself that morning to the master, hoping that he would teach him very important things. The master pointed to a cypress tree in the front yard and asked the student whether he had seen it or not. That was all. The master refused to say another word. I think perhaps the student had gone by that tree many times a day for many years but he had not had a chance to really look at the tree. Therefore, his master wanted him to go back to the tree and look at it. And that was his deepest teaching. I don't know whether the student got the message, but when I read the story, I got the message. If we do not go back to ourselves in the present moment, it will be impossible for us to meet anything, including a flower or a tree.

[...] To go back to yourself, to be yourself again, in order to be in the present moment, in order for the encounter with the flower to be possible; that flower and [...] that cypress tree, they are life, they represent life. And if we cannot meet them, we cannot encounter them in a direct way, we miss life. "There are those who are so discouraged that they no longer have the courage to love. They suffer a great deal just because they made an attempt to love and failed. The wounds within them are so deep that it makes them afraid to try again. We are aware of the presence of these people among us, all around us. We have to bring them the message that love is possible. Our world desperately needs love". Permalink Reply by Sandra Reis on November 11, 2009 at 5:53pm
When you calm your body and your emotions, teaches Zen master Thich Nhat Hanh, you restore yourself, and you restore peace to the world around you. On mindful movements, this renowned teacher of mindfulness meditation guides you through a series of gentle exercises created specifically to cultivate a joyful awareness of the body and breath.