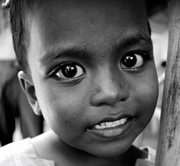 Poverty is one of the major obstacles to peace. Here we fight poverty.

International Day for the Eradication of Poverty

Poverty is not just a matter of subsistence. Poverty encompasses the absence of opportunity to partake of the very things we take for granted: food, housing, education, training, work opportunities, and most severely, it denies the right to a fruitful life. Poverty drives individuals to extremes just so as to survive.Others lose hope, faith and will.


Despair drives parents to sell children, teenagers sell their bodies for a pittance and societies crumble incrementally under the pressure of living on nothing.


Values and norms lose meaning as the fight to live through hunger and a spot in a drain pipe for sleep out of the rain, fighting over that extra sniff of glue are all that some children learn about being disposable and invisible to the greater world


And what do we lose in the process? Human potential. We lose a child’s discovery of their own mind, a child who through play and exploration would otherwise uncover the wealth of their own talent and what they could possibly contribute to the world


As you brush off a child who begs to wash your car windows as you wait for a red light, or a kid asks to take your shopping trolley, don’t just imagine it being your own child, but see the scientist, the musician, the economist, the community leader, the teacher, whose potential dies in your looking the other way……

The choice is yours… and yours…and yours And mine! We can make poverty history if we want it to be.

There is this idea that poverty is something that born and bred in developing nations: media and commerce have created the illusion of a great divide… and it is often relegated to a developmental one.


Truth is Poverty is spawned in your own home. It starts in the mind. It grows roots in the soil of apathy and it spreads like a cancer among the backstreets of everything you and I pretend not to see. It flourishes among the garbage bags of everything we take for granted: running water, a bed, warmth, family, holidays, birthday wishes, even a simple smile which lets you know someone has SEEN you, acknowledge your existence…


Poverty is not just a matter of money. Poverty is what comes from living beyond the realm of those in need of a helping hand.


Give, so a girl can development her self confidence and become self-reliant.

Give, so a young man need not prostitute himself to foreign holiday makers,

Give, so that a man need not traffic his child for 50dollars.

Give a Damn… it goes farther than just a Dime …. And BE the difference in their lives and your own.

Poverty like illness knows no boundaries. Wealth does not protect one from it and poverty itself does not make you immune to its impact.


With the current tumbling of the world’s financial markets, the loss of billions around the world offers all of us an opportune moment of reflection. The first Wall Street Crash sent the world into an economic nightmare. These days governments rally together at the speed of light in a financial rescue mission….


Those stuck in poverty remain stuck in the mud or rambling knee deep in disease infected refuse landfills, which is home to seagulls and homeless children: it feeds a pittance to some anonymous stricken family in the back streets of Bogota, children scramble bottles together for enough small change to kill the cold off their skin for a night.


Poverty Day: Take part! Care enough so there does not have to be one next year!

Create opportunities for Trade rather than Aid.

some pictures courtesy of flickr.com

Create a new home for vulnerable children in Limbe

Empower the poor then there will be no poverty

There Is A Cure For Poverty, and It's Guaranteed

You need to be a member of Eradication of Poverty to add comments!

And we must meet the challenge

Comment by maurie j. campanella on October 6, 2011 at 7:22pm
C-Lipid Support is a natural supplement that supports healthy levels of cholesterol
. Over 1/3 of the population is experiencing cholesterol challenges. Drugs work to reduce cholesterol levels, but with serious side effects in many cases
.
With C-Lipid support Vitamark offers a natural approach that is amazing. It contains 6 natural ingredients that can make an exciting difference in managing your cholesterol--niacin, guggul lipids, red yeast rice, beta-sitosterol, beta glucan and soy isoflavones.
http://youtu.be/Ha6_dlUpXxY
Customer Shop Site:
http://theDiabeticBOOGEYMAN.shopvitamark.com

Comment by GOPI KANTA GHOSH on May 20, 2011 at 4:11pm
We must together create environment forcing leaders to act...

I finally gave it my all. I sold my home, and got all I own into four suitcases. Went to help give free energy to non profit institutions, got fined and deported. I lived with the poverty and saw how in the heat of the day, they danced in rain, the same rain that would flood their homes. Now I sit with nothing, but the satisfaction I did help some but not many. I am 54 and no where to go. No one wants an old man. I still would not change anything I have done. Peace, Love and Light, Van