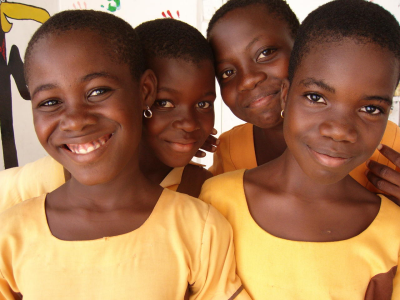 Kiddies corner in Accra sounds like the title of a popular children’s TV show; something one could happily watch with toddlers on a Saturday morning, learning ABC songs about foreign and faraway places. It sounds as it always does: a freely expressive haven of childish imagination.

For most of us it would be hard to imagine it could be anything else, unless one has encountered iPeace member Liz Busch, one very remarkable English grandmother. Her creation is this special Kids’ Corner, which is very much an oasis for the imagination of children, yet it as far from the magical illusion of television as it can get. Accra, for those who may not be aware, is the Capital of Ghana. Its setting is among the most beautiful of African landscapes and it is home to some of life’s harshest realities, especially for its children.

Her story is exemplary of remarkable strength, fortitude and courage in the face of the worst kind of personal tragedy and she is a lesson to each of us.
A car accident left her critically injured and cost the lives of her two sons and her foster child. She spent a very long time recovering both mentally and physically.

Eventually she decided to fulfill a lifetime's dream to travel to Ghana and do something to help the children there. She arrived in February 2006 as a volunteer teacher with the intention of staying for six weeks. Discovering the appalling conditions in which the children learn, i.e. almost no books at school or home, no exercise books or paper, often even forced into sharing a pen, she decided to return and open an Educational Centre and Library. She was back two months later and has been running the Child Development Project - Ghana in Hohoe, in the Volta Region, ever since. (www.cdp-ghana.com)

She and those who work there affectionately call the Centre 'Kiddies’ Corner'. It is a remarkable oasis for the 3,000 local village children who lead very difficult lives. Some are too poor to go to school. They often are forced to have to work from 5 a.m. - 9 p.m. to help support their families. At the Centre they are assured of a kind word, a book to read, paper and coloured pencils for a few minutes relaxation, before going back to on the street; selling old clothes or fruit, just so they earn barely enough to fed themselves.

Children are raised under severe conditions and are seldom praised, mostly reprimanded and treated abusively by parents so as not to encourage ‘idleness’. They are unaccustomed to encouragement and open displays of approval and affection. The centre provides a cherished respite from the harsh routine of their day. At the Centre, they relish educational, sporting and recreational materials and facilities. Equally important, the centre is a sanctuary where children come to learn in a peaceful, friendly, supportive and relaxed environment.

‘Kids' Corner’ has now flourished and grown into the main focal point of the children of Hohoe, with a membership of over 3,500 children, aged from 5 - 16, who regularly visit our after-school Education Centre.The Centre houses a library of second-hand books donated from the U.K. and also provides educational games, toys and puzzles.

Saturday mornings are dedicated to sports and games: footballs, sports clothing and boots, as well as skipping ropes, basketball facilities are their simple treasures. Other weekend favourites include drawing, writing, spelling and dancing competitions.