Abhimanyu and the Battle of Kurukshetra 
Abhimanyu is a key personality featured in the epic Mahabharata. The son of Arjuna and Subhadra, half-sister of Lord Krishna, Abhimanyu is a partial incarnation of Chandra. An unparalleled archer, he was considered equal to his father in prowess with the bow and arrow.

As an unborn child in his mother's womb, Abhimanyu learned the knowledge of entering the deadly and virtually impenetrable Chakravyuha from Arjuna. The Mahabharata explains that from the womb, Abhimanyu overheard Arjuna talking about this with his mother Subhadra. Arjuna explained to Subhadra in detail the technique of attacking and escaping from various vyoohs (an array of army formation) such as Makaravyoha, Kurmavyooha, Sarpavyuha, etc. After explaining all the vyoohs, he explained about the technique of cracking Chakravyuha, and entering it. When he was about to explain how to exit from the Chakravyuha, he realises that Subadra was asleep and stopped explaining about the Chakravyuha further. In return, the baby Abhimanyu in the womb did not get a chance to learn how to come out of it. 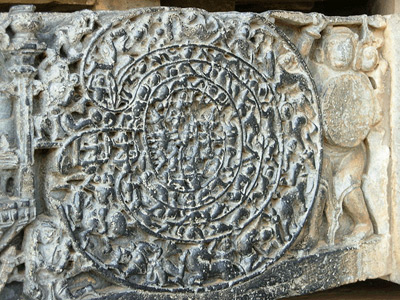 
Abhimanyu spent his childhood in Dwaraka, his mother's city. He was trained by Pradyumna, the son of Sri Krishna, and by his great warrior father Arjuna, and brought up under the guidance of Lord Krishna. His father arranged his marriage to Uttara, daughter of King Virata, to seal an alliance between the Pandavas and the royal family of Virata, in light of the forthcoming Kurukshetra War. The Pandavas had been hiding incognito through the final year of their exile, living without discovery in Virata's kingdom of Matsya.

Being the grandson of Lord Indra, god of mystical weapons and wars, Abhimanyu was a courageous and dashing warrior. Considered an equal to his father owing his prodigious feats, Abhimanyu was able to hold at bay great heroes like Drona, Karna, Duryodhana and Dushasana. He was praised for his audacious bravery and absolute loyalty to his father, his uncles and to their cause. Abhimanyu took part in the war of Mahabharat and killed important personalities such as Lakshman, the son of Duryodhana and Brihadbala, the King of Kosala, of the Ikshwaku dynasty. Abhimanyu and his Mother

On the 13th day of battle, the Kauravas challenged the Pandavas to break a circular battle formation, the Chakravyuha. The Pandavas accepted the challenge, since the knowledge of how to defeat such a formation was known to Krishna and Arjuna. However, on that day, Krishna and Arjuna were dragged into fighting a war on another front with the Samsaptakas. Since the Pandavas had already accepted the challenge, they had no choice but to attempt to use the young lad Abhimanyu, who had knowledge on how to break into the formation, but none whatsoever regarding how to break out of it. To make sure that Abhimanyu did not get trapped in this endeavour, the remaining Pandava brothers decided that they and their allies would also break into the formation along with Abhimanyu and assist the boy in breaking out of it. It is important to note that the plan was hatched well after Arjuna and Krishna had been distracted away by the Samsaptaka army led by Susarma.

Using his knowledge of the Chakravyuvha, Abhimanyu successfully broke into the formation. The Pandava brothers and allies attempted to follow him inside the formation, but they were effectively cut off by Jayadratha, the Sindhu king, who made use of a boon from Shiva to that enabled him to hold off all Pandavas except Arjuna for a day. Abhimanyu was left to fend for himself against the entire Kaurava army.

Abhimanyu commanded his charioteer to lead his chariot towards Drona. The charioteer, thinking it was not wise to do so, raised objections and requested the sixteen-year-old to take time to think about it before he began the battle. He pointed out that Abhimanyu had grown up amidst great love and comforts and he was not a master of the battle arts as Drona was. Laughing aloud, Abhimanyu said to his charioteer: “What is this Drona or even the entire world of kshatriyas to me? I can fight Indra himself, mounted on his Airavata, along with all the gods! Why, I can fight in a battle even Lord Rudra himself, to whom the entire world of beings pays homage! This battle that I am going to wage today does not bewilder me in the least. This entire army of enemies is not equal to one sixteenth of my power. Why, even if I find in front of me in the battlefield my father Arjuna or my uncle himself, the mighty Vishnu who has conquered the whole universe, that wouldn’t frighten me.”

With no great joy in his mind, the charioteer took his master forward and Abhimanyu broke into the Chakravyuvha. In the mighty battle that followed, he slaughtered ordinary enemy warriors and mighty heroes alike. Abhimanyu fought valiantly, single-handedly slaying several warriors who came in his way including Duryodhana's son, Laxman. Among the others who were killed were Ashmaka’s son, Shalya younger brother, Shalya’s son Rukmaratha, Drighalochana, Kundavedhi, Sushena, Vasatiya, Kratha and numerous other great warriors. He wounded Karna and made him flee, making Dushshasana faint in the battlefield such that he had to be carried off by others.

Upon witnessing the death of his beloved son, Duryodhana was incensed and ordered the entire Kaurava force to attack Abhimanyu. Continually frustrated in attempts to pierce Abhimanyu's armor, Karna on Dronacharya's advice shattered Abhimanyu's bow by firing arrows from behind him. His chariot broke shortly after, the charioteer and horses were killed, and all his weapons were laid to waste. He attempted then to fight off the bow wielding warriors sitting on horses and elephants with a sword and using a chariot wheel as a shield. Dushasana's son engaged in fierce hand-to-hand combat with Abhimanyu. Ignoring all rules of war, the Kauravas all fought simultaneously with him. He held his own until his sword broke and the remaining chariot wheel shattered into pieces. Abhimanyu was killed shortly thereafter, when Dushasana's son crushed his skull with a mace. However, Abhimanyu killed him with his own mace before dying.

It is said that it was Abhimanyu's death that marked the end of the adherence to the Rules of War. Krishna cited the despicable manner in which Abhimanyu was killed to incite Arjuna to kill Karna. This, said Krishna, was a reason to kill Duryodhana. The Chakravyuha and Military Formation
Scene from the Mahabharata War, Belur, Halebid

Abhimanyu is often discussed in the context of his partial knowledge about Chakravyuha, which he knew how to penetrate, but not how to exit from. Similarly, Ashwatthama had partial knowledge in the context of Brahmastra. He knew how to invoke it, but did not know how to withdraw it. This contributed to his being cursed by Krishna during the end of Mahabharatha war. It was only Arjuna who had complete knowledge of both Chakravyuha (to break into and exit from it) and Brahmastra (to invoke it and withdraw it).

Abhimanyu was actually an incarnation of Kalayavan and was capable of killing Krishna at a later point. In this pastime, however, he had taken birth in a very good family, so Krishna was aware of this and being the guru of Abhimanyu (via Pradyumna) in Dwaraka, saw to it that Abhimanyu was ignorant about how to exit from Chakravyuha Hence, even though Abhimanyu wished to know how to exit from Chakravyuha, Krishna did not tell this secret, but instead wished that Abhimanyu seek that knowledge from Arjuna. Abhimanyu never got a chance, however, because he was in exile.

Abhimanyu was such a hero that none from the Kaurava side (except Bhisma) could kill him in one-on-one combat (dwandva yudha). Hence, the 13th day on the battlefield, when the Chakravyuha is launched by Dronacharya, he defeated all the Maharatis in one-on-one battle. Abhimanyu caused great losses to the Kaurva forces on that day. In retaliation, the Kaurava Maharatis merged together to kill him after making him weaponless. This was the only way in which Abhimanyu could attain moksha. Hence, he plays a very great role on the 13th day of the Mahabharata war.

In the case of Ashwatama, Dronacharya did not trust Ashwatama in the same way that he trusted Arjuna. Hence, he taught Ashwatama to only invoke Brahmastra, but not how to withdraw it. If an archer is aware of both the invocation and withdrawal of Brahmastra, then he can invoke it as many times as he wants. So to avoid Ashwatama from invoking Brahmastra multiple times, Dronacharya only gave partial knowledge about it. 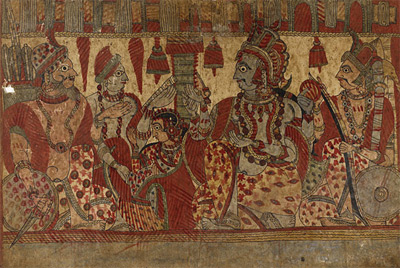 Meeting of Duryodhana and Vatsala’s Father

Aside from the battlefield stories, in which the history of Abhimanyu's activities is so bittersweet, the best-loved of his pastimes are those surrounding his marriage to Vatsala. Vatsala was a daughter of Balarama, who had great affection for Duryodana. Before the birth of Abhimanyu, he wanted his sister Subhadra to marry Duryodana, instead of Arjuna. Hence, Krishna, who was aware of this, saw to it that Arjuna abducted Subhadra and they got married. In the case of Abhimanyu, that same scenario repeated a generation later.

Lakshmana was the son of Duryodana, and Balarama wanted his daughter Vatsala to marry Lakshmana instead of Abhimanyu. Hence, Krishna advised Abhimanyu to seek help from Ghatothkacha to solve this problem. Ghatothkacha abducted Vatsala so that Abhimanyu could wed Vatsala.

In a folio of Sri Mahabharata from Paithan, Maharashtra, c. 1850, there is a series of excellent paintings which illustrate the pursuits of Abhimanyu in his efforts to marry Vatsala. The engagement, intrigue, abduction and wedding pastimes are nearly as epic as the battlefield activities. Subhadra Tells Abhimanyu that his Engagement to Vatsala has been Annulled 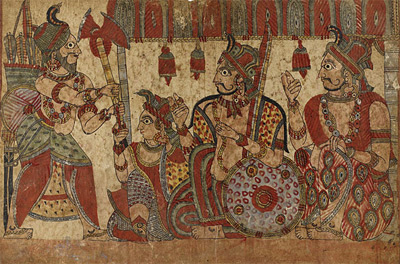 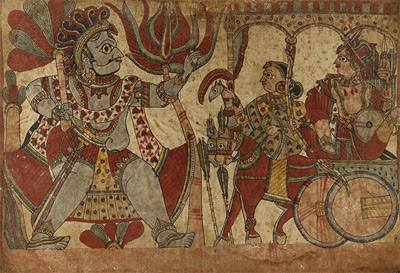 On the Road to Dwarka, Abhimanyu and Subhadra Meet Ghatotkacha 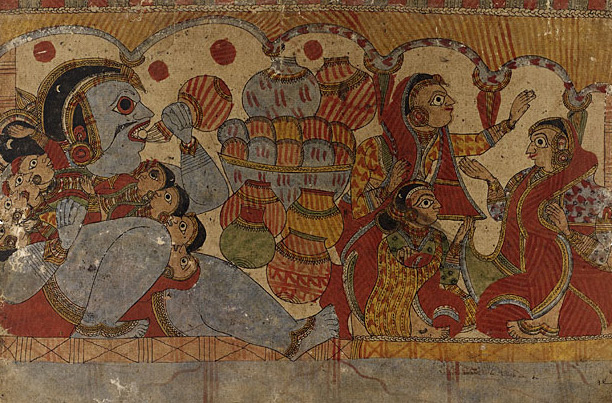 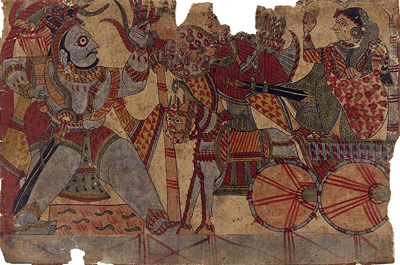 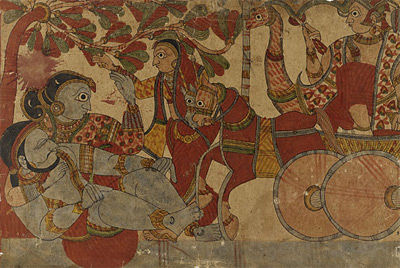 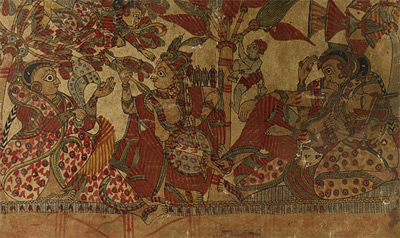 Vatsala and Abhimanyu being Blessed by Elders 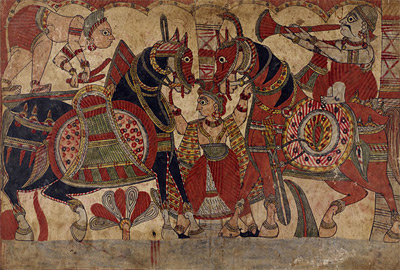 Drummer and Horn Player at the Marriage of Abhimanyu and Vatsala Blessing of the Groom and Bride with Ghatotkacha