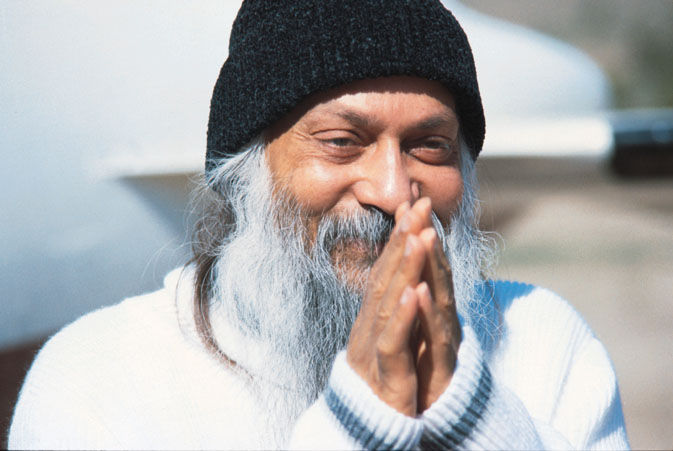 THERE ARE BARRIERS FOR THE REBEL-TO-COME. The most important barrier is that HE HAS TO GO AGAINST THE CROWD, and the crowd has all the POWER. The rebel is very vulnerable, as vulnerable as a rose flower. You can destroy it very easily; you can crucify a rebel without any difficulty.

But I am now feeling a tremendous certainty that THE REBEL IS GOING TO BE BORN -- PERHAPS HE IS ALREADY BORN. It will just take people A LITTLE TIME TO RECOGNIZE HIM; he is so new, he does not fit in any category. Hence, sometimes a gap is needed to create a category and to recognize him.

Why I am so certain? I am so certain because MAN HAS COME TO A CRISIS WHICH HE HAS NEVER ENCOUNTERED BEFORE. He has to CHOOSE EITHER FOR A NEW MAN OR FOR COMMITTING GLOBAL SUICIDE -- and I don't think that people are going to choose global suicide. That is my guarantee, that is my HOPE that the New Man is bound to arise.

THE DAYS OF THE OLD MAN ARE OVER. He has lived too long, almost posthumously. He should have been dead long before, but he has been dragging his corpse. Now his time is finished. He himself has created the situation in which ONLY THE NEW MAN, THE REBELLIOUS MAN -- rebelling against all religions, governments, establishments and vested interests -- CAN SURVIVE. He will rebel against all that has been keeping man blind, holding him a prisoner, forcing him to live in dark tunnels, never allowing him to know the beauties of life.

The old man has created such a situation, which was bound to happen; it was coming by and by... EACH WAR WAS BECOMING MORE AND MORE DANGEROUS.

All your great warriors, all your historical figures, all your so-called great men have brought death so close that now man has to choose. THERE IS NO OTHER ALTERNATIVE THAN A NEW MAN. The old man has erased himself out of existence.

THE REBEL WILL HAVE A NEW MORALITY -- not according to any commandments, BUT ACCORDING TO HIS CONSCIOUSNESS. He will have a new religiousness; HE WILL NOT BELONG TO ANY RELIGION, because that is absolutely stupid. Religiousness is a private and personal phenomenon. It is just like love, it cannot be organized. And the moment you organize truth or love, you kill them. Organization functions almost like POISON.

THE NEW MAN WILL NOT BE A CHRISTIAN OR A HINDU, A MOHAMMEDAN OR A BUDDHIST. He will simply be religious. Religiousness will be taken not as a belief, but as a way of life. A graceful way, a beautiful way, a responsible way -- a way full of consciousness and full of love, full of sharing, friendliness; and creating ONE WORLD WITHOUT ANY BOUNDARIES.