Burma Democratic Concern is equipped with participants who had political background and in depth knowledge of Burma issues. They have the firm determination to carry on doing until the democracy restore in Burma.

Burma crisis is international crisis as everyone is bond in humanity.

BURMA DEMOCRATIC CONCERN (BDC) values everyone's participation and welcome anyone who love justice, freedom and human rights and peace. We are doing the media campaign as part of our strategy for 2009.

We are compiling videos clips (3-5 minutes each) from Burma’s supporters from around the world who are talking about words of support for Burmese people. You can speak with your own languages or in English, French, Italian, Spanish, Portuguese, Russian, Chinese, Japanese, Arabic, German, Dutch or Burmese. But if you use other languages, please provide us with English translated script so as to publish in our web.

You can talk about words of support for Aung San Suu Kyi and Burmese people that we are with them, demanding United Nations Security Council to adopt binding resolution on Burma so as to take practical actions on Burma, demanding respective governments to pressure Burmese military junta to respect people’s will, to honour 1990 elections results in which people voted for Aung San Suu Kyi as their leader but regime still ignore to honour it, demanding to release all political prisoners, and demanding respective governments not to endorse junta’s 2010 elections game plan.

Your messages will be vitamins for Burmese people and it can also raise awareness about Burma crisis which has been happening for nearly half century. It is like forgotten crisis and Burmese people are suffering very tremendously. It will also send the message to United Nations that they must take practical action to solve Burma crisis and the governments around the world.

Together we can restore the democracy in Burma and build the better world.

WHAT YOU BELIEVE IS WHAT YOU ACHIEVE!

White Campaign for Justice in Burma

You need to be a member of Burma Democratic Concern to add comments!

Comment by Tree Thunderchild on January 23, 2009 at 12:42am
I have not read the news, I dont get a newspaper, nor have I seen TV in over a year.
Yet still voices echo against stone and concrete walls, voices that make no sound yet cry out in solitude.
Forced labor, imprisonment, furnaces in vain attempts to burn the proof of the truth of so many lives taken....
I cannot go to visit Burma as tourist...
I am a man of Peace. Would not the same fate befall me?!

I hear these voices, and wish those in isolation would also know,
they are not alone, I am with them.
Nothing is done behind closed doors that is not known to all that exists.
The tighter those doors are closed to keep out the eyes of the world,
the louder the voice becomes to the eyes of the total of all that is.
So what is thought to be hidden, balances, and shouts to that which created all.
No pain that is inflicted in isolated forests or locked cells,
goes unknown but the more hidden the more it shouts and is HEARD.

What things are being built of forced labors, that I may learn of them and not contribute to their gains? Pipelines and Palaces I will not support by buying nor visiting for the burden that was put on the people is to much to bear.
I bear witness ever single day to the suffering of innocents.
My prayers for them, are for myself, that I may some day know a day
of peace.

Comment by Tree Thunderchild on January 12, 2009 at 4:59am
There is not a day that goes by that Burma is not on my mind.
My heart and love to the people.
May the disease that effects the land be cured.
But you are not alone, I hold you!

Comment by Tree Thunderchild on November 30, 2008 at 5:53am
I do not remember the author of this but wish to share it.

If you love something,
set it free
If it comes back to you
it is yours
if not
it never was. 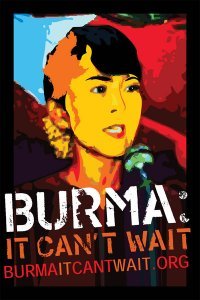 Comment by Tree Thunderchild on November 20, 2008 at 2:43am
Myo Thein, and David Calfia
You are both free to moderate and delete the post I just made, I apologize for not feeling peace when I said what I said, but even if removed, my words still stand.
I will not object if they are removed for the peace I was not holding, in the face of this injustace peace escapes my grasp, I wish no harm even to the Junta, I wish only for peace,
but these voice scream across time and space, in their name and many others,
I was brought to this world, by their voices which still echo within my soul.
This is your site, your discussion, please use your own discretion if you wish to remove my post for the power of it. I will not be offended, nor do I wish to offend others.
Peace.

May peace reign in Burma,
These voices are heard,
beyond this world.
There is one, who still does not listen,
that the planet itself, does not approve of his actions.
Shall the sky fall upon the land in a flood of tears?
Shall the ground be made to tremble beneath his feet?
Will he STILL not listen?
He must turn,
He must follow in the path of peace,
he has been so warned by the powers,
and still holds an iron heart?
It is not the will of the creator of all things,
that the destroyer, shall be destroyed,
but if he will not turn from this dark path,
he shall destroy himself.
Much has been done and said for him to listen,
to turn to the path of peace is what is preferred.
The Thunderchild

As millions of voices cry out
without media, without internet,
these voices have been HEARD
by that which created us all.
How is it then, that one man cannot listen?

Comment by Beverley Anne Jones on November 19, 2008 at 10:07pm
Hello Myo, its nice to see you here on iPeace. Im happy to be part of this group here.
Peace
Bev