Comment by ljiljana on December 25, 2009 at 12:33pm
Merry Christmas Michael and all people here!!! love your..kissssss 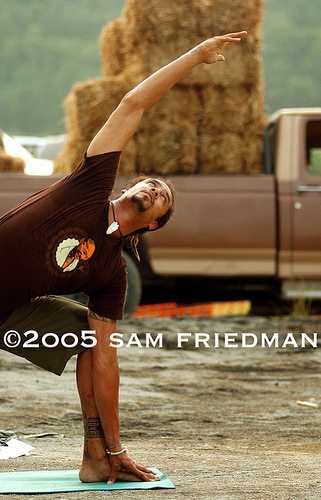 Thank you so much for share it!!
I always knew you were a lucky guy....LOL

Comment by Gordon J Millar ~ The Global We on September 18, 2009 at 5:29pm
I took this photo of Michael ~ June 30th @The Arches Glasgow ~ at the end of an incredible gig. I waited till he looked at me directly, then I shook his hand and said " Peace brother!"... what an amazing night!

THE RUDE BOY'S BACK ONSTAGE!!!

Well after being in the hospital for six days following a ruptured appendix surgery and being at home for a week following that, I got back on stage at the House of Blues in New Orleans and played music once again. I felt a bit shaky going into it, not having jumped or used my abdominal muscles to sing at all for two weeks, so I wasn't sure if my body remembered how to do it. I did a short Yoga practice before the show and my first headstand since the surgery which gave me a little confidence. My bandmates were really on point and having their support over the past two weeks of layoff and then onstage last night was HUGE! Thanks guys (and you too, Cherine)! They played better than before the layoff (maybe we need more time off? LOL).

Anyway, once the adrenaline kicked in I was fine onstage. Only problem was my guitar sits right up against my incision from the surgery and kept bumping it (ouch!) so I adapted by playing my guitar on the side of my body. A bit awkward, but perhaps it's a style that will catch on. I felt like I had about 75% of my normal energy and look forward to getting back in tour shape in the next few weeks.

I want to thank everyone who packed the House of Blues last night and were so warm welcoming me back before and after the gig. Also thanks once again to everyone who sent letters, E-mails, flowers, teddy bears, ointments and prayers for my healing. I've said it before, we have the best fans an artist could ever dream of having!!! I'm grateful to be alive and grateful to be sharing music again!

Thanks, from Nashville, Michael Franti