Lords of the material universe
The first signs were auspicious. At Brisbane airport, waiting to catch the flight out to LA, we bumped into Elizabeth Thorpe and Debbie Lee. Elizabeth and her partner Ray, proprietors of Happy High Herbs, were the principal sponsors of Rainbow Dreaming and Lee, artist and designer, is an old connection from Nimbin. Elizabeth and Lee were headed for USA to open Happy High’s first US store, in Arizona. And Hans and myself were headed for New York, bringing with us the stories and pictures of life in the rainbow region.
From the plane, the New York nightscape glowed and flickered like some gigantic circuit board. “The lords of the material universe have nice real estate here”, said Hans. Towers of ivory, streets of gold. Would the lords be kind to us? Would they let me in, with my Indian passport? At immigration, there was a blip: Had my passport ever been stolen? Why was it registered as Australian?
The question in my head went something like: So this is what it feels to be at he mercy of dodgy databanks and the mood of the assessment officer.
But it turned out ok. After a few questions, Officer Pena waived me through.
Did I have anything to declare, the customs man asked? Don’t touch my bag if you please, I have a haversack full of rainbow dreams, I mused to myself.
At the airport, the smiling face of Benny Zable, waiving a rainbow flag, greeted us. Benny, Nimbin’s ambassador to Woodstock, was the kingpin in the rainbow bridge to Woodstock and beyond. Benny had arranged for us to stay in Brooklyn, at the studio of Traci Mann, a New York tap dancer. Disoriented by jet lag, Hans had left his laptop on the airport bus. That first night, with the El roaring past our window, we fell into a troubled sleep, woken by the clatter of the El and the cries of children at the daycare centre below.

Through a Glass
Our first pilgrimage in New York was to the Yippie Museum in Greenwich Village. The Village was the bohemian hangout par excellence in the sixties. It still has a funky, if gentrified, look. Jazz bars and restaurants dot the streets. The Yippie Museum resembles the Nimbin Museum, with a stage for performances. One night, we caught some fine performance poetry. It’s the headquarters of New York’s hemp legalization campaign. They knew about Nimbin. They were also involved with a global linkup of cities for 2010. 1st Oct saw the launch of Mark Roselle’s book “Tree Spiker”. Mark Roselle is the founder of Rainforest Action Network. He’s also the man who infiltrated a Nevada test site. The day was also Benny’s birthday, Benny, an agent provocateur with his rainbow flags. The Yippie Museum was a happening place, true to its name of promoting green (sic) issues through direct action.
It took us a while to work out what ‘uptown’ & ‘downtown’ meant in the subway, but we had worked it out by the time we left New York! Hans slipped out one night for a dose of jazz; the girls went on a harbor cruise; Benny was beavering away at the Ecofest office. My jet lag meant that I saw the city as if through a glass darkly. One image remains: a black, immaculately dressed sax player, doing “In a Sentimental Mood” in the subway at 50th St.

Ecofest
The Ecofest office, off Broadway, was a hive of activity, presided over by Nanci Callahan, queen bee and director/producer of New York’s signature ecological fair, now in it’s 21st year. We walked to Central Park to check out the site for this year’s Ecofest, passing Strawberry Fields and ‘Imagine’, the mosaic tribute to John Lennon. On park benches huddled New York’s homeless, shrouded in grey, under the shadows of the tall towers ringing the park. The Dakota apartments where Lennon had been shot were across the street. “Yoko Ono pays for the maintenance of this section of the park and the homeless are permitted to sleep here,” Benny explained. I thought of our homeless in Byron, chased from bus shelters, their beach humpies a mark for rangers. In this instance, New York seemed to have a heart.
Sunday 4th Oct was a fine day. The Ecofest site began to fill up with vedors and exhibitors, including the latest hybrid cars from Toyota and Ford. We had been assigned the outer wall of the conference tent to set up the Rainbow Dreaming exhibit. Space restrictions meant only half the exhibit could be accommodated. We punched holes into the exhibition panels and strung them out on twine like washing on a line. It worked! Sayaka Nakao, Rina Terasaki and Saya Minami, our Japanese friends from Byron Bay, who had flown in the previous day via Tokyo to help with the exhibition tour, assisted us in this improvisatory task. Ever enthusiastic, our petite helpers were worth their weight in gold. Hans and I would have struggled to manage the show on our own.
Over 25,000 visitors streamed through Ecofest that day and, as we were positioned at the entrance, many of these stopped by to check the exhibit. Among these was Nirmala, Gina Lakosta’s daughter, who was in New York to perform a burlesque show, under the stage name La Viola Vixen. Another was a couple from Goonengerry, amazed to stumble upon a slice of life from the rainbow region in the heart of New York. Tap dancers, including the amazing Mabel Lee, Traci Manns’s former teacher, all of 80; soul singers; stiletto heeled models strutting eco fashions; Rick Ulfik from We the World, the global peace network; Parrots for Peace from the Amazon rainforest; ending with a sing along with Pete Seeger, 90 years old and still singing his peace and environmental anthems. The sun shone down on Benny Zable’s rainbow flags; children fed ducks in the pond; whole families happily picnicked under the trees; frisbees flew in the air. Catching the last of the sunset, the tall towers seemed to shower us with riches and green fields became fields of gold. The evening ended with drumming. Three drum circles – Cuban, Haitian and African – rang out in the Park. The moon was full and so were our hearts.

Postscript: Hans’ laptop, lost on our first night, was returned to him by the New York City Transport Authority on our last morning in New York, in a fairy tale ending to our stay in the Big Apple! 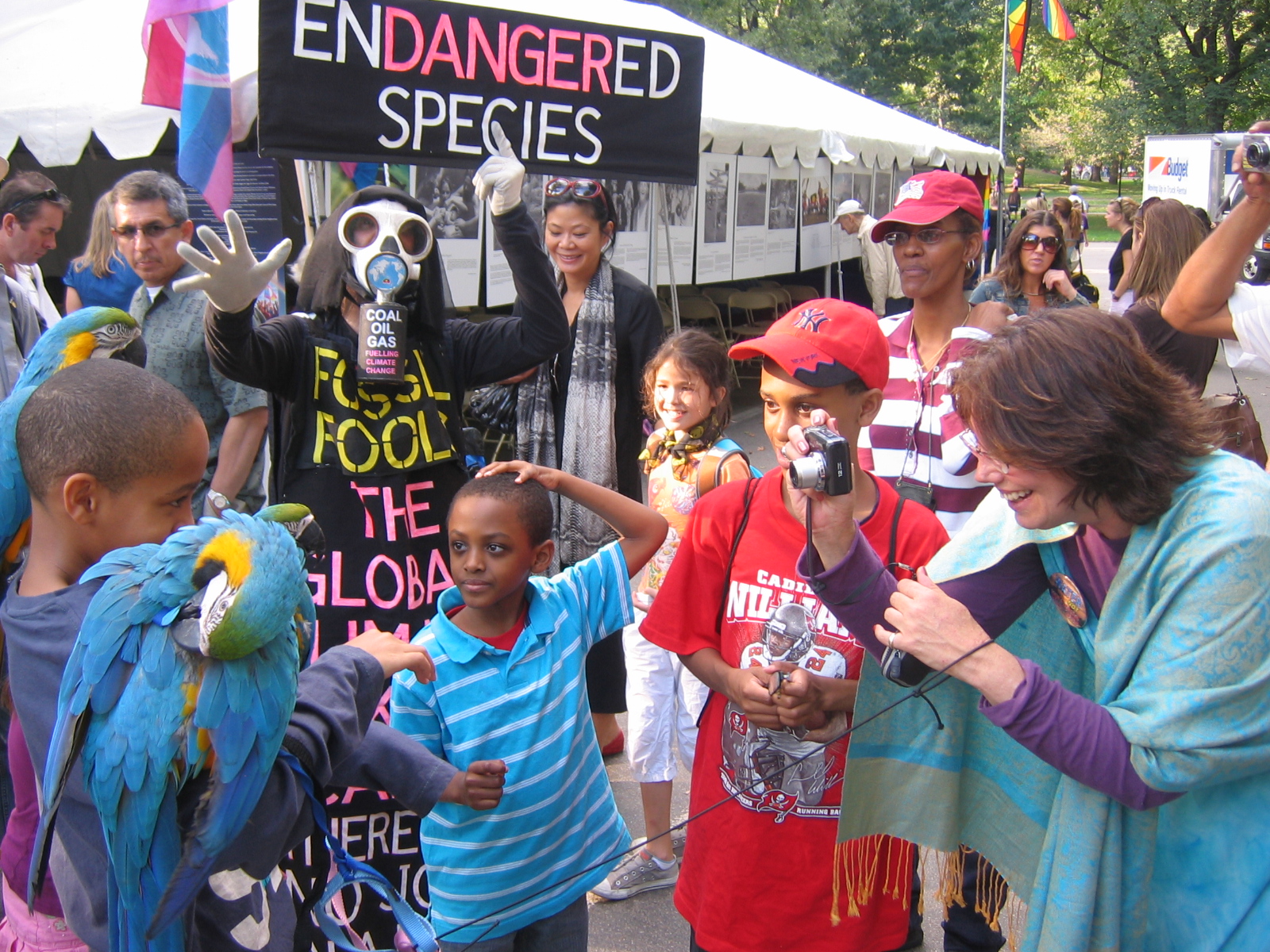 Comment by Harsha Prabhu on October 14, 2009 at 9:41am
Thanks Rozee. NYC was rushed. We hope to get another day when we get back on 21 Oct.
Am at Woodstock Museum, Saugerties, preparing for a show this wkend.
Cheers, h

Comment by rozee cutrone on October 12, 2009 at 3:47pm
i really enjoyed your tale of New york! It's a city with a very old soul i remember.