Once upon a time, when there was war and sorrow in the world, people came together, in a desperate trial to create peace, both in the outside world and within themselves. They gathered in a forest where they could see the Peace Queen, sleeping in her glass coffin. They knew she was not dead, just waited to be called back to life. So people prayed, sang and wrote poems to her honour. The forest's people knew, that only united they could succeed, so they kept together and fought in different ways for what they believed in.

But one day when they were on their way to the forest, They saw a big fence blocking the entrance. People panicked some left the group immediately and starting to look for other meeting places. But some stayed and fought to tear down the fence. Just to find it rebuilt when they returned. One member even paid a forester for a year to prevent the fence to be rebuilt again.

But it was to late. The members were already scattered for the wind and the Peace Queen, slept deeper and deeper and none seemed to reach her any longer . There were not enough; songs, prayers, speeches, blessings poems and pictures. Those who had stayed, now started to despair, and thought what’s the meaning, and they never got an satisfying answer to why the forest had to be closed down, despite that so many had been ready to give their souls to keep this meeting place alive.

Time went and the forest slowly started to die, when the maintenance had ceased. Some enthusiasts walked among the fallen trees and picked some branches to make small warming fires, which hopefully should be seen by the refugees. Other just arrived now and then to see if the queen was still there in her coffin, and so she was, why many started to cry when they saw the environment around her and quickly left the area. Some never returned…

So what happened then?

Since this is a Saga , the people and the symbols (about 100) on the picture are from the group “Saga Dream and Myth” we have the possibility to create our own ends.

When it comes to create Peace, we must not give up until we are able to write;.. and then the Peace and the people lived happily together ever after *smile*

(More about "The healing force of the Saga" in the blog "The Forgotten Children" on facebook. Welcome to follow)  http://apps.facebook.com/blognetworks/blog/the_forgotten_children/

Comment by melody on February 25, 2011 at 7:42am
Awesome!!!  Lot's of time and care put into your tapestries....Thank you for giving and sharing these translations for peace.  xx 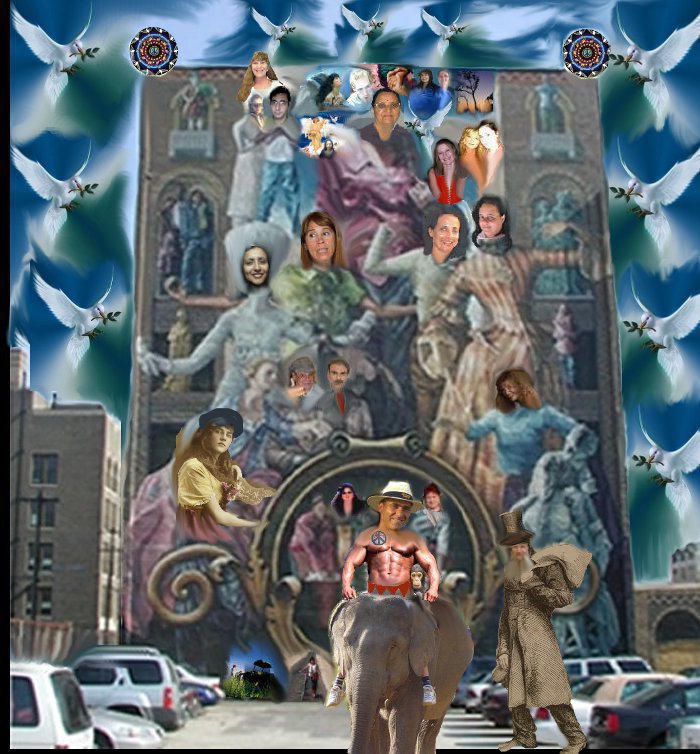 I will re post the link gunilla,just in case..:) I don't think was you did anything wrong. Because has happened several times in last 2 days??

I Love that you re created our little saga and truly enjoy the amazing image pic you made!! big big smiles

It is maybe me that have done something wrong Leah. I do not know so well how face book works.

But I wanted to share the collage and make us remember *smile* I thought I had lost it, but found it today and had to create a little saga;)

I love this gunilla :) for some reason when I clicked on the email update from facebook,that you shared a link on iPeace facebook page,it took me to my own profile? This has been happening over last few days with other peoples links,posts to the facebook iPeace page also,??will go to MY profile & I can't see the links on the iPeace fb page ?? A glitch maybe? because I've been posting a lot on the fb iPeace page,as iPeace admin. is very weird?