For thousands of years, many people have claimed that planets influence events on Earth. Other people have said this was superstition. No known mechanisms whereby distant planets
could affect Earth were known.


Now, with sensitive instruments and rockets that can travel high above the Earth, as well as orbiting satellites than can make nearly continuous observations, it
has been
discovered that Earth has a highly variable magnetic field and is radiated
continuously and variably by the Sun with streams of electrons and protons and
other particles, called ‘the solar wind’.


Observations have shown that both the Sun’s activity and the variations in Earth’s magnetic field are altered by the positions of the planets. This provides a physical mechanism
which links the planets to events on Earth.


I have observed links with some weather patterns, human personal behavior, and human mass behavior.


Links have been found to earthquakes, and links with volcanic eruptions are now being established. Ancient astrologers were right and modern scientific methods and instruments
are helping to validate many of their initial observations.

Sometime there will be big Earthquakes say many geologists and
geophysicists, and many psychics. No one knows when.


It is not Space Ship Earth - it is the entire solar system, a dynamic system, with continuous interactions. By enlarging the
context in which human behavior and natural disasters on Earth happen, new ways
of predicting and dealing with these potential calamities emerge.

This book explores some of my observations and those of other people. There is no end to it. It is more fascinating than any cross word puzzle and has important
usefulness for everyday life. 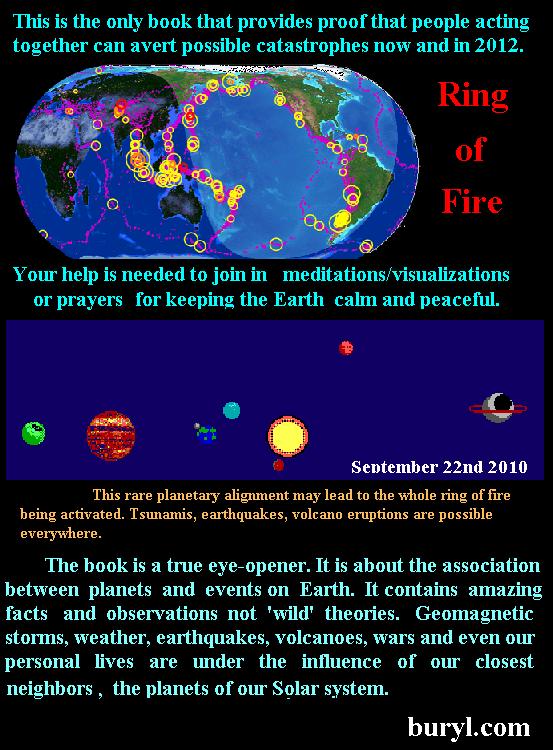